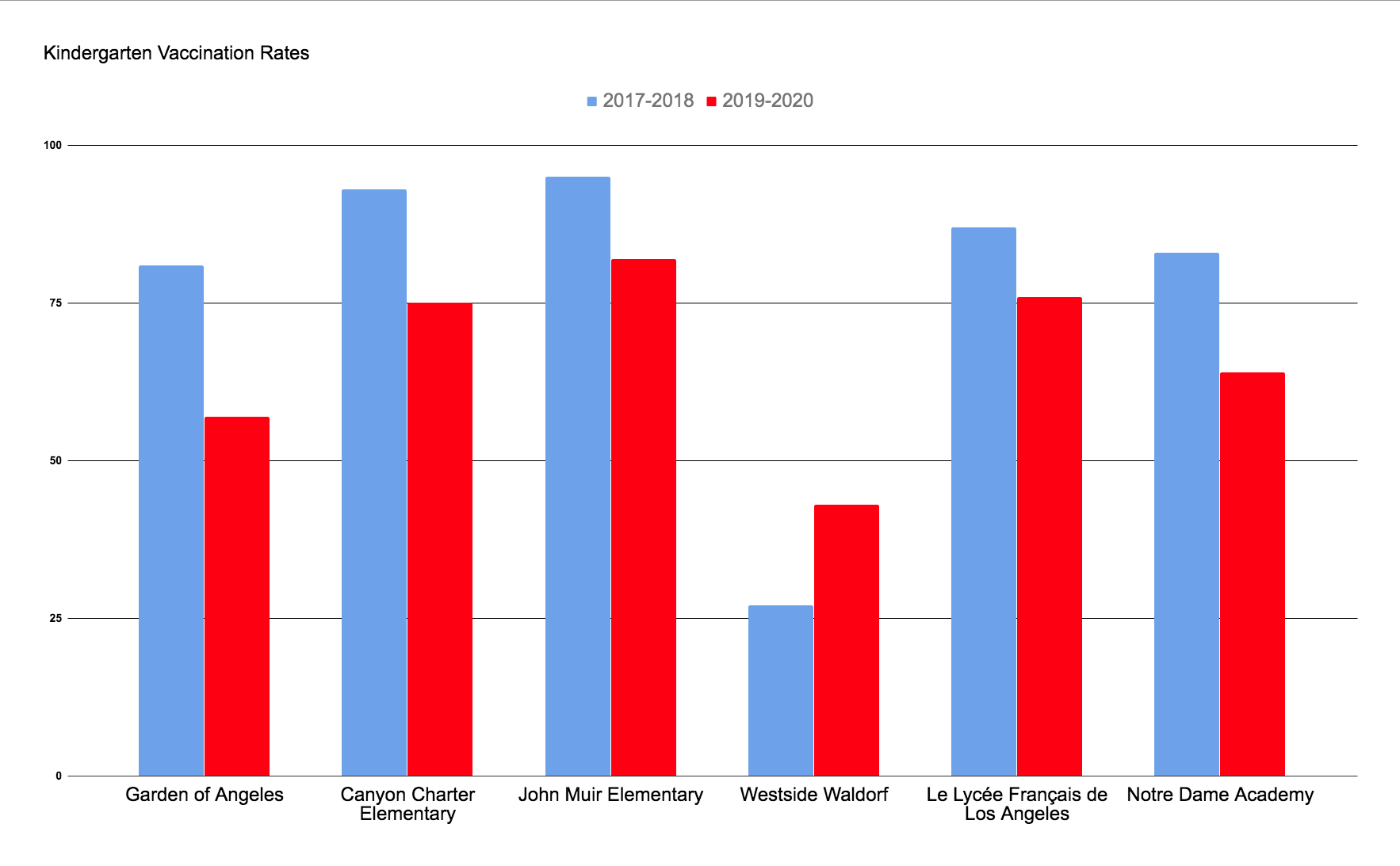 Less than half of students vaccinated at one local school

California law requires all children to receive certain immunizations in order to attend both public and private schools, but in the past year, the vaccination rate among many kindergarten students in and near Santa Monica are declining.

According to data released recently by the California Department of Public Health (CDPH), however, vaccination rates at three kindergartens on the Westside serving many Santa Monica families declined by more than 13 percent over the past year. At a fourth local school, while vaccination rates increased, less than half the kindergarten student body was fully vaccinated, according to CDPH.

Comparing data from 2017-2018 to data from 2018-2019 shows that at Garden of Angeles a private school located on 18th Street in Santa Monica, vaccination rates among kindergarteners decreased by 24 percent, from 81 percent in ’17-’18 down to 57 percent in ’18-’19. The vaccines included in the data are Diphtheria, Tetanus and Pertussis (DTP), polio, measles, Hepatitis B and varicella.

At another private school, Westside Waldorf located on Sunset Boulevard, while vaccination rates increased from previous years, according to CDPH data, the vaccination rate among kindergarteners in 2018-2019 was only 43 percent. The school did not report 2017-2018 data, but between 2015-2017, the rate was only 27 percent.

In an email to the Santa Monica Mirror, Westside Waldorf said that the school works closely with the CDPH and are “diligent” in informing the community that students not fully immunized may be excluded from school if necessary, but added that the school does not take a position on vaccination.

“The school does not take a position on vaccination nor do we advise families on medical decisions. We cannot speculate about why our vaccination rate is lower than some other communities, and we strive to put all students’ health and welfare first. We respect our families’ diverse perspectives on many topics but realize that families tend to make decisions about vaccinations long before they join our school community,” said School Administrative Chair Ellie Jenkins. “Our school is not anti-vaccine and we do not align ourselves with the anti-vaccine movement. Westside Waldorf school is an advocate of and for science and believe that scientific advancement is critical to a flourishing society. The majority of children in our schools are vaccinated and we follow California state law regarding vaccinations and exemptions.”

“We are an international school, thus welcoming many foreign students to our school – most of which come from France and other European countries where the Varicella vaccine is not mandatory and in some cases not recommended,” said Hillary Larson Marketing and Communications Director for Le Lycée, adding that the school takes “immunization compliance very seriously.”

According to the LAUSD, inaccurate information may be responsible for these apparent declines.

“The data you have is from the annual report all schools are required to submit to the state every Fall (usually October or November).  The reports we are running will include the most recent rate.  A student who may have been reported as non-compliant at the time the report was submitted may have since received their necessary vaccines and will be counted as compliant,” said Ellen T. Morgan of LAUSD’s Office of Communications, saying the District would provide the Santa Monica Mirror with more accurate data in the coming days. Check back for an updated version.