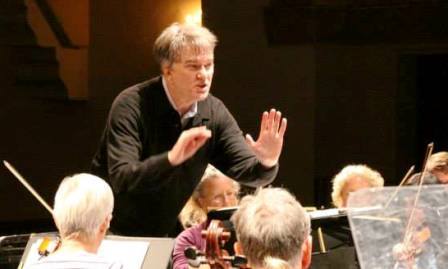 Music, music is in the air….except at Santa Monica College, where a personnel decision is potentially affecting over eighty musicians and hundreds of fans. A petition gathered by supporters of the Santa Monica College Symphony Orchestra has garnered over 292 signatures, included distinguished educators and members of our community. All of this to save the job of a symphony conductor who is a product of Santa Monica.

Dr. Brian Stone attended Santa Monica’s Washington Elementary, John Adams Junior High, and Santa Monica High School. He is an accomplished musician, teacher, and conductor. His curriculum vitae includes a BA at Vermont’s Bennington College, a Masters in Music Degree and a Doctorate at the prestigious Peabody Institute and a long stint at the University of Delaware as the Director of Orchestras. He received national recognition for the diversity of his music programs in Delaware. Brian was named symphony conductor of the Santa Monica College Orchestra in 2017.

“I have long known Brian to be an excellent conductor, beloved by his orchestra, with a depth of global music experience, not to be rivaled. Brian puts all of his self and heart into his art, the orchestra.”

Santa Monica schools nurtured Brian’s musical talents. Brian won prizes in music competitions as a saxophonist during his Santa Monica years from the Kiwanis Club, Bank of America and other organizations. He was the first chair saxophonist in the All-State High School Honor Band and was a top selection for the McDonald’s Disney All-American Band. At Samohi, Brian was a key member of outstanding ensembles. He studied viola, piano, improvisation, and composition in addition to his skill with the saxophone. He maintained his ties to his hometown music community by playing saxophone, viola, and celeste in the Santa Monica College Symphony Orchestra.

As director of the University of Delaware Orchestras, he developed a three-ensemble area of orchestral activities that doubled the enrollment, tripled the number of performances, and quadrupled the audience. His sophisticated programs, ranging from Baroque to Contemporary, and the Classics to Jazz, Broadway, and Hollywood received national recognition. It was this experience along with many other significant professional conducting accomplishments that led to Brian being named the conductor of the SMC Symphony Orchestra in the Fall of 2017.

In 2017, when the search began for a new conductor to lead the Santa Monica College Symphony Orchestra, the musicians believed that the opening required an extremely accomplished conductor and teacher. The conductor would need to be an individual with strong ties to our community, its history, values, a legacy of musical excellence, and its heart. The perfect candidate, Dr. Brian Stone, was available.

Brian accepted the position of conductor/teacher at SMC and set about the strengthening of music programming and the connection to the local community. Brian teaches music in a way that enriches the experience for his students and professional musicians.  Dr. Stone immersion in Santa Monica music education gives him strong ties to this community.  He consistently develops programming that reflects both Classical and Film music.  He is in tune with the rich musical history our community enjoys.

Under his leadership, the SMC orchestra has thrived. Brian halved spending and increased ticket sales while raising the quality of its performances.  Brian inspired many former Samohi musicians to join the orchestra.  He increased concert attendance and audience size. Audience members lined up after performances to thank him for his musical contributions.

It is rare for a community college orchestra to have a conductor of his status. The SMC symphony orchestra is playing at a high professional level under Dr. Stone’s leadership. It is also rare to have such a connection to both musicians and audience while creating an “approachable” feeling toward classical music.

Only about 4 percent of Samohi graduates attend SMC however over 45 percent of the orchestra are Santa Monica residents. The majority of whom joined at Brian’s invitation and have stayed because of his ability to make them feel valued. They were “honored to play under his baton.” He is a true ambassador for the  Santa Monica arts community and a liaison between education, music, and community involvement. He brings unity and a sense of equality and value to each member.

For two years under the direction of Brian Stone, the SMC symphony members have been inspired to give their time, energy, and talent toward achieving a higher level of excellence and making a notable musical contribution to Santa Monica life.

Orchestra members have recently learned that Dr. Brian Stone’s SMC contract will not be renewed despite glowing faculty reviews. This news is shocking and devastating. Members of our community have banded together to speak up loudly against this decision. Strong objections have been emailed to the President of Santa Monica College by Orchestra members & SMC music students.  Former SMC and SMMUSD faculty, teachers, professional musicians, audience members, Santa Monica residents and SMMUSD Alumni, and Arts organizations, are among those who have voiced their objections. Many attended an SMC board of trustees meeting

“Brian is a musical treasure; he is a brilliant conductor and one of the greatest musical educators on the planet. To lose Brian would be a tremendous loss to SMC and the Santa Monica community.”

“The entire community should take immense pride in the fact that Dr. Stone has decided to come home to give back to Santa Monica. To lose him would be a disaster.”

With so many issues dividing our Community, Dr. Stone has brought us together. He has reminded us of Santa Monica’s legacy of musical excellence, music accessibility, and inclusion. Without his leadership and vision, many orchestra members will not return.