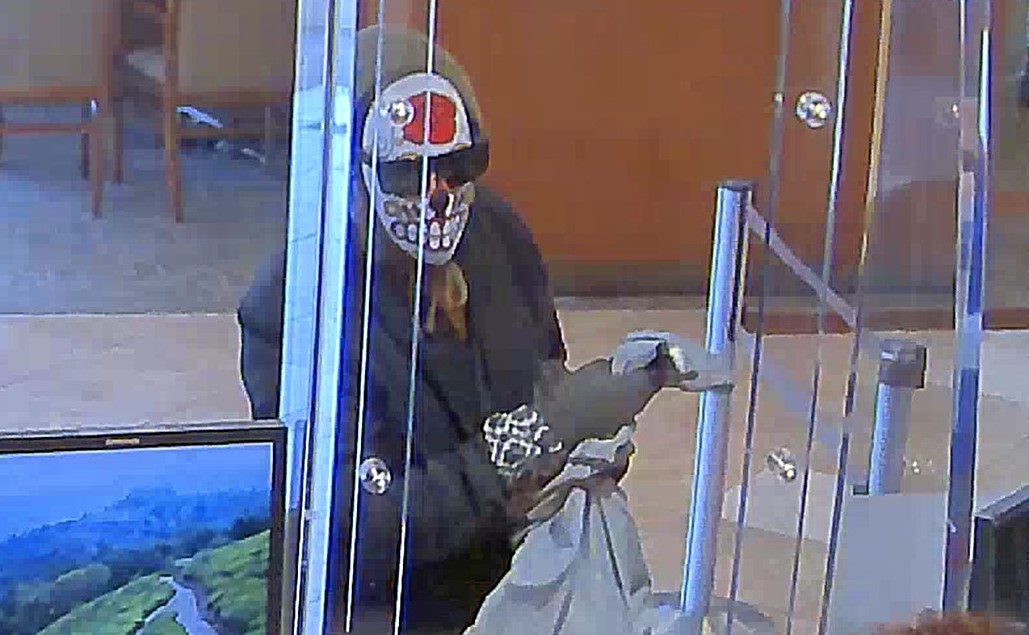 An armed bank robber who eluded a massive manhunt in Santa Monica stole between $3,000 to $5,000, says law enforcement officials.

On Tuesday, September 10, the Santa Monica Police Department (SMPD) received a call regarding an armed robbery at Wells Fargo on 10th Street and Montana Avenue at 9:51 a.m.

“The suspect who was heavily dressed in dark clothing consisting of a hoodie, gloves and a white ‘Day of the Dead’ type of mask entered into the bank carrying a long-barreled weapon and demanded money. The suspect received between $3,000 to $5,000 and left the location. The suspect was last seen jumping a wall to the rear of the bank and in the 800 block of 9th Street,” the SMPD said in a press release Wednesday.

SMPD officers were on the scene in minutes and established a perimeter-based on information provided by witnesses and residents in the area and attempted to locate the suspect, described as 6 foot 4, 200 lbs, armed with a double-barreled shotgun and wearing a dark trench-coat. Aided by the Culver City Police Department, Beverly Hills Police Department and Los Angeles Police Department S.W.A.T. officers, among other law enforcement personnel, a massive manhunt ensued within a perminter from 11th Street to Lincoln Boulevard and Montana Avenue to Washington Avenue.

Despite the scale of the search, which included SMPD’s tactical weapons unit and multiple K-9 scouts, by 3 p.m. law enforcement called off the search saying they were unable to locate the suspect and a shelter order for residents and school lockdowns at Roosevelt Elementary, St. Monica’s High School and First United Methodist were lifted.

“The suspect was not located. We understand this has been very stressful on the community and appreciate your patience and understanding. We will continue to provide updates should any additional information become available in a new message,” the SMPD said at 3:40 p.m. Tuesday.