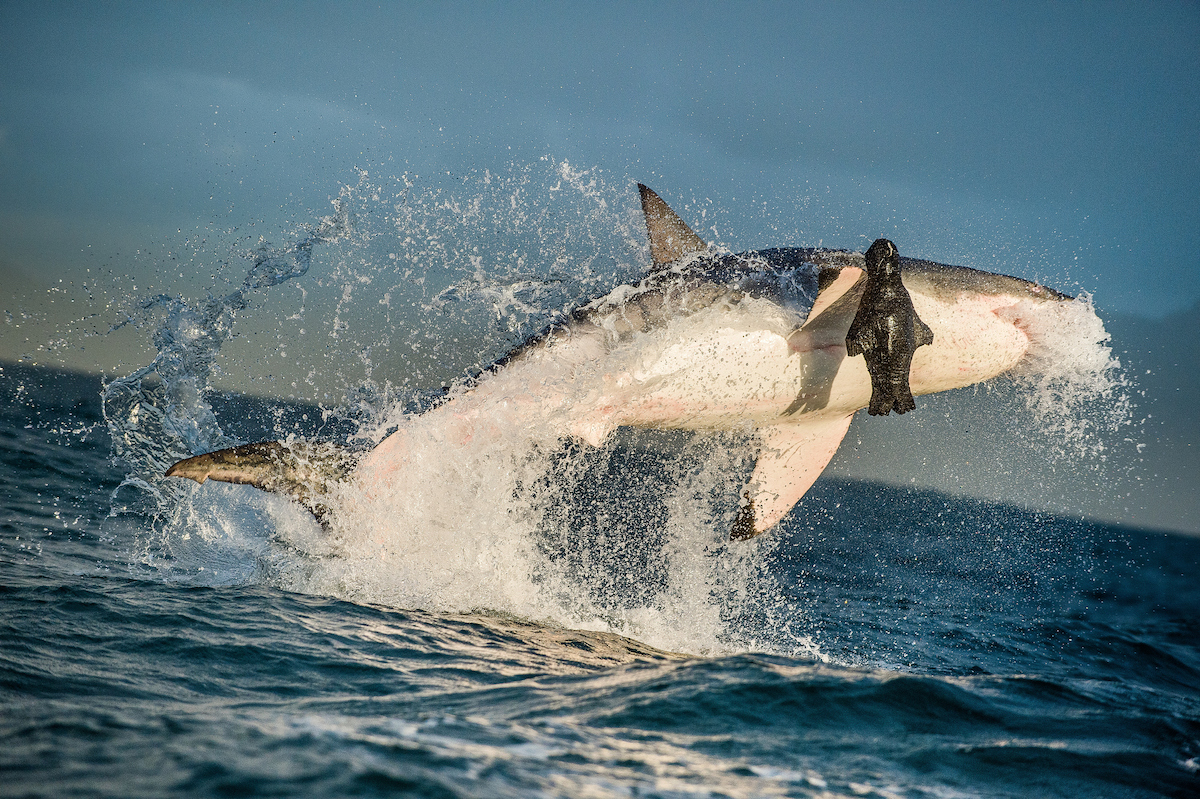 While shark attacks in California are rare, breachings, particularly towards the end of summer, are not.

Several shark sightings have been reported in Santa Monica Bay so far this summer, including two caught on camera on July 5 and August 7 at the popular Sunset surf spot in Pacific Palisades. On August 25 Shacked Magazine reported that another shark was spotted breaching at Sunset, and on September 9 Shacked reported three additional breachings.

Breaching is a hunting method used by sharks to catch fast-moving prey. Sharks can swim 40 miles per hour and fly as much as 10 feet into the air.

“It is very common to see young white sharks in Santa Monica Bay and throughout Southern California, especially in the late summer and early fall,” said Kristen Macintyre, communications manager at the California Department of Fish and Wildlife (CDFW). “Mako Sharks, which look quite similar to White Sharks from a distance, are also found in the area and are well known for their leaps out of the water.”

On July 13 Owen Dirkse was surfing near Bay Street in Santa Monica. It was 1:00 p.m. and he had been on the water about 2 hours. The sky was clear with a very mild breeze and an estimated air temperature of 79 degrees Fahrenheit. The ocean was calm with 2 – 4-foot waves over a sandy ocean bottom 8 feet deep. Estimated water temperature was 68 degrees Fahrenheit. No marine mammals were observed in the water.

“Earlier into my surf session another surfer asked me if I had seen a shark swim past. He said that it was a juvenile and didn’t seem to have any interest in us. Later, after about another hour and a half of surfing, I saw the shark swim almost directly beneath me. The shark was roughly 5-6 feet in length and appeared to be a juvenile. It was just swimming through the lineup (surfers) and was not aggressive. I thought that it was relatively close to shore as it was low tide so we weren’t any further out than 50 feet from the sand.”

The shark left the area and was not observed again.

According to Los Angeles County Lifeguards, over the last few years in the Santa Monica Bay, shark sightings and encounters have become more frequently reported to lifeguards.

“The presence of these animals is an indication that environmental efforts have been successful and that the bay is recovering, and scientists expect a localized increase in all shark species,” the department said.

While juvenile sharks might be shocking to see, they’re a part of the natural balance of the ocean’s ecosystem. Macintyre explained, “White sharks are an important part of the marine ecosystem, playing a critical role as a predator. Young white sharks feed on the abundant stingrays found nearshore in Southern California and prefer the warm water found along the coastline. As they grow, they tend to move offshore into cooler waters.”

From the 1950s until May of this year, according to the CDFW, there have been a total of 185 shark incidents. Shark incidents are defined as documented cases where a shark approached and touched a person in the water, or their surfboard, paddleboard, kayak, etc. Of the 185 reported incidents, 13 were fatal, 102 resulted in non- fatal injuries and 70 experienced no injury.

As beachgoers flock to the ocean to bask in the remaining days of summer, they’re reminded that while the ocean is a source of fun and relaxation, they should still be aware of its dangers. “Anyone in the ocean should recognize that it is a wilderness, with associated risks from both animals and the ocean itself,” said Macintyre. “The only way to eliminate the risk of a shark encounter is to stay on the beach.”

The public is encouraged to report any shark sighting, encounter or attack to the Shark Research Committee at http://www.sharkresearchworldwide.org/formstart.htm