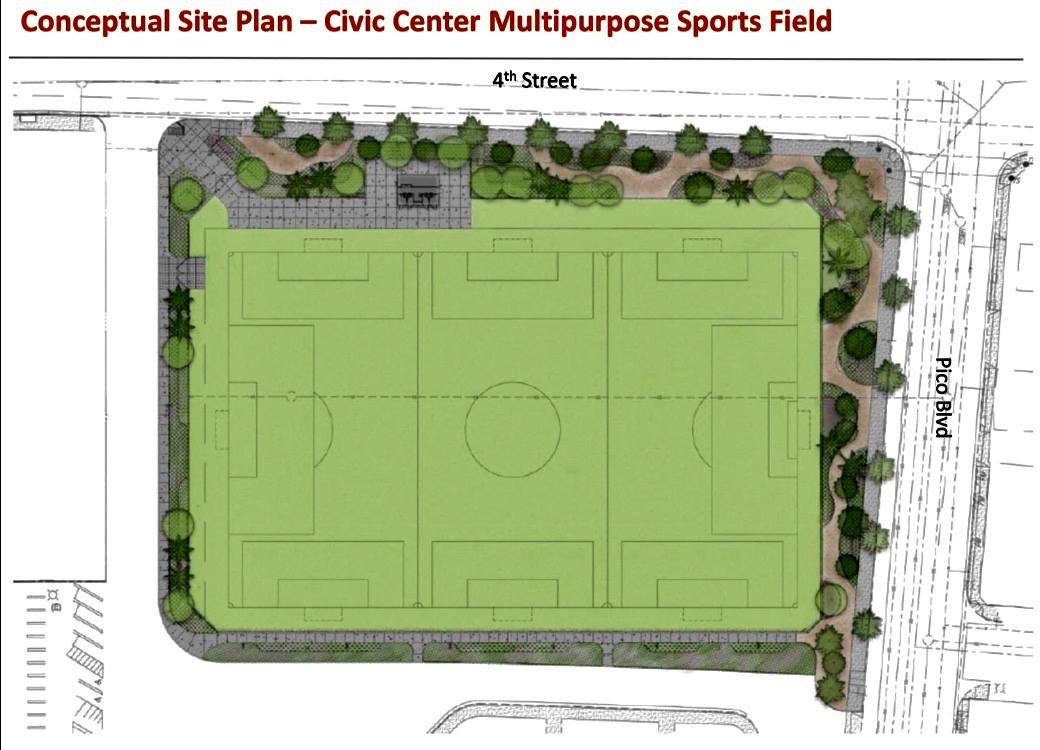 Last week’s article covered the start of the community effort to get a new multipurpose sports field at the corner of Pico and 4th Street. After months of deliberations, on July 2, 2002 the City Council formally placed the playing field into the Civic Center Specific Plan. While this was a significant victory for the sports field advocates, it was just the start of a 17-year odyssey that culminated in the field’s groundbreaking on August 27, 2019.

The obvious question is why did it take so long to start building something that is basically a flat plain with a fence, bathrooms and lighting? The reason is that civic groups treat any public open space in our built-out city, as an invitation to grab it for their own purposes.

An early encroacher was the Early Childhood Education Center, a teaching preschool run by Santa Monica College that was originally proposed as a small building on the SW corner of the field. It slowly ballooned three times to the size you see it today under construction occupying the entire third of the north edge of the field.

Eventually the school district, which mysteriously had been a surprisingly passive advocate for the field (although individuals had spoken in favor of it) finally weighed in with a valid proposal to put their parking lot under the field and offered the City $50 million dollars of their funds to split the cost 50/50. While this would not have reduced the field size except for the entrance ramps, the negotiations between the City and the School District took so long that a year went by before the School District’s offer was finally turned down by the City Council. Everyone understood that School District’s proposal was an obvious solution to avoid the loss of parking, however the additional funding, design and construction complexities (including a huge underground storm drain), with their attendant delays, made the field advocates less than happy.

Meanwhile the 2008 recession had kicked in which totally stressed the City financially. This global crises also triggered the loss of Redevelopment Funds (which could have funded the field) when the State clawed back that funding source to help balance its own budget shortfall. Into this maelstrom came a new City manager, Ron Gould, whose major impetus was to keep the City solvent. Unlike the current City manager’s, Rick Cole, whose eloquent support of the field pushed it to realization, Ron avoided being an advocate for the field so the field project languished once again.

Then the field got caught in the Civic Center hotel vortex. Our half century old landmarked auditorium was deemed to be seismically unsafe, unsuited to contemporary performance requirements and not handicapped accessible. Its upgrading was estimated in the $50 million range: well beyond the City’s tight budget so a proposal was floated to build offices and a hotel on the Civic Center parking lot and use the rents generated to pay for the auditorium rehab. A citizen’s working group was established that was ready to sacrifice the field for the hotel, but Phil Brock single handedly organized a public defense of the field so that it survived probably its worst death threat.

While the city was now relatively solvent, and could afford the field’s “low” cost, originally estimated at about $2 million, the last obstacle to its realization was created by the Coastal Commission’s insistence that the parking, that was going to be lost, was essential to public beach access. The City argued that the “new” parking structure built north of the field was built for exactly the replacement parking required by the field’s construction. Months of studies and negotiation carried the day and the Coastal Commission finally green lighted the project.

Through these seventeen years countless unpaid individuals stand out for their vision, stamina and field advocacy. This is by no means an exhaustive list and I apologize for any ommissions, but significant contributors were Chris Harding, Steve Mount, Neil Carey, Vincent Landay, plus recently the rugby and lacrosse leaders. However, three women were really the heroines of this entire saga. First was Maryanne Laguardia using all her skill developed from decades of marshaling AYSO coaches and the Sports Advisory Council, she was the most consistent and effective field advocate bar none. If anyone should get naming rights its Maryanne. When our airport closes, it might be nice to have our own Laguardia Feld.

But just as every baseball team has a “closer” to win the last inning, when fatigue and cynicism were setting in and people were starting to wonder if the field was ever going to be built, two angels appeared. Disguised as co chairs of the SAMOHI PTSA Civic Center Task Force, Jaleh Mirhashemi and Ann Bowman Hoover, performed the miracle of pushing the field over the finish line so to speak. During these last years, their very effective community organizing and no holds barred advocacy was essential to finally realizing the field. In fact they will be honored by the Kiwanis on Sunday September 22nd 11:30 am at the Santa Monica Elks Lodge for their vital contribution.

Many worthy community projects undergo similar lengthy but unnecessary delays. These extended timelines burn out their volunteer advocates and in this case an entire generation of high school students and citizens was denied the use of this easily obtainable resource. Our wealthy City needs to be more nimble in actualizing such public benefitting projects particularly as we deal with the worsening challenges of housing affordability including homelessness, traffic overload and that 800 ton gorilla: global warming.

I hope to see you all at the Sports Field’s Grand Opening in the summer of 2020.