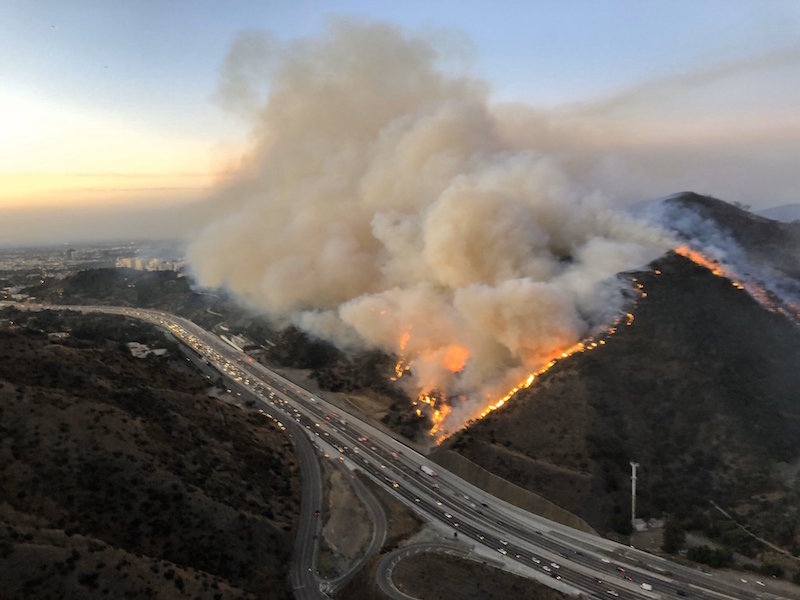 A fire burning over 600 acres near the Getty Center is forcing evacuations orders for Pacific Palisades and Brentwood among other areas in the Westside. As of 3:00 p.m. Monday the fire is 0 percent contained and has destroyed 8 structures and with strong Santa Ana winds forecasted for Wednesday, firefighters are working hard to make progress in the next 24 hours.

The fire, at 618 acres as of 3:00 p.m., is described by the Los Angeles Fire Department (LAFD) very dynamic and westward-moving and is threatening over 10,000 structures both residential and commercial. According to the LAFD, at least 8 homes have been destroyed and 5 have been damaged. There has been no reported loss of life.

The cause of the fire is under investigation though Los Angeles Mayor Eric Garcetti says arson investigators have ruled out a homeless encampment as the source.

“This dynamic fire has been moving largely in a westward direction, fanned by Santa Ana winds. We are anticipating a favorable change in wind conditions as the day progresses. Firefighters continue to actively protect structures throughout the evacuation zone,” said LAFD Spokesperson Margaret Stewart.

At 1:14 p.m. the Los Angeles County Department of Public Health issued a Smoke Advisory for northwest coastal LA County, Central Los Angeles and the San Fernando Valley. The City of Santa Monica has suspended outdoor activities for the remainder of the day. These include CREST, the Santa Monica Swim Center, Memorial Park and Reed Park tennis reservations and outdoor field permits.

According to the LAFD, the fire broke out around 1:30 a.m. near the southbound side of the 405 Freeway at Getty Center Drive near the Getty Center museum.

The borders of the Mandatory Evacuation (RED) Zone are:

Visit https://www.lafd.org/news/getty-fire for the most up to date evacuation information.

The City of Los Angeles Emergency Management Department has announced that all residents displaced by the fire who need overnight arrangments should go to Palisades Recreation Center or Westwood Recreation Center. These sites will have food, as well.

“Back the car into the driveway, open garage doors, collected pets into one room so they are easier to gather, and put your “go bag” and other things you want to take with you in the car. If you are in the evacuation warning area and will need additional time to evacuate, leave now. If you see sparks or embers in your neighborhood or feel threatened by the fire, leave now,” the LAFD said in an emergency alert.

Over 600 LAFD firefighters are fighting the blaze with assistance from neighboring agencies. The cause of the fire is under investigation.