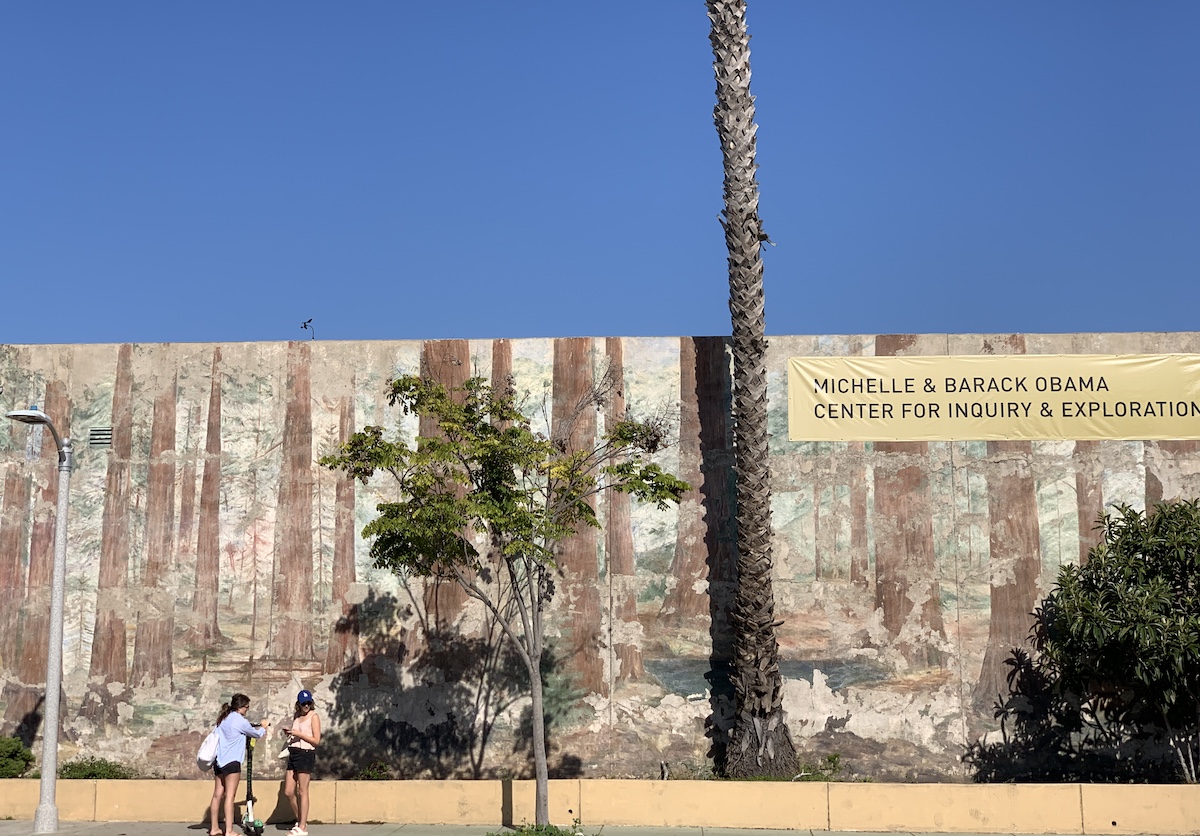 On October 17, Santa Monica-Malibu Unified School District (SMMUSD) board members are expected to discuss the potential removal of the Muir Woods mural. The future of the mural was originally scheduled for discussion during an October 3 meeting in Malibu.

The Muir Woods mural was painted in 1978 on the walls of the John Muir Elementary School at the corner of  Lincoln Boulevard and Ocean Park Boulevard. The school relocated to another campus in Santa Monica over 20 years ago and eventually became Olympic High School. The entire facility, which includes other education based programs and centers, was renamed the Michelle and Barack Obama Center for Inquiry and Exploration.

According to SMMUSD, removing the mural, which has eroded significantly over time, and painting the southeast walls the same color as the rest of the school is a necessary step in rebranding the look and feel of the campus to better reflect the students, staff and programs.

Members of the Save the Muir Woods Mural campaign, however, are adamant about preserving the mural. “The issue of the Muir Woods mural has NEVER been put on a School Board agenda for public discussion in all the 5 years since the Save the Muir Woods Mural campaign began!” said founding member Jerry Rubin in an email. “It would be VERY UNFAIR for the School Board to approve the Board’s staff recommendation to get rid of the mural when there are so very many good environmental and art preservation reasons to keep it!”

Rubin added that the Obamas’ names could be placed boldly along the large wall space under the mural and twice if necessary along Lincoln Boulevard and Ocean Park Boulevard.

“It is highly doubtful the Obama’s would object to their names being located next to.. and associated with.. a newly refurbished Muir Woods mural,” Rubin continued. “The Obama’s are very dedicated to the environment, preserving forests and honoring important and meaningful art. Surely we can do both.. save and completely redo the ‘Muir Woods’ mural (with lead-free paint) at its current location AND support the creation of the Obama Center at the Olympic High School site!”

The fate of the Muir Woods mural comes months after the process to remove the Millard Sheets “Pleasures Along the Beach” glass mosaic began. Much like the mural, many members of the community considered the Millard Sheets mosaic to be an important and rare piece of Santa Monica history and public art.

In an open letter to the public published in 2014, the artist behind the Muir Woods mural, Jane Golden, wrote, “I had no idea in 1978 when I painted this mural that one day it would be the centerpiece of a community discussion that includes conversations about art, education, preservation and the environment.”

“On the one hand it was about creating a spot of beauty on Lincoln Blvd, but the mural was also always meant to be a powerful reminder of John Muir and the legacy he left, inspiring us all to think about how much we need to be stewards of our land and guardians of the future”

Golden continued, “On the one hand it was about creating a spot of beauty on Lincoln Blvd, but the mural was also always meant to be a powerful reminder of John Muir and the legacy he left, inspiring us all to think about how much we need to be stewards of our land and guardians of the future.” Golden added, “…given the global environmental crisis that society has brought about, it is perhaps even more relevant today than it was 36 years ago when I first painted it. Please know I am humbled and honored by this and I look forward to the day when I can come out to Santa Monica and restore the mural back to its original state.”