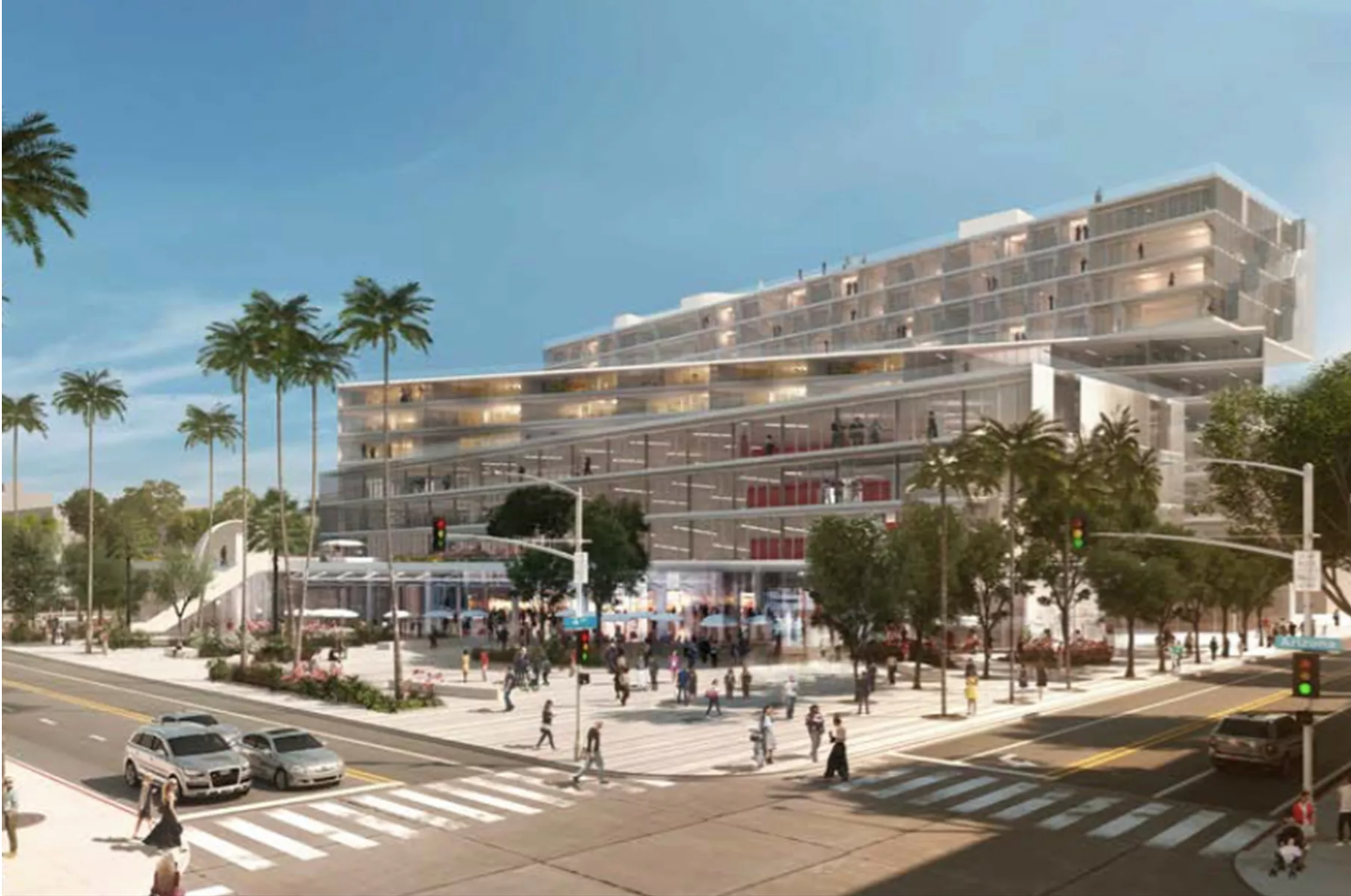 SMa.r.t. group’s note: The Plaza at Santa Monica project, at 5th and Arizona, has been generating controversy since it was originally proposed several years ago. After years of discussion and opposition by many residents, the project, as proposed, remains little changed and will be coming up for approval soon. This article, by our colleague Ron Goldman, was originally written some four years ago and remains astonishingly current.

What defines some of the greatest cities in the world? Their grand plazas and public spaces. A place where one goes first when arriving at a new city and returns to many times while there. The same could be true for Santa Monica. There could be a place to gather for public events and an animated social environment that would activate the downtown area providing a venue for civic events and respite from our busy lives.

But apparently our City Council is in the midst of an identity crisis. They believe that we should live in a different, much denser urban environment. They believe that we need a massive iconic building called the “Plaza at Santa Monica” on city owned land at 4th/5th and Arizona to attract visitors, one that will little serve our residents. But we already have the Pacific Ocean, our beach, our Palisades Park, our historic pier, our promenade, our courtyard housing, and our relaxed beach culture with its open skies, sunlight, moderate temperature – assets in abundance! They must think they are working for those who would develop the City for profit rather than those who live in it.

We live in a democracy of gratification and this head-in-the-sand approach leads to a mindset of development and profit rather than quality of life. This project would be a beacon for unbridled growth, with every developer rightly claiming the same height for their own project. “Greed and density” on the part of the City are not synonymous with “quality of life.” Do we need a down-town begging for tall and wide buildings casting huge shadows, and that will fatally compromise the city’s soul and character? The soul of our city is not massive building blocks stacked 128 feet tall (actually much taller when taking into account rooftop accessory structures).

The size of the Plaza at Santa Monica (an offspring of Rem Koolhaas’ Singapore project http://www.theinterlace.com) will create significant traffic, cut light and blue sky, cast enormous shadows on adjacent properties, increase demand on infrastructure and services, and most importantly waste this site’s potential. This is a highly questionable precedent to set, and worst of all, totally unnecessary.

If we were to draw a plan of our growing downtown, this 2.9 acre parcel is the new center of gravity with shopping, dining, and living spreading north, east, south and west – and should be used for creating a sense of place for residents, employees and tourists to enjoy. We believe what is needed to complement and support the four million square feet of downtown commercial and residential area now being developed is a park with shade trees and fountains, concerts and public art, ice skating, event venues and open air markets. A place for residents, commuting workers, and visitors to recreate or rest – at street level where people will use it rather than rooftop levels 20, 58, and 96 feet above the sidewalk as is being proposed in this plan.

On city-owned property, creation of parks should be the 1st choice. An urban park in this area would fill a huge need with the growing number of families living in downtown apart- ments. Parks are an integral part of our active and passive well-being, of our quality of environ- ment and life. Remember the “Well-being Challenge” to measure and increase the feeling of well-being for residents, visitors, and employees? If one needs further convincing, look at Bryant Park (www.bryantpark.org/) or Post Office Square (www.normanbleventhalpark.org/).

This is public property, it is the residents who own this property, and the City has the highest obligation to do the best for the public good. We cannot let this site be squandered on a project that neither meets the needs nor the will of Santa Monica’s citizenry. We’re advocating making this a remarkable town square which will bring the community back into downtown. These open spaces are priceless. Let’s hope the city can turn a “poverty of ideas” into a “wealth of well-being” by turning a massive mistake into a genuine benefit for all.

Every city needs a “raison d’etre” – a spirit why people want to go there and stay there. So what will define our ethos as a City? Will it be an over-scaled commercial building that dwarfs the downtown area casting its shadows for blocks around or a grand square that invites all who enter? This property is already public land and should remain so. Is tall and dense, massive and traffic our “raison d’etre?”

We don’t think so.

By Susan Payne Gardens serve a purpose, never more than right now. For Geri Miller, founder and CEO of Home...

Celebrate the Holidays While Supporting Our Local Food Bank.

Holiday Decorations and Recipes with Pomegranates