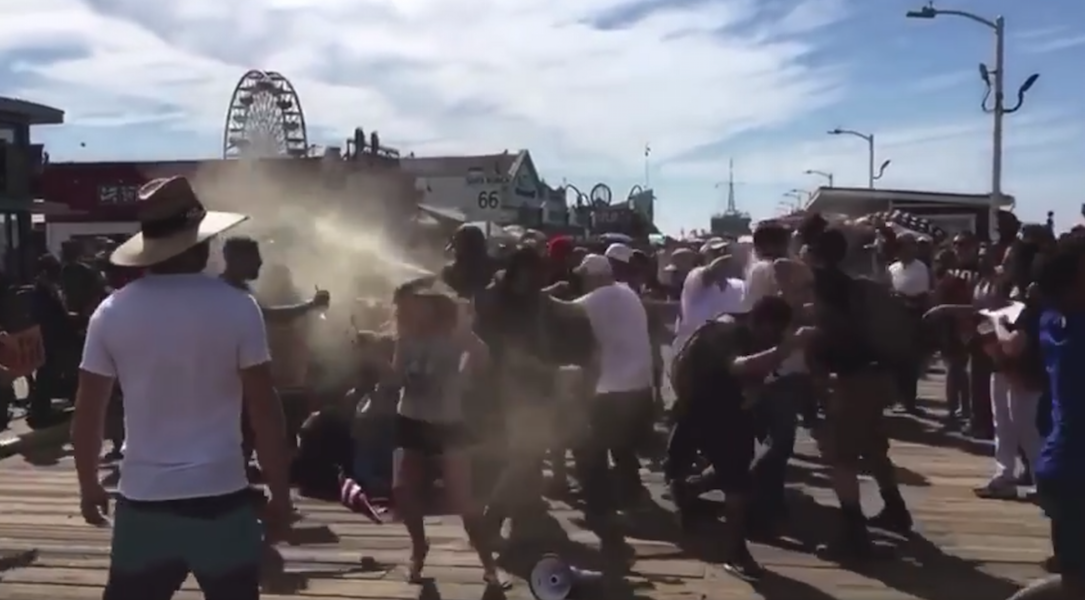 Over the weekend a man wearing a “Make America Great Again” cap was arrested on the Santa Monica Pier after spraying a group of anti-Trump protestors with bear repellent.

According to Santa Monica Police Department (SMPD) Lt. Candice Cobarrubias on October 19, 2019 at approximately 1:20 pm, officers working the Pier observed a fight between two groups of protestors. One of the protestors, later identified as David Dempsy, dispersed a canister of bear repellent into the crowd. Numerous protestors and non-involved pier patrons were affected by the chemical.

“Mr. Dempsey was immediately detained by officers. Harbor Services Officers and Santa Monica Fire Department rendered aid to those affected by the chemical agent. Protestors from both groups dispersed after the incident but were monitored by officers in the event another escalation started. No further incidents occurred,” Cobarrubias said.

As seen in a YouTube video posted by Be Less Stupid, Dempsey wearing a red “Make America Great Again” hat, sprayed protestors with bear repellent who had marched onto the Pier following a rally organized by Refuse Fascism calling for President Trump and Vice President Mike Pence to be removed from office.

“It was these f—ing libtards over here, man,” Dempsey told police in video. “These commies — I didn’t do anything.”

A group of Trump supporters followed the protesters to the pier. The groups exchanged insults for around 10 minutes, according to the Los Angeles Times, before shoving one another and yelling obscenities. That’s when Dempsey pulled out the bear repellant video shows.

Police cornered Dempsey soon after the incident and detained him near the police substation on the Pier.

Dempsey was arrested for 22810(G)(1)PC-Prohibited Use of a Tear Gas Weapon, 244 PC – Assault with a Caustic Chemical and 34559(c) PC – Poses Unreasonable Risk to Public Safety. He is being held without bond and is scheduled to appear in Los Angeles Superior Court for an arraignment hearing on Tuesday.

According to LA County records, Dempsey was previously convicted of burglary in 2006 and 2009 and of larceny and conspiracy in 2012.