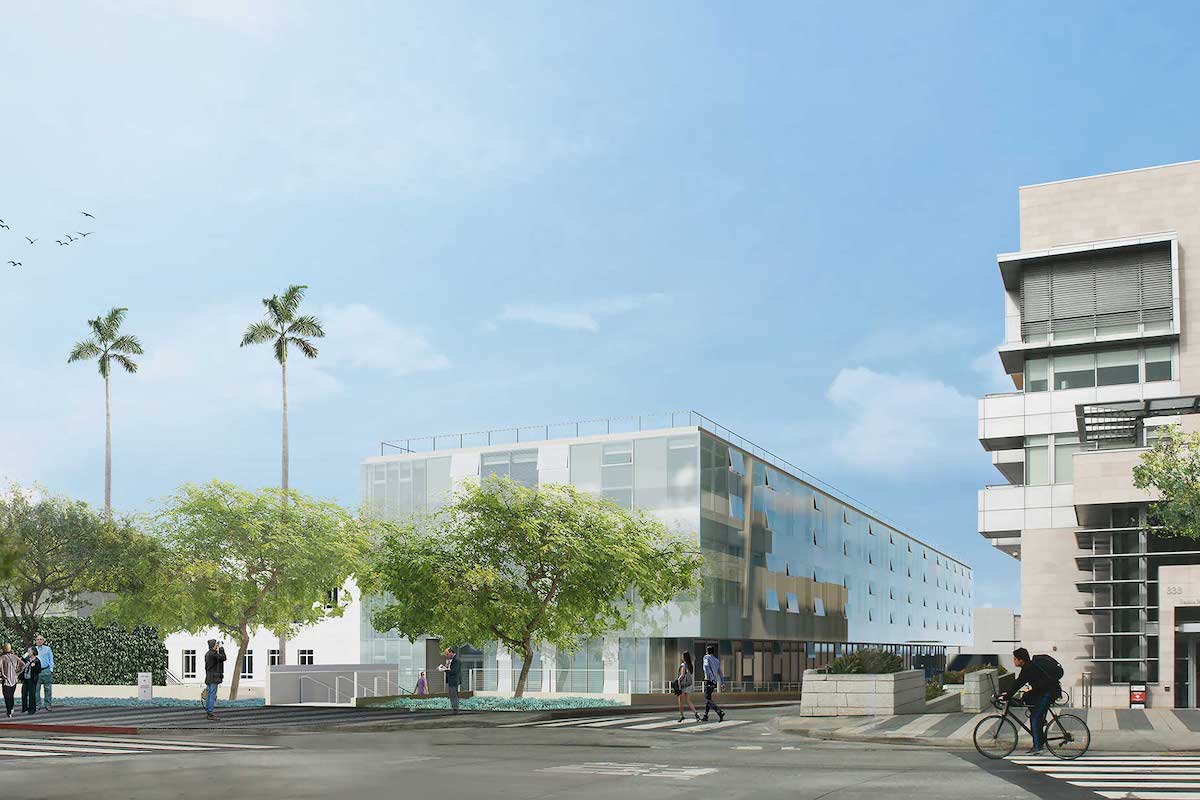 Santa Monica’s residents may have noticed a new office structure that is nearing completion adjacent to our historic City Hall. If you were wondering what it is, it’s the City’s new Administration wing. The project’s design is in response to the Living Building Challenge whose goal is to promote the adoption of the latest in sustainable technology for large public projects.

The program outlines a design program that advances the “highest standards of sustainability”. It goes beyond the normal ‘checklist’ to include a series of performance goals and benchmarks that must be achieved to attain their highest rating. Their goal is to encourage competing project teams to find new, creative ways for buildings, with differing challenges, to attain sustainability. Our City rose to their challenge and claims that when Santa Monica’s new City Administration building is completed, it will be the ‘greenest municipal building in the world’. In addition, they project that it will pay for itself in 15 years. In my opinion, both claims are suspicious.

To quote from their challenge statement: “When we look at the people, planet, and place, it’s great to be environmentally sustainable but we also have to be financially sustainable”.

We couldn’t agree more… but it remains to be seen if we can even come close to achieving their optimistic goals for costs or efficiency. The building incorporates technologies for water, waste, and energy designed to minimize waste. It claims that it will attain water self-sufficiency by 2023 and carbon neutrality by 2050”. Rainwater will be treated on-site and composting toilets will use what’s left to produce an “edible landscape” with fresh fruit, produce and herbs… any takers? The City claims that we will be the first in the state to drink our rainwater and harvest food from our toilet’s compost. All office workers will be within 30 feet of natural light and thus cooled by the many operable windows. Their goal is to create the “benefits of productivity, health, wellness, and happiness while at work.”

“When City leaders, under the guise of environmental shepherds, stray from their stated duty, they need to be held to account for their actions. To do otherwise is to squander our limited means to protect both our environment and our residents. The current “half-baked” planning decisions and their consequences are neither sustainable nor acceptable. To put short-term gain before long term community and environmental needs is not the path to sustainability.”

These are the claims were taken from a recent press release by our City. While they are all admirable, one wonders if they are accurate, attainable or just wishful thinking. We should know soon if this project can achieve its goals and thereby serve as a viable model for other similarly sized cities. If not, it will be no more than a costly “vanity project”. One that will not serve as a model for our future and may even require more City funds to make it function properly. If so, it will be an even more expensive gamble of City’s funds with even less redeemable value.

The estimated cost of the project is 85 million dollars. If so, the 50,000 sq. ft. building would have an estimated square footage cost of $ 1,700/sf. For comparison, this is 350% more than a custom designed building! If one were to add the bonded financing costs from the 85 million dollar loan, at current rates over 20 years, its total cost would double to 170,000 million dollars. For perspective, if this cost were to be spread out across our City’s population of 93,000 residents, it would amount to a debt of over $1,800 for every man, women and child in the City. While the project may be “environmentally sustainable”, it is certainly NOT “economically sustainable” as specified in the Sponsor’s goals statement. It also remains to be seen if it will provide a viable path to sustainability in the future or be no more than a vanity project with its extravagant waste of funds. A much safer and attainable goal might have been to put solar arrays on our public buildings (e.g. schools, libraries, city hall, etc.) at 1/20th the cost with guaranteed results.

On the other end of the ‘sustainability spectrum’ is a new building proposed by a private developer on City owned land in the heart of our downtown. This 12-story project will not comply with current codes nor will it meet even the minimum standards for sustainability. It will be a private project built on public land that was originally purchased by the City for low-cost housing. It is likely to generate more traffic, pollution and use more resources than will be saved by the proposed Administration project. In addition, it will block sunlight, create gridlock in the center of our City where merchants are already leaving and leave our residents suffering from shade, traffic, pollution and lack of open space. The irony of our City overspending for a sustainable project while simultaneously allowing for the construction of a non-sustainable project is perhaps lost on our City leaders. Ironically, as our City Manager has stated in the past that ” “iconic buildings do not make great cities or environments, human scaled buildings that relate to each other do … every city has its own character and Santa Monica should not stray from its identity.”

In regard to economic sustainability, we’ve just been told that water rates will double in the next 5 years to guarantee funding reserves while spending an extra $100 million for the city hall annex, the city is busy building a $2.3 million restroom at Clover Park ($4,600/sf !!) which is months overdue, a $.5 million mural in a back stairwell in city hall, $9 million budgeted for outside public relations, and of course the $25 million spent to fight district voting in order to save their council seats. And all this while the city’s busy running meetings on our “well-being.” But all this hypocrisy seems to be lost on our City’s civil servants who seem more interested in promoting the cause of outside developers above those to whom they should be both protecting and serving.

Ultimately, fiscal, social and environmental sustainability go “hand in hand”. At their core, they are both there to serve the greater good for all citizens. When City leaders, under the guise of environmental shepherds, stray from their stated duty, they need to be held to account for their actions. To do otherwise is to squander our limited means to protect both our environment and our residents. The current “half-baked” planning decisions and their consequences are neither sustainable nor acceptable. To put short-term gain before long term community and environmental needs is not the path to sustainability. This dynamic needs to change if we are to protect our natural and social resources. There is too much at stake to do otherwise.