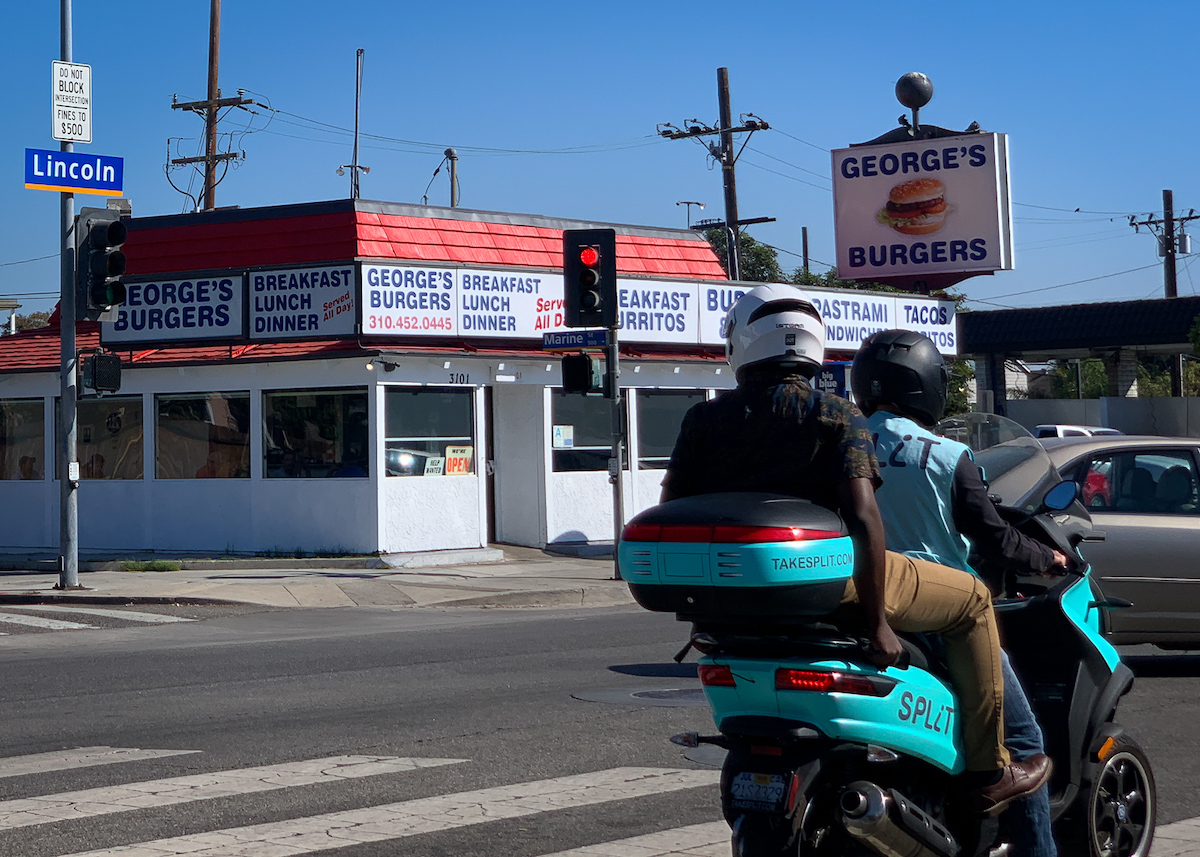 California is the only state to allow motorcyclists to “lane split” and a new company founded in Santa Monica is taking advantage of this by offering a ridesharing service where passengers ride on the back of a three-wheeled motorcycle weaving through LA traffic.

David Masoulf, co-founder of Split Rides LLC, created the service known as “Split” to address the frustration he felt when trying to get to and from Santa Monica from Downtown Los Angeles. “You don’t want to go 10 miles on a Lime bike or scooter. Whenever I get in the back of an Uber, the car always gets stuck in traffic,” Masoulf explained. “And so there really wasn’t a fast way to get around at all. We were basically asking the question, ‘how do we get a fast way to get across town that’s also safe and affordable?’”

According to Masoulf, safety is one of the top priorities when hiring drivers. “We have better drivers than Lyft or Uber, and a lot of that comes down to how you actually choose the drivers,” Masoulf explained. “First of all, all the drivers are over 25 years old. Even though the vehicles themselves don’t require a motorcycle license, we require a motorcycle license. They have to an in-person interview.” Masoulf added that drivers must have clean records, with no accidents within the last five years or DUI’s.

“On top of that, they have to complete a driving test,” Masoulf continued. “We have to see how they actually handle the vehicles. There’s a lot of things we’re doing with vetting the drivers, to make sure these are the best of the best drivers out there.”

Passengers who take Split are provided with a helmet. There’s also about a foot of space between the passenger and driver and two backrests. Even though many riders have never ridden a motorcycle or scooter before, according to Masoulf, they feel safe with Split. “One of the things we see coming up time and time again is about 95 percent of the passengers have never ridden on a motorcycle or scooter ever,” Masoulf explained. “They love the fact that the drivers are safe and confident. And I think that’s why people have been coming back for the service.”

According to a waiver riders agree upon before requesting their first trip with Split, users are made aware that “riding on a motorcycle is an inherently dangerous activity and involves risks that may cause serious injury and in some cases death.”

“I am aware that a motorcycle lacks many safety features that are otherwise present in automobiles,” the agreement reads. “Riding a motorcycle may cause the rider to fall or be jolted, resulting in serious injury or death. I further acknowledge that the roads may include, natural hazards and man-made hazards such as cracks, curbs, potholes, and the like – all of which may cause me, the rider or the driver to experience injury or death.”

The agreement, which also makes riders financially responsible for any medical services required in the event of a crash, has users promise not to sue Split for using their services.

Individuals must be over the age of 18 to use Split and riders combined with their cargo, stowed in a rear box, cannot exceed 200 pounds. In addition, individuals with a history of epileptic seizures and heart conditions cannot take a split. Riders are also barred from using phones while on a Split while riding under the influence of alcohol or drugs is prohibited as well.

A few months after officially launching Split, Masoulf says he wants to change the way Angelenos get around town. “Going back to the where this all started, it’s really about reducing congestion in the city,” Masoulf continued. “I love Los Angeles. If I have to drive to Santa Monica from Downtown, or I have to go to Culver City, there’s a lot of times where I almost don’t want to go. The thing that gets me excited is when passengers say they change their habits now with where they go. We had a girl who goes to a yoga class three or four times a week and said, ‘I would not normally go to this class, but this allows me to get there every time on time.’ And so that’s what’s really exciting, actually seeing people being able to reduce congestion and not have it impact their lives.”

While still under the radar, Masaoulf added that they’ve had enough return riders to realize that Split could grow to become a more popular option for commuters. “At the end of the day, there’s really kind of an alternative to us all driving cars here in Los Angeles, and I think this is hope for that alternative. People keep coming back to use the service, and that tells us that there’s definitely something here.”