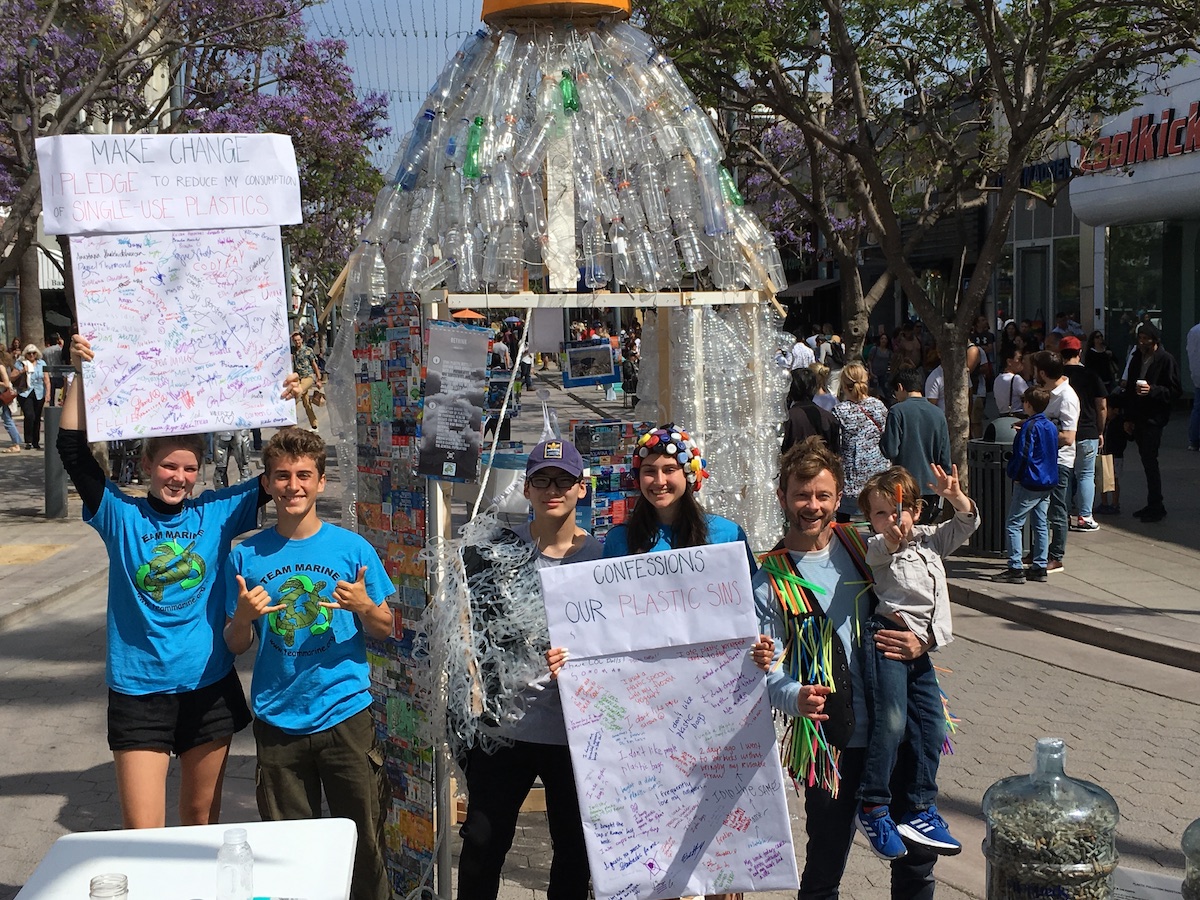 “Our team learned so many critical skills and lessons during this year-long project and we are so excited to continue and broaden our activism efforts. We look forward to working with new and existing partners in the future,” Anastasia Shakhidzhanova, co-captain of Team Marine, said. “We are so grateful to Bow Seat for their ongoing support of youth and the plastic-free movement. Their programs consistently bring light to the plastic pollution problem, an environmental issue that is often overlooked.”

“So stoked for this crew of eco-warriors. It’s another youth win for ecosystems and the planet. Now, for the adults to join the movement” Team Marine advisor and Samohi science teacher Benjamin Kay said.

“This project taught me that creativity is the best way to get individuals to rethink their habits and become guardians of our planet,” Isabel Homberg Reissmeier, co-captain of Team Marine, said.

Team Marine launched their project in response to the copious amount of single-use plastics they found in their local storm drain that empties into the Santa Monica Bay, recognizing that the solution must come from both individuals and governing bodies. However, plastic pollution and climate crises continue and Team Marine urges governments to continue adopting progressive environmental legislation.

During the 2017-2018 school year, Team Marine conducted a large-scale waste audit of Samohi’s campus highlighting the percentage of waste that could be diverted from landfills, finding that 90 percent of their school’s waste could be composted or recycled.

The following school year, the group used the data they collected to present to over 800 9th-graders at Samohi about the importance of sorting their waste properly, the environmental issue of plastic pollution and the larger issue of climate change, offering ways the students could decrease their own personal plastic consumption and carbon footprint.
Further, Team Marine presented their audit to Santa Monica Malibu Unified School District Board (SMMUSD) and lobbied them to pass a sustainability plan that frames sustainability as a priority for the district. The plan was successfully passed in the spring of 2019, and ensures SMMUSD will make continuous and substantial progress in all areas of sustainability, including implementing environmental education into classrooms, educating the next generation of environmental stewards.

“We just want people to know that the small changes in their daily lives make a world of difference in the big picture, Ansel Garcia-Langley, co-captain of Team Marine, said.

As the culmination of their year-long endeavor, Team Marine engaged with their greater community in an installation of their Giant Plastic Bottle sculpture, an interactive 11-foot structure composed of over 600 plastic bottles on the Third Street Promenade in Santa Monica on June 16. Hundreds of people stopped by to discuss the issues behind single-use plastics and solutions individuals could take. At the event, the group gathered signatures for environmental legislation including AB #1080, SB #54 and SB #424, offered an opportunity for individuals to confess their “plastic sins,” a form of engagement modeled after the phrase “there is no recovery without confession” and pledge to be single-use plastic-free. To the team’s disappointment, the aforementioned bills have not been passed yet, but the team will continue to advocate for them.

“Although we recognize the great progress Santa Monica and Los Angeles is making, there is always more to be done; we will continue pushing for more sweeping green legislation, educating the public, and bringing light to critical environmental issues.”

“Although we recognize the great progress Santa Monica and Los Angeles is making, there is always more to be done; we will continue pushing for more sweeping green legislation, educating the public, and bringing light to critical environmental issues,” Shakhidzhanova said. “We hope our work inspires other youth to take action whether that be within their own lives or in wider activism campaigns. We want everyone to know how big of a difference they can make, and to never underestimate their power and potential.”

Team Marine plans to donate 14 percent of their prize to their non-profit partners including Algalita Marine Research and Education Foundation, Surfrider Foundation, Plastic Pollution Coalition, Heal the Bay, 5 Gyres, Climate Action Santa Monica and the Story of Stuff. In addition, they will use a portion of the funds to expand lobby and outreach efforts.