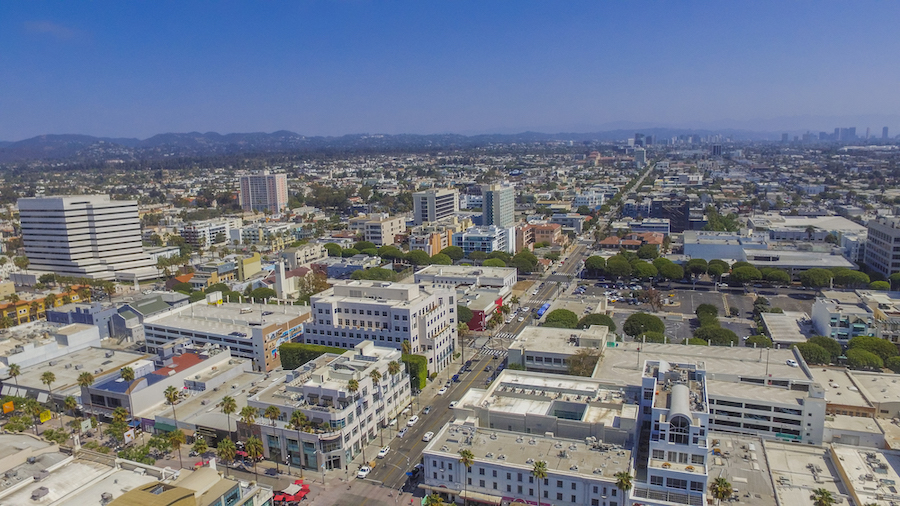 [Please note: Ron Goldman’s article from last week has a Part 2, which will be published next week]

For several years, SMa.r.t. (Santa Monica Architects for a Responsible Tomorrow ) has been promoting the notable advantages of a low-rise city composed primarily of buildings no higher than 4 stories. In this article from exactly four years ago, our colleague Mario Fonda-Bonardi explained in detail the benefits of a low-rise city, and the quality of life issues that arise with taller buildings. With the new state requirements for massive increases in the City’s number of apartments, this information becomes more relevant than ever.

As the noted architect Christopher Alexander said in his book A Pattern Language:

“At three or four stories, one can still walk comfortably down to the street, and from a window you can still feel part of the street scene: you can see details in the street, the people, their faces, foliage, shops. From three stories you can yell out, and catch the attention of someone below. Above four stories these connections break down. The visual detail is lost; people speak of the scene below as if it were a game, from which they are completely detached. The connection to the ground and to the fabric of the town becomes tenuous; the building becomes a world of its own: with its own elevators and cafeterias.”

Why a low rise city?

The most important benefit is sustainability. Among the advantages of low-rise buildings are: 1) their superior ecological sustainability in its many forms 2) their resiliency when cut off from power, 3) their minimal impact on adjacent streets, and 4) their increased access to views, sunlight and natural ventilation. They also provide increased access to sunlight to neighboring properties with solar panels.

One of the most obvious advantages is that low-rise buildings are cheaper and faster to build than their taller counterparts, primarily because the material costs are much less. The lower cost of construction translates to shorter construction time as well as less disruption to the neighborhood during construction.

Another advantage of lower buildings is that their occupants are able to closely monitor the street and hence exert more “territoriality “on the neighborhood. This makes the streets safer because since more eyes on the street discourage crime. It has been shown that occupants living above 6 stories typically have little idea what’s happening at the street level and therefore do not feel as protective of “their street”. Another advantage, in the event of fire, is that it’s easier to escape or be rescued from a low-rise building than one that is taller. Obviously, lower building’s roof decks and yards have more privacy when they are not dominated by adjacent high rises.

“…the most important reason to build and maintain our low-rise buildings is that they preserve the City’s character, desirability and hence, our land values as well. Santa Monica residents like their small beach town ambiance, and would like to keep it that way.”

Preservation of existing streetscapes and businesses give a sense of place to a city. When new codes allow heights substantially above the existing urban fabric, it becomes a death sentence for the existing buildings and businesses since the potential profit of taller construction becomes too tempting for developers to resist. Often when they are rebuilt, the prior businesses and tenants cannot afford the higher rents of the new, more expensive replacement buildings. The result is that they are forced to vacate, further reducing the stability of the neighborhood. Needless to say, this process dooms many historical buildings that might have been excellent candidates for adaptive reuse. It also degrades the livability and ambiance of the existing neighborhoods.

Finally, low-rise buildings are more survivable (resilient) in the event of a catastrophic earthquake when the City will be limping along at reduced water and power availability. This is particularly true if the quake occurs on the San Andreas fault that separates the City from its far-flung energy and water sources.

In the final analysis, low-rise buildings consistently out-perform mid- and high-rise buildings in terms of their cost, safety and livability. Thus, they are better for both residents and the city as a whole. Their short term drawback is that they are often less profitable for developers. Ultimately, however, the most important reason to build and maintain our low-rise buildings is that they preserve the City’s character, desirability and hence, our land values as well. Santa Monica residents like their small beach town ambiance, and would like to keep it that way.