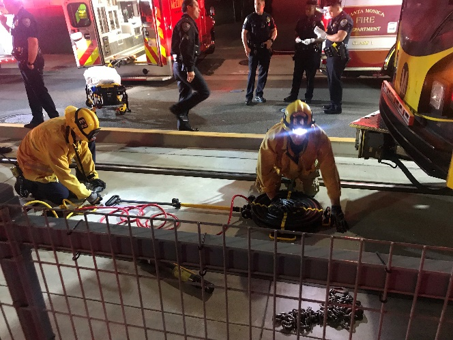 The Los Angeles County coroner has determined that a homeless man fatally hit by an Expo Line train last weekend died by suicide.

On Sunday, January 26, 2020, at approximately 6 a.m., a collision involving a pedestrian – 57-year-old Derrel Burnett Jr. and a Metro light rail train occurred at the intersection of Lincoln Boulevard and Colorado Avenue. The Santa Monica Police Department (SMPD) says it believes Burnett was homeless.

“Upon arrival fire resources found one person trapped under the wheels of the front section of a three-car train. The incident was in the 700 Block of Colorado. The patient was evaluated, and it was determined he was breathing and had a pulse but had sustained serious life-threatening injuries,” said SMFD Captain and PIO Eric Himmler.

According to Himmler, SMFD paramedics began immediate Advanced Life Support while Department Truck 1 and Urban Search and Rescue 2 immediately set up equipment to lift the train to free the patient. The patient was extricated from the train at 06:38 a.m. and transportation began at 6:42 a.m.

“Working around and lifting a train is a complex and dangerous operation. Members accomplished the task safely and quickly delivering the patient to the trauma center in less than an hour after dispatch. Unfortunately, the patient succumbed to his injuries at the hospital,” Himmler said.

According to the Santa Monica Police Department, there were approximately 10 passengers on the train at the time of the collision. No other injuries were reported. The name of the deceased has not been released until next of kin has been notified.

This marks the third fatality involving Expo Line trains in Santa Monica. In November 2017 a pedestrian was hit by the side of a train near Colorado Avenue and 14th Street and in January 2019 a pedestrian was dragged by the 17th Street Station by a departing train.

The fatal collision also marks the ninth death by suicide to occur in public places since February 2018. Three of these deaths have occurred at the Santa Monica Pier and four individuals have jumped from parking structures. The other death occurred when a parent shot himself in front of John Adams Middle School.