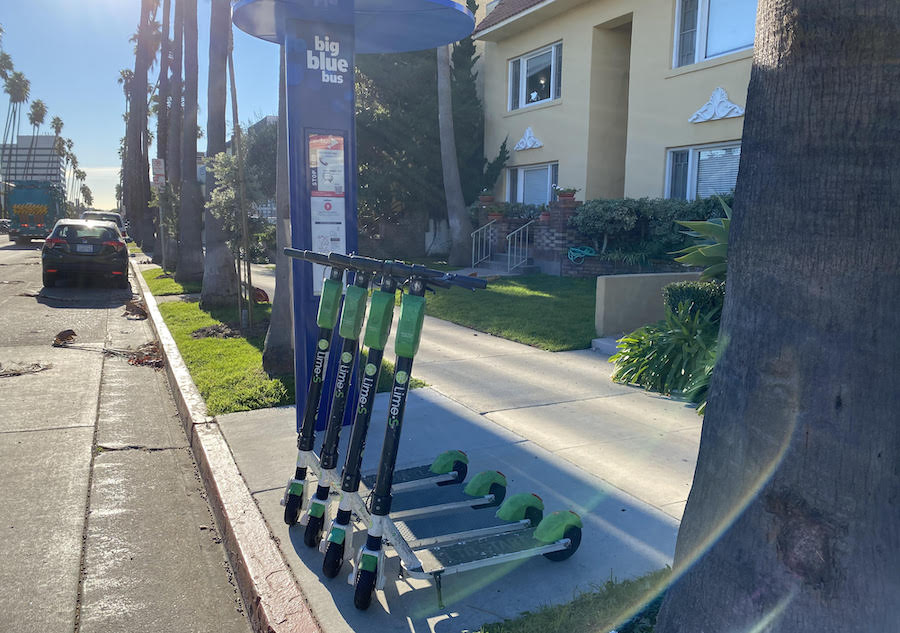 When an elderly lady tripped over a scooter lying on the sidewalk a year ago and fractured her hip and elbow, a perfect storm of inadequate City enforcement and dubious corporate behavior in Santa Monica became visible and transparent.

The lady’s daughter had dropped her off in front of Emeritus College on Second Street. Stepping onto the curb, the woman tripped over a scooter and fell to the pavement.  She suffered multiple fractures in her hip and elbow, and underwent complicated and difficult surgery. The scooter had been left in the middle of the sidewalk illegally, in a zone designated as a no-dropoff area for scooters. The penalty for this violation, if it existed at all, proved ineffective as a deterrent both to the user and to the scooter company. The elderly lady’s life-course is now irreversibly altered.

Scooter-related violations continue with depressing regularity. A quick walk around the downtown area, the streets near the community college and other places reveals large numbers of scooters and electric shared bicycles, abandoned in the middle of sidewalks, obstructing curbside handicapped ramps, walkways and driveways throughout the city. And it’s not just scooter users: freelance scooter-charging operators, hired by mobility companies to retrieve the vehicles, charge their batteries and distribute them in the mornings, often park the scooters within bus stops, obstructing passengers trying to board or disembark buses.

The impact of these violations on pedestrians reads like a trauma center case-study handbook. A 67-year-old man, recovering from neck surgery, trips on a scooter on Main Street and puts his prior surgery recovery in danger.  A 72-year-old woman exiting a coffee shop on Main Street maneuvers around three electric scooters parked outside the entrance, trips and falls, and is hospitalized with multiple injuries. A 57-year-old woman, walking down 17th Street with a group of people, trips over a scooter lying across the sidewalk and breaks her foot. A colleague’s neighbor, around 80 years old, trips over a scooter while walking to church. Her severe injuries make it impossible for her to continue living alone. She is forced to abandon her home and neighborhood of 40 years and moves to an assisted-living facility in another city.

It seems incredible that such violations continue to victimize pedestrians, more than a year after a staff report unequivocally showed that impounding scooters and fining companies can dramatically reduce the number of violations. Why isn’t the City doing more to protect pedestrians from becoming victims of these vehicles and their users? Why does the City allow scooter companies to park their vehicles along streets, such as Lincoln Boulevard, where higher speed limits make scooter use illegal, thus almost inviting riders to break the law? Why does the City allow scooter users to ride across crosswalks? Doing so is not only illegal, it puts pedestrians in even greater danger, and yet a brief visit downtown shows frequent and widespread use of the crosswalks by scooter riders, especially during holidays when the area is densely populated by pedestrians.

In a recent City Council meeting to discuss extending the 18-month scooter “pilot project”, Council members expressed anxiety about the financial viability of the scooter companies.  Shouldn’t the priority be pedestrians? Where actual pedestrians are concerned, the often-touted idea of a “walkable city” seems to have disappeared. Even in the most recent staff report, the “Shared Mobility Pilot Program Summary Report” from November, the main references to pedestrians discussed collisions between scooters and pedestrians, not the actual dangers to pedestrians posed by improperly parked and discarded vehicles.

The city also shuts its eyes to other hazards and costs of these vehicles. It is strange that in this “environment-first” city there is no law, for example, that requires scooter companies to recycle batteries. There is no tracking of vehicles that have been removed from service (often after only two to four months) to understand their fate. There is no tracking of carbon emissions by internal combustion vans and trucks used to pick up and deliver scooters. There is no data showing a reduction in car trips coinciding with arrival of masses of scooters. The true environmental benefits of scooter use, touted by scooter companies worldwide, have been seriously challenged by numerous investigations, but our city displays no interest in these studies, and instead promotes the use of scooters in its efforts to eliminate parking structures and publicize its environmental leadership.

In the effort to promote scooters as a way of eliminating cars, the city has relied on user data reported by users themselves, a dubious and unreliable source of information on which to base city policy. In a recent City Council meeting, the then-mayor used that questionable data to tout the program’s impact on reducing car use in the city. How many car trips were replaced by scooter rides in the first 18 months? Millions, she said. Millions of car trips. How do we know this? Well, users said so. Any hard evidence? None presented, only the self-reported surveys.

Other cities have done a lot more to make sidewalks safe for pedestrians. Phoenix, for example, requires companies to use so-called geofencing technology to prevent riders from ending a session outside of designated parking zones. Riders parking outside those zones continue to get charged by the minute until they move the vehicle to an approved spot. If a scooter is reported parked outside a parking zone, the company is forced to relocate the scooter or get fined. Sacramento assigns parking enforcement officers to take photos of scooters that block sidewalks. They use handheld devices used for cars, now modified for scooters and e-bikes, to record the time and locations of the violations. Tel-Aviv just introduced a new law that, among other things, reduces e-scooter speeds to safer and more manageable levels. All of these things can, and should be done in our city as well.

It is time for city leaders to step up, acknowledge the real hazards created by shared e-scooters to pedestrians in this community–a group that includes the most vulnerable populations we have–and take effective measures to end the problem. If we don’t do it, victims’ lawyers will. Already there are two important lawsuits against the city–the elderly lady mentioned at the top of this article, and a woman suffering from paraplegia who works in Santa Monica, and has her access to her job continually blocked by mis-located scooters.

Other cities have addressed this problem effectively. We can, and should, follow their lead without delay.