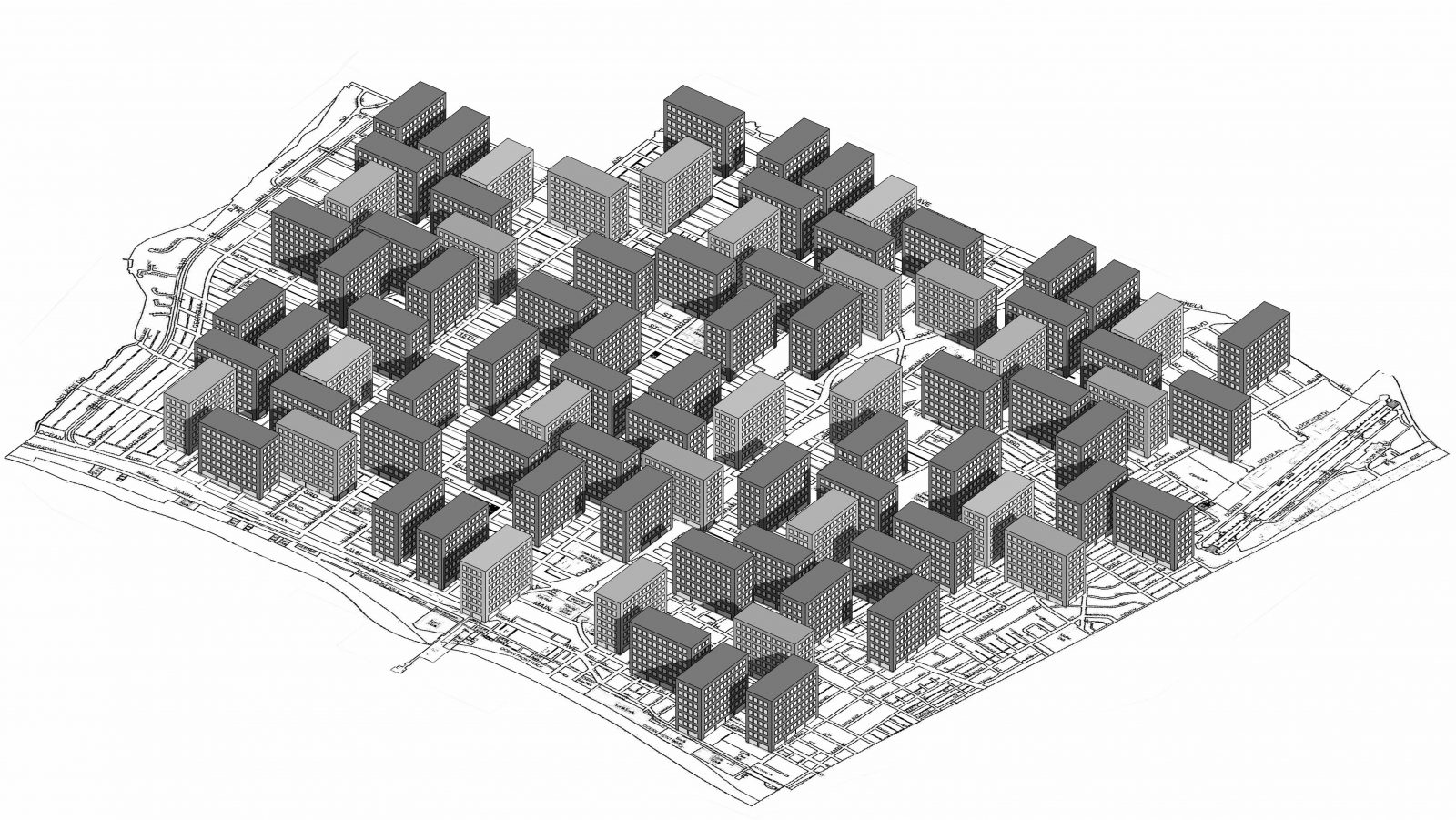 As many of our readers know, our city is now under siege from the State of California which has arbitrarily decided that we need to build 8800 new housing units in the next 8 years (a 20% population increase). Furthermore, 2/3 of these mirage units need to be affordable units under pain of severe State funding withdrawal penalties if your city fails to make “good” progress toward this goal.

What would such a construction binge look like? According to the City Planning Department’s own estimate, because many smaller residential buildings would need to be demolished to make room for these new behemoths, we would need to build 10-15% more replacement units to reach their 8800 new unit goal. In other words we actually need to build about 10,000 new units. This means 100 new 100 unit buildings or about 12 such skyscrapers in each of the city’s 8.4 square miles (see attached drawing).

But certainly this would not impact the single-family districts you say? Actually, they too are under siege by another different Sacramento threat, Senator Weiner’s zombie bill SB50, which in its evolving formulations wants mandatory 6-8 story buildings everywhere in our City within certain distances to transit stops. His evolving distances have not yet been finalized, but his bill means they could be built anywhere in the City except north of San Vicente or south of Ashland. This zombie bill keeps getting rejected but keeps coming back because Weiner, having taken over $500,000 of real estate industry money, still needs to deliver to his handlers.

When your city has been producing at great cost, mobility and ecological expense about 112 units a year from 2015 to 2018 (30/year were affordable); everyone who is not a member of the real estate speculation industry understands immediately that this ten times larger State-imposed quota, combined with SB50 and its cousins, is a dangerous fools errand.

In reality the state quota and bills like SB50 are not intended to produce affordable housing but to make money for real estate speculators. The only thing that really builds affordable housing is some form of earmarked subsidy for that housing.

Everyone it seems, understands this, except our City Council that when Sacramento says “jump” they say “how high?” Their first move in preparation for this invasion is to double your water rates in five years. So while inflation has gone up about 22% in the last 10 years, and greedy landlords have pushed up rents 66% in that same time period, your City wants to raise the cost of this essential service by 100% in half the time!

Their second move in preparation for the invasion is to entertain the Planning Department’s spending $800,000 ($300,000 consultant plus $500,000 EIR) to upzone the entire City to welcome the invaders. Our cities’ current zoning already has enough capacity for 10,000 units
should we chose to blindly go in that direction. Just in the single-family districts, we have capacity for 6000 units of accessory dwelling units. In other words we do not need to obediently rezone the entire City. Again we need to actually build affordable housing and not to waste public dollars on paper exercises. That $800,000 is enough for one to two affordable units for some lucky low-income family.

Analogously the State is wastefully offering California cities $200 million to upzone all their zoning codes. That money should also be better spend on actually building 270-800 affordable units (unit costs vary depending on location).

The City Council’s third move in preparation for the invasion, after deciding that public input on big projects is a hindrance, is to ask the Planning Commission to remove public hearings from the approval process. This of course is a carefully disguised fig leaf of supposedly “streamlining” the approval process which only confirms citizen’s accurate perception that the City does not listen to its residents. No wonder the citizens are both angry and cynical. So essentially, as the City Council opens the City gates to the barbarians, it then tells its residents to shut up and not only to accept the destruction of their City’s character but to help pay for it. The residents understand that nimble well funded market-rate developers will exploit all these Council moves faster than the patchwork under-funded subsidized affordable housing providers.

So how can the City Council, restore its credibility? The first step is to publicly appeal the State’s housing quota number and take a public position along with all other likeminded Cities that this is an illegal unattainable unfunded mandate. Certainly the City’s 25 odd clever attorneys can find at least a half dozen reasons for the appeal.

This public announcement would do four things. First it would signal to the residents that their City is serious in protecting its interests by not wasting any time, money or political capital on chasing the unattainable. The citizens need to know unequivocally that their City council is not secretly buying into Sacramento’s madness. Second it preserves the power of local control. Third any city that does not appeal its quota will have to take the left over units from other cities that are successful in their appeals. In other words, failure to appeal, is a form of suicide: all cities need to appeal out of self defense. Finally having firmly rejected the State’s overreach, we can then ask the only question that really matters: how much money will the State give us for affordable housing?

If their answer is the State wants to give us all the $3 billion needed for the 6000 affordable units, we can then discuss with them the other constraints to growth (solar access for net-zero buildings, water availability, lot availability, no new net PM trips, fire, police, etc. etc.) to arrive at a credible number. If their answer is no State money is available, we will need to continue self-financing our new affordable housing. We are already doing that well with the 1/2 percent sales tax premium our residents pay and the required fees and affordable units we add to the cost of market rate housing. We may find other local ways to increase affordable housing production but that should not be under State control or coercion.

But before we discuss the feasible, we need to get the delusional State quota out of our way by just saying NO. Santa Monica, that has a credible affordable housing program, should be truthful to its residents and itself as to how it will realistically add to its affordable housing. It can start by speaking truth to power: the City Council, as the only party that has standing to appeal, has two months to appeal the State’s insane quota. The clock is ticking……