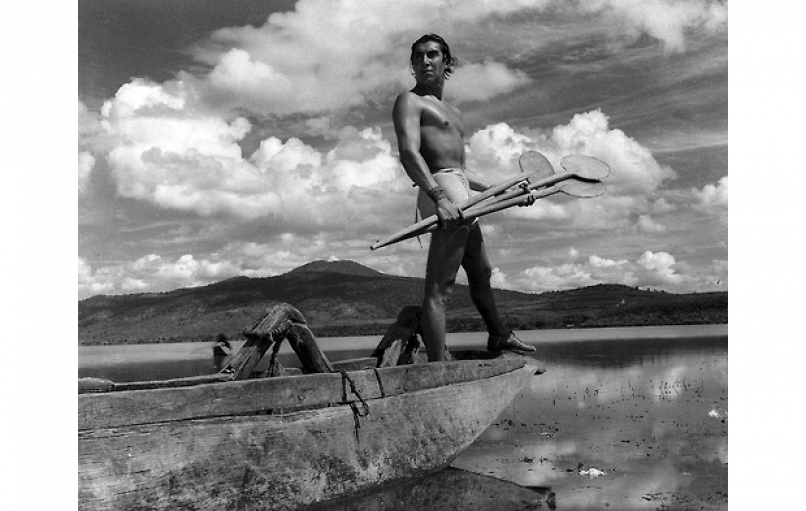 On May 16, 1929, the Academy of Motion Picture Arts and Sciences, an organization founded by Louis B. Mayer to further the advancement and improvement of the budding film industry, held a dinner party in the Blossom Room of Hollywood’s famous Roosevelt Hotel. This was a celebration to honor work done by the members of this Academy. The very first Academy Awards were actually announced before the ceremony.

Sound had just been introduced as a bright new technological development, so the only film with sound that year, The Jazz Singer, was not allowed to compete in the Best Picture category. The winner of Best Picture was the silent black & white film Wings by director William Wellman. Wings is as beautiful a film to watch today as it was 91 years ago.

Legend has it that the model for the legendary Oscar statue was Mexican actor/director/writer Emilio Fernandez (pictured here) whose film career began in 1928 and lasted almost 60 years. The Academy was inclusive then!

“Cut to 2020.” The Academy Awards is now an international juggernaut that can make or break the box office viability of a film. Though it’s de rigeur to complain that the show itself is more boring each year, almost everyone with an interest in the movie industry watches it. The Oscars can slight superb movies that don’t receive nominations. On the positive side, the show brings attention to worthy films and the artists who make them.

Did I say artists? Yes, and in my book, it is ridiculous to have a contest or award prizes for art. A good percentage of the value and beauty of a work of art depends upon what the beholder brings to the piece. Should we award a prize then for Best Audience Member?

I prefer to think that an Academy Award serves as an acknowledgement of excellence, rather than a prize for winning a game. The event brings public attention to the fine work of the colleagues of the Academy members, currently an elite group and certainly not all-inclusive. Hopefully that will change. However each year I regret that certain films that I deem exceptional, that will stand the test of time, are unrecognized with Oscar nominations.

Movies I have seen in 2019 that are on my personal Academy Awards list and have zero actual nominations are The Mustang, Booksmart, The Art of Racing in the Rain, The Current War: Director’s Cut, Queen & Slim and Just Mercy. These unequivocally deserve my “Why Was This Not Nominated” Award.

Some of the finest films of 2019 were nominated but not for Best Picture. Film students for years to come will watch them for their artistry. These are A Beautiful Day in the Neighborhood, Knives Out, The Two Popes, Judy, and Harriet.

The films nominated for Best Picture all deserve that honor, Once Upon a Time in Hollywood, Ford v Ferrari, 1917, Parasite, Joker, JoJo Rabbit, The Irishman, Little Women and Marriage Story.

My own Best Picture list includes Harriet, JoJo Rabbit, 1917, Ford v Ferrari, Parasite and Just Mercy, a wide range of style and genre. All of these films are awesome pieces of cinematic literature. What makes a film extraordinary is the inspiration it brings. My winner is Just Mercy, with Harriet and Won’t You Be My Neighbor a close second, because…truly inspired!

Kathryn Whitney Boole has spent most of her life in the entertainment industry, which has been the backdrop for remarkable adventures with extraordinary people. She is a Talent Manager with Studio Talent Group in Santa Monica. kboole@gmail.con