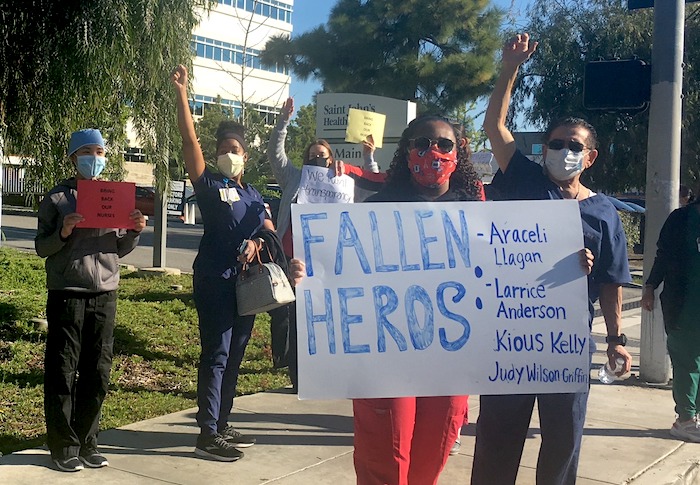 No new cases of COVID-19 were reported in Santa Monica Monday but as county officials announce the death of three healthcare workers due to the virus, local nurses are demanding personal protective equipment.

As of Tuesday, 2,517 people who tested positive for COVID-19 (25 percent of positive cases) have been hospitalized at some point during their illness.

On Monday, Public Health confirmed three people that died from COVID-19 worked in a healthcare setting. In addition, the county says that 787 confirmed cases of COVID-19 have occurred among healthcare workers.

As of Monday, healthcare workers who are have tested positive worked at 22 different settings across the County. While details about specific health care centers were not made available by the county, over the past week nurses picketed in front of both Providence St. John’s Health Center and UCLA Medical Center in Santa Monica demanding personal protective equipment (PPE).

According to Bonnie Castillo, Executive Director of National Nurses United and of the California Nurses Association, three nurses at Providence St. John’s Health Center in Santa Monica were told to enter patient rooms in the COVID-19 unit without N95 respirators. In a tweet, Castillo said that they were instructed to do so “even though there are plenty of respirators available. Even though physicians had advised them to only enter with the proper protection.”

The nurses were suspended for these actions, according to Castillo.

On Friday, over 50 union nurses showed to picket at St. John’s to demand PPE for nurses, the return of suspended nurses without discipline, transparency in PPE supply, N95s for all COVID-19 patients and paid leave for RNs who test positive for COVID-19.

Due to the mounting pressure from these nurses, St. John’s announced that the three nurses would return to work without discipline.

On Saturday, however, Castillo says the St. John’s suspended four additional nurses who asked for the appropriate PPE before caring for patients in the COVID-19 unit.

In addition, a petition circulating calls on St. John’s to provide frontline workers that need to isolate from their own families between shifts hotel rooms.

“Providence Saint John’s has been working to provide showers and changing stations for folks coming off their shift, and that is appreciated, but our healthcare workers should have access to lodging between shifts to mitigate the risk of spread to families and other high risk loved ones who aren’t able to properly isolate when they get home to a small apartment or home. We see hotels being offered as an option for workers at hospitals around LA County including USC, UCLA, and others, but haven’t seen it for Saint John’s workers,” wrote petition organizer Adam Smith, a Pre-Op/ICU nurse at Saint John’s. “While it would be incredibly difficult on our family, I would feel safer if between shifts of treating COVID19 patients, my wife had an option to stay somewhere else and not have to worry about bringing the virus home with her 3-4 times a week.”

The Santa Monica Mirror has reached out to St. John’s for comment but at the time of publishing have not received a response.

On Monday, union nurses picketed in front of UCLA Medical Center in Santa Monica calling on UCLA Health to provide PPE for all healthcare workers there.

In a statement, UCLA Health told the Mirror that “Recognizing that the virus is transmitted through droplets generated by coughs and sneezes and contact with contaminated surfaces, our current guidelines call for staff to wear surgical face masks and eye protection when caring for all patients who may have COVID-19 Experts recommend reserving more stringent airborne precautions such as N95 masks and associated PPE for procedures that result in aerosolization of the virus – such as intubation – when caregivers are closer than six feet from the patient. These guidelines are aligned with the recommendations of World Health Organization and the U.S. Centers for Disease Control and Prevention.”

According to UCLA Health, the hospital is evaluating masking practices in consultation with the University of California’s academic health systems and experts at the Los Angeles County Department of Public Health.

“UCLA Heath’s priority, at all times, is the safety of patients, nurses, physicians, and other staff,” UCLA Health said. “We are grateful for the dedication, courage and resilience of our nurses under such extraordinary circumstances.”