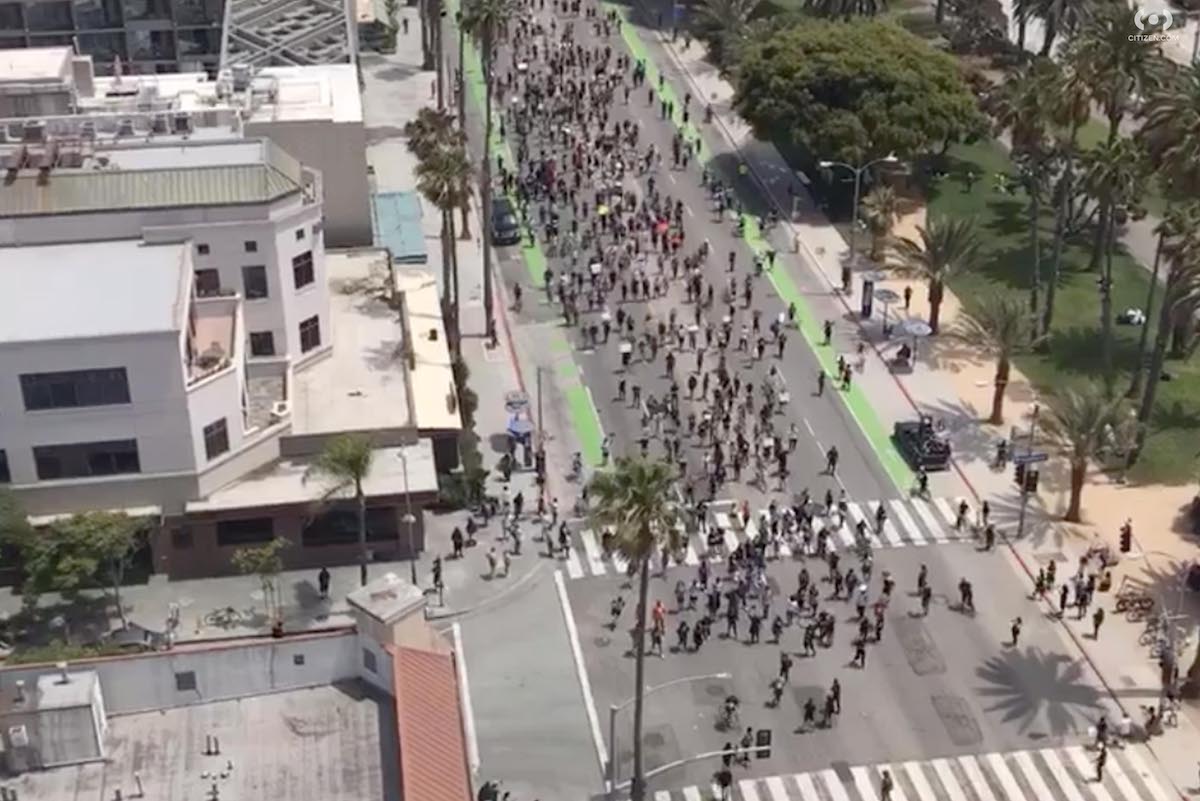 Update: 9:45 p.m. – in a 9:27 p.m press release, the City of Santa Monica announced that the United States National Guard is on the ground.

The Santa Monica Fire Department said that there have been four structure fires, four car fires and one dumpster fire, as of 9:46 p.m. No active fires are burning at the time of publishing.

No Santa Monica police officers have been injured as of 9:27 p.m., according to the City.

Update 7:12 p.m. – at a 7 p.m. press conference, Mayor Pro Tempore Terry O’Day said “we understand that this peaceful protest was not part of the looting.”

In addition, SMPD Chief Cynthia Renaud said at the press conference that “We are making arrests as we speak.”

The Third Street Promenade and downtown Santa Monica are currently being looted as police have deployed rubber bullets and smoke bombs while the National Guard has arrived.

At 1:51 p.m. the Santa Monica Police Department (SMPD) tweeted that the public should avoid the downtown and Civic Center area due to the looting that had begun in the area.

At noon a peaceful protest against the police killing of George Floyd began at Montana Avenue and Ocean Avenue. Protestors marched down Ocean Avenue to the Santa Monica Pier.

Reports say that a Vans, Gap, Nike, REI and Vons stores are among businesses targeted by looters.

According NBC 4, a fire has broken out inside REI.

According to ABC 7, one group of looters escaped in a Mercedes Benz getaway car with Florida plates.

The City of Santa Monica has extended a curfew that will be in place from 4 p.m. Sunday to 5:30 a.m. Monday.

Los Angeles County has also announced that a countywide curfew will go into effect at 6 p.m.

According to the SMPD, all I-10 and PCH off-ramps into Santa Monica are now closed by the California Highway Patrol.

According to Fox 11, the National Guard has arrived in Santa Monica around 4 p.m.

Police have deployed tear gas, smoke bombs and non-lethal bullets at protestors who are throwing objects, including rocks and M-80 firecrackers, at police.

Around 4 p.m. shots were reportedly fired from a vehicle at police at Lincoln Boulevard and Ocean Grant Street. According to the reports, no officers were injured and a suspect is in custody, though one officer was shot in the foot. Two other suspects may remain.

A building on the corner of Santa Monica Boulevard and 4th Street caught fire a little before 5 p.m.

Around 5:15 p.m. a car was shown up in flames around the Santa Monica Civic Center.

At 5:30 p.m., SMPD Chief Cynthia Renaud announced that the Department will begin making arrests for people violating the curfew.