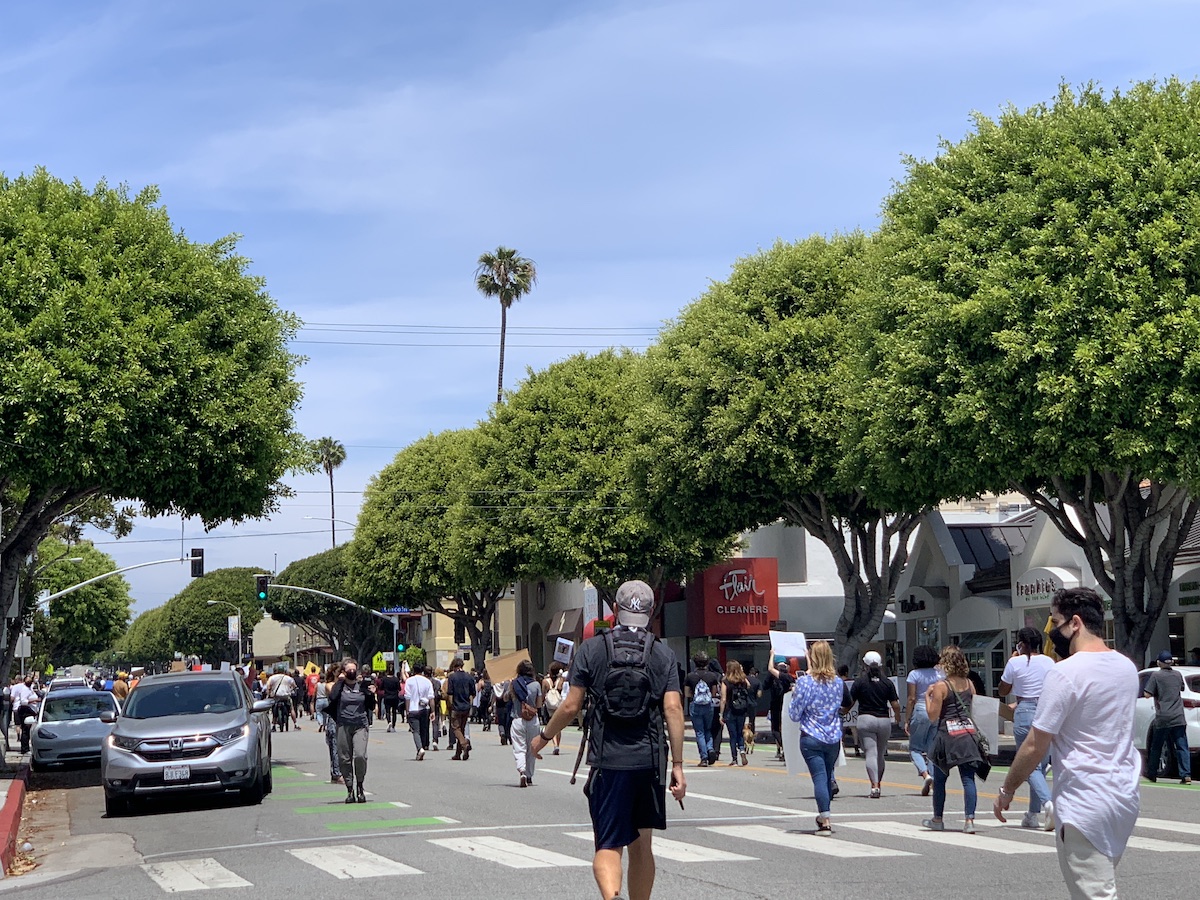 My 16-year-old daughter joined with fellow Santa Monica High School students on Sunday to protest the death of George Floyd in Minneapolis. She and her friends wore black, chanted, walked down Montana street, and listened to speakers. For a brief moment, she felt that they all were part of a larger, constructive movement condemning racism. That is until the pre-rumble to a melee. She saw a young man sporting a gun and another man driving a car that attempted to swerve into the crowd of protesters. She called me to pick her up on Wilshire Boulevard and warned me to lock the car doors as there were “bunches of guys running in groups, breaking windows, and taking things.” As she and her friend made it to the car, they exclaimed that they had seen a man attempt a carjacking of someone sitting at a traffic light.

In a flash, our seaside town of 90,000 people had become a hot-spot for those bent on looting and taking advantage. Their callous selfishness and thirst for chaos manifested by the smashing of windows, the transporting of stuff to waiting cars, and driving off to other locations to start afresh, – – was drowning out the message of peaceful protest. My daughter and her bestie, a student born abroad, were frightened at how quickly peace can get ugly by those who seek personal advantage.

They were shaking when they got to my car – so much so I had to remind them to put on their seatbelts. As we drove back to mid-town, I saw the groups of marauders swarming into the streets disregarding traffic signals. I told my car occupants (captively quiet from shock) that violence has been a thread-line theme throughout American history. I, a constitutional studies instructor and former federal prosecutor explained that even though the sidewalks are covered in glass and spray-painted profanity is on the walls of buildings, this is not 1938 Germany. The street violence is not state-sponsored but it is inbred in who “we the people” are.

Curiously silent, not looking at their phones, with their expressionless faces staring out of the car windows, I kept talking. I explained we have always been a country of violence. Four of our presidents have been assassinated in office: Lincoln (1865), James Garfield (1881), William McKinley (1901), and John F. Kennedy (1963). During the American Revolution, the British, and those thought to be aligned with them, were assaulted, tarred, and feathered – by us. Thomas Jefferson viewed rebellion as America’s secret sauce. In 1787, he wrote that a “little rebellion now and then is a good thing.”

Our “experiment with democracy” was premised on the powder keg of racial division. The founding document, drafted by 55 white men (half of whom owned slaves) enshrined and legitimized the enslavement of humans. It was no oversight; it was intentional. The practice of furthering human bondage was referenced three times in our 1787 Constitution, a document of some 4500 words. This week’s public protests against foot-on-the-neck policing, provide “cover” for the inexcusable destruction by the rabble.

In times of crisis, when fires are burning in our neighborhoods, we cannot ignore that we remain a “house divided.” We need someone “to bind up our wounds” and who understands that communities of color can be set back and demonized, in a flash, by opportunistic incendiary agents.

I long for the likes of Robert F. Kennedy (“RFK”). When Martin Luther King was murdered, John F. Kennedy’s brother, our former Attorney General, RFK, comforted the grieving. He urged them to honor King’s memory through peaceful protest. Robert Kennedy, whose own days were numbered, well understood the legacy of rebellion. What RFK did in that awful April of 1968 showed true leadership: that combination of intellect, compassion, and finesse necessary to successfully balance the right-to-protest and grieve with the rights-of-citizens-to-have-public safety.

I worked at the Justice Department as a federal prosecutor for presidents from Reagan to Obama and never prayed at my job (even when Attorney General John Ashcroft hosted Department of Justice bible study-prayer meetings). But I am praying now. Big time. As I hear the helicopters overhead and we are tucked inside obeying the city and county-wide curfews, I make not a peep. The inner words of prayer for my country are my mantra.

I pray for the police to use good judgment and to be safe; I pray for the protesters that their message is heard, and I chastise those who exploit the freedom-of-protest by devolving into nihilistic looting and destruction. They do not speak for me.

What I pray for most? That my children and my neighbors’ children will see new leadership in this country come November.