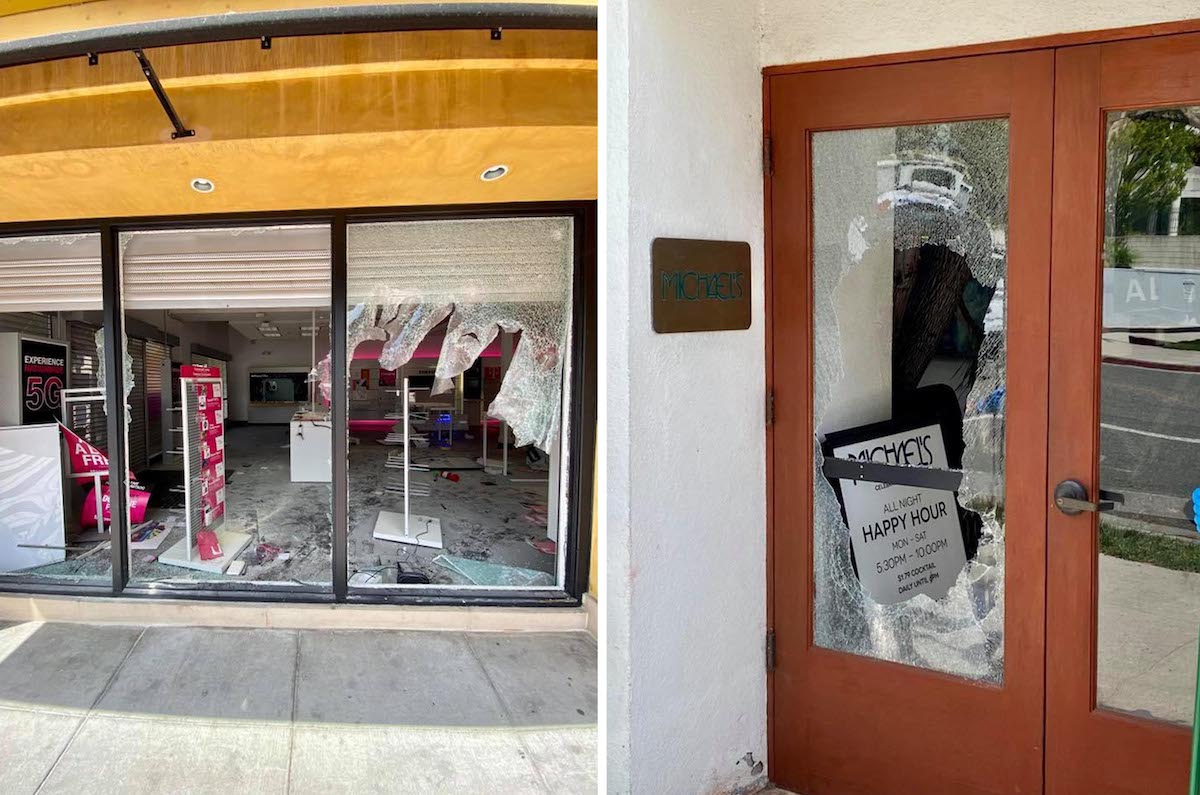 ~ Our looting redux. The angst and anger of our community are still reverberating throughout Santa Monica. Everyone I have communicated with has a strong opinion about the events of Sunday, May 31st. The afternoon of looting was an “all-time low” for our city. The owners of Santa Monica Music Center called 911 seventeen times. The response, “You’re on your own. If you own a registered firearm, you’re welcome to guard your own business.” Residents need to understand how our treasured, independent merchants became part of a free-for-all swap meet downtown. By the way, downtown SM (DTSM) includes Lincoln Blvd. The district and zoning designations were expanded so the city council could let their crony developers build higher and more densely on Lincoln, feasting at the trough of residents. So, when we say looting, we include Lincoln.

~ How utterly shameful to see our Police Chief in press conferences that day describing the situation as under control! The split-screen TV showed restaurants on fire and stores destroyed in our beloved city. Twenty-nine guns and ammunition are missing from Big Five. The fire starters who set the blaze at Sake House are still on the run. The woman who split the skull of an older man at Von’s with a baseball bat is still on the loose. Astounding figures. One Hundred fifty-three shops and restaurants looted. Another 150 damaged. Some won’t reopen. Sunnin Lebanese Cuisine on Santa Monica Blvd is one of those. Many looting victims are upset that no members of the city council have reached out.

~ Our police were guilty of the same senseless brutality that our progressive city council decries in other cities. Protesters on Ocean Avenue were tear-gassed even though many of them were sitting – just sitting. Yes, they were sitting in the middle of Ocean Avenue, but this was a moment of utmost importance in America. The entire nation watched a white policeman murder George Floyd. Black men have felt that same knee on their neck for 401 years— but this time in broad daylight, on video. So, protesters were angry. Our police department, along with officers from mutual aid cities lined up against them. These men and women, young and old, felt that the knee of the police on all their backs, so they didn’t leave. The Santa Monica Police, well-schooled in the art of de-escalation, threw it away, and instead attacked this relatively peaceful group with rubber projectiles and tear gas. This happened a block from that great bastion of progressive power, our city hall. Where were the majority of our elected officials during this fiasco? Why weren’t the combined police departments confronting the looters on Second, Fourth, and Fifth streets?

~ The police accountability for this travesty? Yeah, we will get an independent report sometime in the fall. If it praises the chief, her command team, and the incident commander’s actions, it will go public before November. If the news is negative, who wants to bet the report will be under wraps until after the November elections! By the way, despite the tone of what I have written above, I’m not knocking our police officers. Their ranks are full of great caring men and women. I’ve always been proud of them, and I still am. I support them and know they are dealt an impossible assignment, charged with correcting the world’s ills when police are just supposed to keep us safe. I know that they are anguished, heartsick, and angry, as we all are, about the results of Sunday, May 31st.

~ After the participation of hundreds of thousands in protests throughout our nation, the cry to “defund” police departments is omnipresent. In most cases, you can interpret that as shifting financial resources back to social service and youth support programs. It’s time to re-examine the function of our police department and what its specific focus should be.

~ Our police chief, city council, and city administrators let us down. To use football as an analogy, you saw no plan, no strategy, no ability to adapt or adjust during the incident. Our city leaders were outplayed by a group of looters from all over LA, drawn by social media posts of a “party in downtown Santa Monica.” Pathetic! Maybe our chief should check her Twitter feed more often. Quoted in the Santa Monica Lookout, a senior retired SMPD official stated, “We thought we were going to a ballet, and it turned out to be a hard rock concert.”

~ City council members attempted to identify and treat some of the causes of long term institutional racism Tuesday evening. The Obama and 8 Can’t-Wait policies were both adopted. Both address the SMPD use-of-force policies and call for needed reforms within the police department. Council members went further and voted to institute a Black Agenda with the help of our city’s residents of color. An excellent first step – reverse the flight of our city’s black residents to other communities. What does the black community in Santa Monica want and need to thrive? There are over 200 black-owned restaurants in Los Angeles County, zero in Santa Monica.

~ Strong communities make the immense power of the police and politicians obsolete. When will the residents take control of our city?

~ Restauranteurs are angry with the high cost of running a restaurant in our town. The margins are already razor-thin, and with the COVID-19 shutdown and looting, they can’t even break even. The proprietor of Heroic Italian (fantastic food!) at 516 SM Blvd, Jeffrey Merrihue, has been circulating a petition to assist his fellow restaurant owners by demanding the city lower its fees, regulations, and parking restrictions. Support it!

~ Each week, I provide the grim statistics of the COVID-19’s effect in Santa Monica. While others keep the rest home cases and deaths separate from their official city count to keep their city’s statistics lower, I believe you need the full story. This week, Santa Monica has reached 557 total cases, with 50 who have succumbed. Peace be with them. Wear your faceguard!

~ People are fleeing the nation’s cities. Adding to Santa Monica’s density will cause further flight in light of pandemic concerns. The importance of open space (parks) will keep growing. Despite budgetary concerns, this is the time to identify more open space for parkland in our apartment laden community. Also, it’s time to shelve building projects that are not mandatory under state law. Our crystal ball is still cloudy. We don’t know what the long-term effects of this pandemic will be on housing, office space, or hotels. We do know retail rents will decrease; office demand will lessen, and the workforce will expect a less stressful commute and an improved work-life balance. Sixty-two percent of the U.S. working population telecommuted in April. How will they be lured back into hermetically sealed, shared work environments? If 3 out of 5 U.S. workers were able to work from home, where does that leave downtown Santa Monica? We must retool our expectations for our downtown to serve our residents rather than commuters. Claustrophobic conditions will make our city center less desirable unless we react by increasing our open space and adapting to the changing conditions as we grapple with the effects of COVID-19.

~ Last Sunday, I moderated another in a series of SMart conversations about our city. I asked the virtual attendees if they felt their lives in Santa Monica had improved over the past few years. The response was unanimous. Everyone felt the quality of life had decreased in Santa Monica. This informal survey says it all. The interim city manager and city council members should pivot their policies to increase the wellness and happiness of our residents.

“His (George Floyd’s) life mattered—all our lives matter. Black lives matter,” Philonise Floyd said. “I just — I just wish I could get him back… more than another name on a list that won’t stop growing…Stop the pain!”