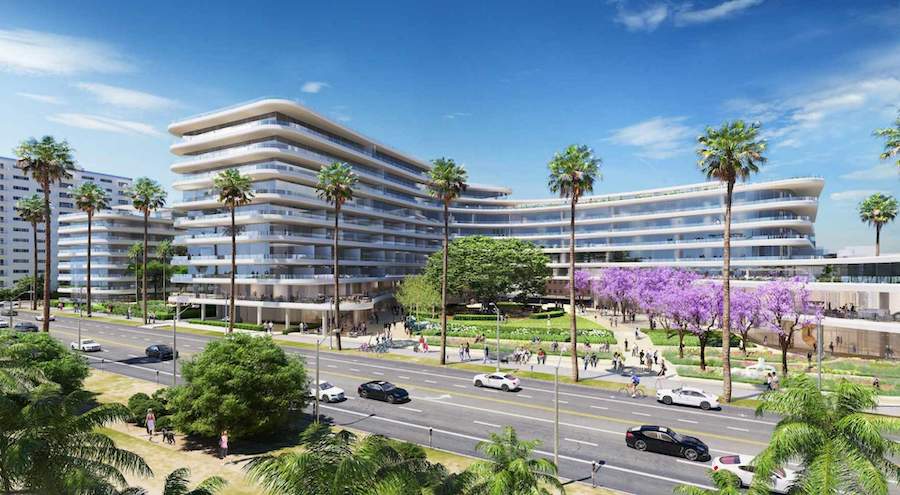 Santa Monica City Council has approved plans that have been in the works for a decade to redevelop the Fairmont Miramar Hotel & Bungalows, despite opposition from the mayor and a councilmember.

In a meeting that began Tuesday night and ended in the wee hours of Wednesday morning, Santa Monica City Council approved the proposed redevelopment of the Fairmont Miramar Hotel & Bungalows with a 4-2 vote.

Under plans from the Athens Group, the hotel will double in size, retaining the existing Palisades Building and Moreton Bay Fig Tree.

The 502,157-square-foot redevelopment proposal, which has been drastically altered three times during a decade-long planning process, calls for 312 guest rooms 60 condominiums and around 18,000 square feet of commercial space. In addition, land will be set aside on 2nd Street for a 100 percent affordable housing complex with 42 units.

The project is expected to provide a boost to Santa Monica’s economy hit hard by the COVID-19 shutdown.

“The revenues that will flow from this project are something we really need to take into consideration, particularly in the dire fiscal straits we are in,” said Councilmember Ted Winterer, who voted in favor of the proposal. “This project is important right now, more than anything else to show that the City is open to people who want to come in and reinvest in our City.”

Mayor Kevin McKeown and Councilmember Sue Himmelrich were the two dissenting votes and both took issue with the inclusion of luxury condos in the proposal.

“I do not believe that this, with the inclusion of luxury condos, is a project that we should be going forward with,” McKeown said. “The alleged connection to the very welcome affordable housing was a red herring. Our laws require a percentage of affordable when housing is built, but in a Development Agreement we can demand affordable housing as a community benefit without having to tie it to any other housing production, especially top-dollar oversized condos.”

“My no vote was also because of the 60 luxury condos which I have been opposed to for quite a long time. I don’t believe they are a requirement to make this project feasible. I also object to the lack of a viewpoint at the top of the project, but I think the two go together to show why this project is not a good Santa Monica project,” Himmelrich said. “In my experience these are not great community partners, they will do whatever they need to do to maximize their profit. This is a private capital company made up of very few holders.”

Councilmember Gleam Davis recused herself from the debate and vote on the project. Davis is married to John Prindle, a high ranking employee with Dell Technologies and Dell’s CEO Michael Dell owns the Fairmont Miramar Hotel & Bungalows through his investment firm MSD Capital. According to Davis, her family would not benefit financially from the Council’s approval of the Miramar expansion but still opted to recuse herself.

Nearly 100 members of the public phoned into the virtual meeting expressing their opinions of the project. According to a tally compiled by the Santa Monica Mirror, 65 percent of speakers expressed support.

“The project may not be perfect in some people’s eyes, but you can’t let the perfect stand-in and stop the good, or even the great, because I think it is a great design, and I also think the Miramar folks have been a great partner in the community to non-profits, to the community as a whole, and I think they will continue that,” said Chris Baca, a longtime Santa Monica resident.

30 percent expressed opposition to the project.

“It’s simply too big. It’s gigantism gone wild. It’s bigger in square footage than the Santa Monica Place, it’s this huge monolithic wall around 2nd Street, and there is no compensatory replacement for the views, light and air that are being lost. There should be a rooftop deck open to the public, free open to the public, so that the City itself and the residents could get something back,” said Mario Fonda-Bonardi, a member of the Planning Commission who was the sole dissenting vote when the project went before the commission on September 9.

Roughly five percent of the speakers were supportive of the project but with some reservations.

“Our city can have a beautiful, redeveloped Miramar hotel, but it also can protect the scale and neighborliness of the city,” said Kay Ward, a nearby resident. “Do not permit an entrance on California Avenue or an exit. As you know the Planning Commission recommended against any driveway on California Avenue…I see all the time kids up and down on California Avenue, usually on their skateboards or e-scooters and bikes, and they are going to Palisades Park and the beach, it will be terrible. There will be too many injuries. Do not put that there.”

Stay tuned for additional coverage of the project in the coming days.