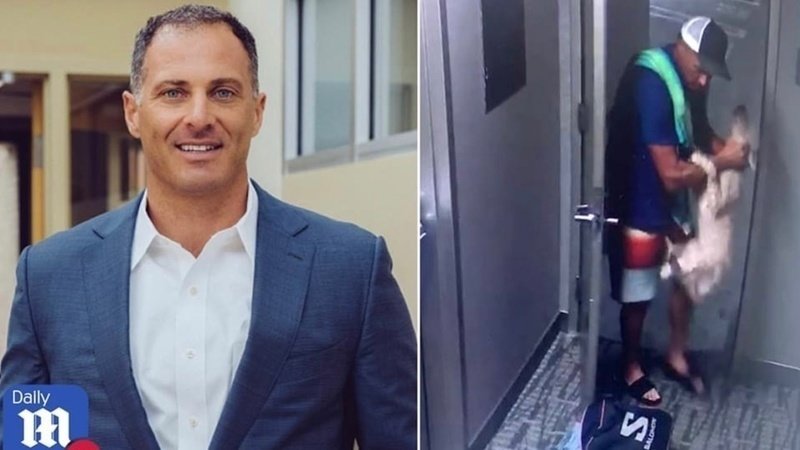 By Timothy Michael and Sam Catanzaro

Jeffrey Previte, the CEO of EBI Consulting, an environmental consulting firm in Los Angeles, was captured on camera at the Seychelle Condominiums building in Santa Monica, aggressively beating his four-month-old dog, Bici.

Security footage outside of Previte’s apartment captured the heinous act after Previte found something on the ground near Bici and then angrily seized the animal by the right side of its head with his left fist. He yanks the dog off the ground, fist clenched around its skin, before slapping the dog while shaking it around.

Opening a door, he then yanks the animal some more as the door closes behind him. A minute later, Previte emerges from behind the door carrying Bici with his right hand clenched around the dog’s throat. Repositioning his hand to carry the dog by its collar, he then slaps the dog again before briefly setting it down and carrying it off-camera.

“There’s nothing illegal about what I did,” Previte claimed after his building’s concierge called him at 9 p.m. on August 22 and allegedly tried to escort money from Previte in return for not reporting the incident. “I said if you need to tell the building, tell the building.” Previte continues “The building manager took it very seriously. I find it very unfortunate that we are even talking about this.”

According to the Santa Monica Police Department (SMPD) on September 4, 2020, the Department received information regarding a potential animal cruelty incident in the 1700 block of Ocean Avenue, the location of the Seychelle Condominiums. When the Animal Control Officers arrived at the location, they were presented with a video of the incident and information pertaining to the involved individual, according to the SMPD.

“The officers attempted to contact the individual involved in the incident and check on the well-being of the dog; however, they were unable to locate the individual or the dog,” the SMPD said. “On September 5th officers conducted a follow-up investigation and were able to make contact with the involved individual via telephone. The officers were able to obtain images showing the dog was still in his care. Additional follow up on the case was conducted to check on the condition of the dog in the video.”

The Santa Monica Police Department (SMPD) says its Animal Services Unit is investigating the incident for a possible violation of Penal Code 597(a).

Penal Code 597(a) is an animal abuse law citing anyone who “maliciously and intentionally maims, mutilates, tortures, or wounds a living animal.” Other subsections of the law mention the inflicting of “unnecessary cruelty”, “needless suffering” and abuse of any kind against animals.

After claiming being a victim of extortion Previte then issued an apology letter to his colleagues and friends.

“I want everyone to know that I truly regret my actions on August 22, 2020. Words can’t fully describe how sorry I am for what happened,” Previte wrote. I lost my temper and took unreasonable and unjustifiable action in attempting to discipline my dog Bici. As I have said, words are not enough here. Bici is no longer living with me and is with another loving family. I have also stepped away from my job and am enrolling in anger management training.”

People for the Ethical Treatment of Animals (PETA) condemned Previte in a statement, saying his apology is “too little, too late.”

“A dog only urinates indoors out of fear, neglect, or an infection—regardless, it’s just as abominable to beat animals for losing control of their bladders as it is children. Jeffrey Previte is a violent man who kills animals for fun,” said PETA Senior Vice President Daphna Nachminovitch, referencing photos of Previte posing with hunted animals. “His ‘apology’—which a traumatized Bici has no way of understanding—is too little, too late, and PETA is calling on him to hand her over to authorities now. Previte should be prosecuted to the fullest extent of the law and prohibited from ever owning an animal again.”