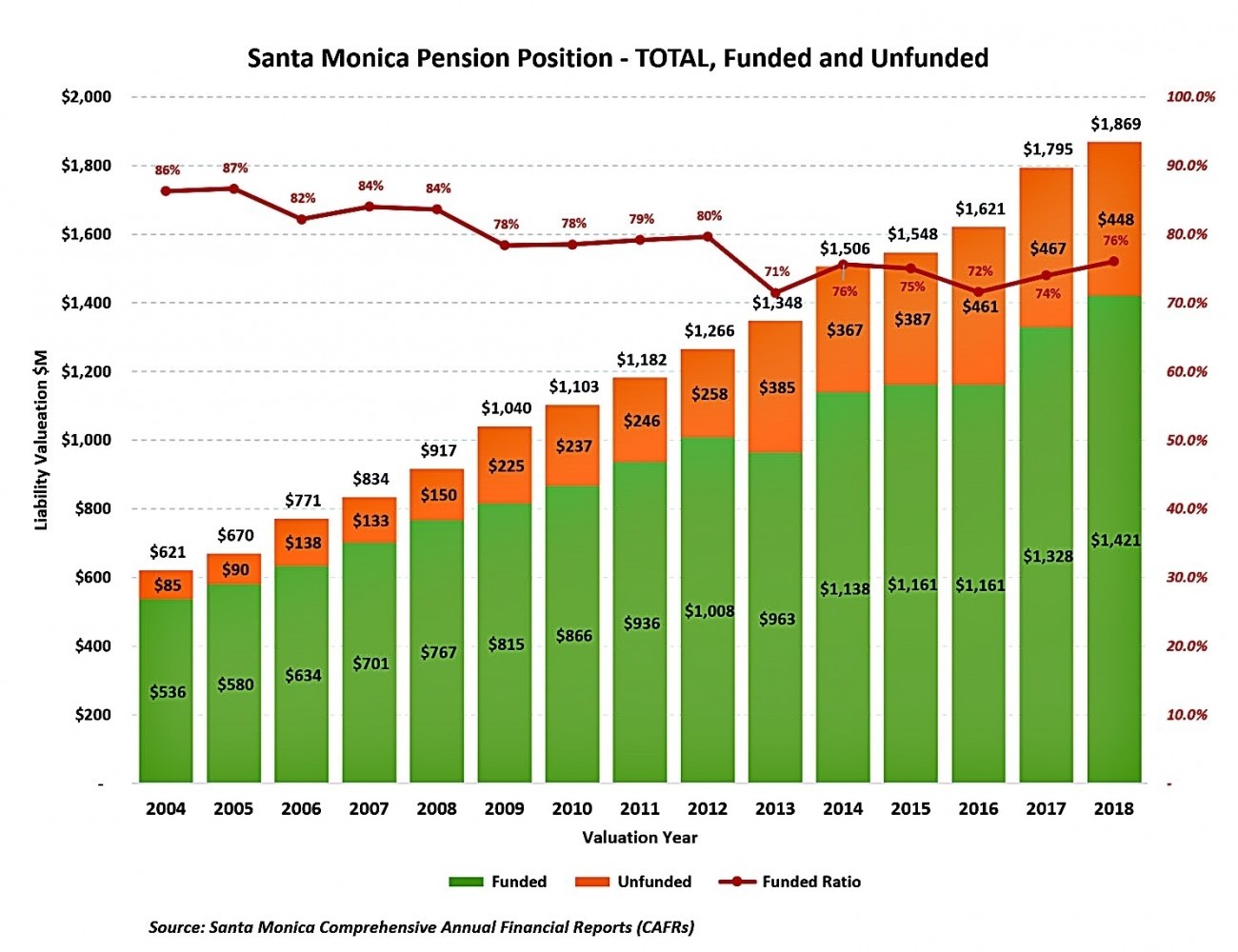 On May 28, 2019, the Council proposed a ten-year, $800M climate sustainability initiative.  At the time, they knew they were sitting on an unfunded pension liability of $448M.  And, they had disclosed it could easily balloon to over $700M with even a minor hiccup in CalPERS investment performance.  And, of course, CalPERS financial performance has fluctuated wildly in the last 5 years.  Starting in 2011, the City has made a total of $33.8M in supplemental payments to CalPERS simply to keep the unfunded liability to the current reported $448M.   In June 2019, the Council approved another ad hoc $45M pay down of the City’s pension unfunded liability along with some concessions to a subset of City employees.  However, combined with Covid-related skipped payments for the next two years, and increasing interest costs, this may only result in maintenance of the existing liability.  Meanwhile, a downside liability risk of around $700M+ remains, triggered by only slight underperformance of currently forecast CalPERS investments.

Potential climate and pension spending works out to between $1.25 to $1.5M BILLION, to be funded over approximately 10 or so years as the climate initiative has been delayed, but not cancelled.  This, from a city with total annual revenues averaging ~$650M pre-Covid, and which will be $535M this year.   Moreover, the growth of the unfunded pension overhang far exceeds the growth of the city revenues.  The unfunded liability has climbed from 19% of our total annual city revenues in 2004 to almost 70% in 2018.  It will likely land between 80% and 90% in this Covid-constrained 2020, with reduced revenues and suspended CalPERS payments.  As it stands, the current pension deficit translates into a potential tax requirement of almost ~$9,000, and potentially up to ~$15,000 for every household in the city.

And, let’s not even talk about the gargantuan subsidy requirements for the 6,152 affordable housing units the City wants to build over the next eight years since there is no Council pushback to the 6th Cycle RHNA state mandate.  And, btw, that subsidy is in large part due to developers getting out of meaningful (say Prop R’s 30%) inclusionary affordable production in their existing and planned projects, and shifts the burden to 100% affordable projects requiring huge City support.

This uncontrolled and myopic spending mentality is creating a financial vortex that is seriously undermining the residents’ future financial stability.  What all this will do is translate into an even larger drive for more revenue.  In this city, that means more hotels and mega projects which, in the best case, drive more socialized costs (i.e. that the projects themselves do not pay for) for services, infrastructure and degradation of our quality of life in congestion, reduced safety, and shuttered local businesses, to name but a few.  In the worst case, they will be built on outdated economic assumptions, deliver few, if any, of the imagined benefits, and become partially empty monuments to myopic agenda-driven thinking.

If nothing else, all this demonstrates three things – the absolute disconnect of resident interests to our city government decisions, a complete denial of financial reality, and the almost complete absence of competent fiscal management.

If this financial trajectory is not flattened and reversed, quickly, the only lifeline left for the city will be to declare bankruptcy.  What happens after that?  Likely replacement of the city employees defined benefit plans with shared risk plans.  The resistance against this would be huge.  In 2013, Stockton declared bankruptcy but still did not terminate the defined benefit pension plans.  Instead, they cut resident services, gutted the employee health care plans and raised taxes.  Two of the three actions directly hit the residents.  If Santa Monica’s Covid-induced budget cuts are any guide, there is no reason to believe that Santa Monica would react any differently.  This result places the resident interests against the public safety interests – one of the worst possible outcomes imaginable.  On top of that, the City’s borrowing costs would spike since its credit rating would be seriously degraded.

Where Do Residents Stand

The upshot – NONE of these increasing financial risks and taxpayer expenditures are, or will, translate into a more livable city or even sustainable (let alone better) quality of life for the residents.  Without achieving true financial sustainability scaled to the size of our resident base, there can be no environmental or any other kind of sustainability.  Period.

We are entering a window in time where the absence of change will greatly magnify to the point of irreversibility, the financial risk and quality of life damage we are already living with.   We will be at-risk strangers in our own downtown.

What additional evidence do we need to determine that a new Council government direction is urgently needed to  refocus our city government back onto the residents?  If not this, then what?

We need competence, experience, leadership, and integrity on our city council. The incumbents have failed. Vote for change this fall. SMart’s picks are de la Torre, Parra, Fonda-Bonardi, and Brock.