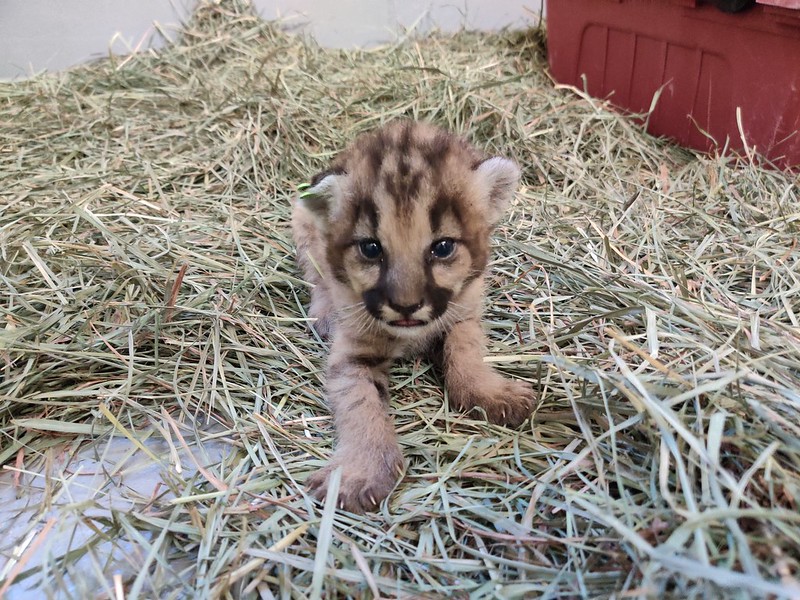 This summer, biologists with the National Park Service (NPS) at Santa Monica Mountains National Recreation Area (SMMNRA) and the California Department of Fish and Wildlife (CDFW) attempted to foster two orphaned mountain lion kittens and keep them in the wild. Fostering involves getting a wild mountain lion mother to “adopt” the orphaned animals and care for them as her own.

They believe this marks the first time such an experiment has been tried with this species. While the foster attempt was not successful, scientists say it was a worthwhile undertaking to try and keep two wild animals in their natural habitat and to learn more about mountain lion behavior. Today, the kittens are thriving in their forever home – a wildlife sanctuary in Arizona. 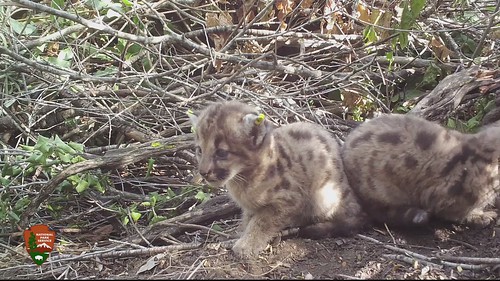 “The story of this fostering attempt is remarkable,” said NPS Superintendent David Szymanski.  “Biologists and managers from four organizations – a federal agency, a state agency, a city zoo and a private sanctuary – came together to try something new. With this effort, we tried to help two orphaned wild animals and further our understanding of this important species.”

“Our shared goal for this project all along was to keep the kittens in the wild and, although the new mother did not accept them, we gained considerable knowledge from this experience,” said Christine Thompson, a regional biologist with the CDFW. “We were also able to successfully place the healthy kittens in a new home. Many thanks go to NPS, Los Angeles Zoo, and the Southwest Wildlife Conservation Center for their dedicated efforts.”

The kittens, female P-91 and male P-92 were discovered on July 7 in the Simi Hills, south of Simi Valley, while their mother, P-67, was away from the den. Biologists performed a general health check, determined the sex of each kitten, took various body measurements, obtained biological samples and placed uniquely numbered and colored ear tags in each of the kittens.

However, just after the den visit, the mother’s GPS radio collar sent a “mortality” signal. The team located P-67, a two-and-a-half-year-old female mountain lion and found her deceased. Without a mother, the 3-week-old kittens could not survive, according to Jeff Sikich, a wildlife biologist with the park who leads the fieldwork on the mountain lion project.

It is not legal to raise or rehabilitate and release mountain lions in California, so in general the only option would be captivity. However, Justin Dellinger, the statewide mountain lion researcher for CDFW, suggested the possibility of fostering the kittens with another mountain lion, P-65, who had recently given birth herself. Her den of three kittens (P-88, P-89 and P-90) had been discovered the day before in the Santa Monica Mountains.

Fostering has been regularly successful in other large mammals such as black bears and wolves, as well as in zoo animals.

“These five kittens were all approximately the same age, which meant we had this unique opportunity to attempt fostering and give these kittens a chance to live in the wild,” Sikich said. “I had tried this with black bears on a previous research project and it had worked, but situations can vary for different species and individuals. I wasn’t sure if it would prove successful with these mountain lions.”

In collaboration with CDFW, the biologists hatched a plan to rescue them. They enlisted the Los Angeles Zoo for help, and biologists there agreed to house the kittens until the fostering attempt could be initiated.

“We were careful not to interact with the kittens any more than necessary,” said Beth Schaefer, director of animal programs for the zoo. “These are not animals that we want to become acclimated to human interaction like zoo animals. At the time, we thought they were going back to the wild, so we didn’t want them to think that humans were a source of comfort.”

On July 16 while P-65 was away from the den, Schaefer brought the orphaned kittens from the Los Angeles Zoo where they had spent the last eight days and met the other biologists in the field. Biologists were able to find two of P-65’s kittens and rubbed urine from one of them onto the orphaned kittens, P-91 and P-92, so that they would smell more like P-65’s own offspring.

Over the next few days, biologists tracked P-65’s movements and noticed that she had moved her den, a normal event for mother lions. On July 20, Sikich and CDFW biologist Dustin Pearce visited P-65’s former den to determine if the new kittens had been left behind. As Sikich got closer, P-91 and P-92 came out and ran directly to him. P-65’s biological kittens were nowhere to be found.

The fostering attempt had proved unsuccessful. The kittens temporarily went back to the Los Angeles Zoo, and then they were moved to the Southwest Wildlife Conservation Center in Scottsdale, Arizona where they will spend the rest of their lives.

The results from the necropsy for P-67, the kitten’s deceased mother, shows that she was found with no food in her stomach, she was relatively thin, and she also had evidence of intestinal disease, known as necrotizing enteritis. She was also exposed to five different anticoagulant rodenticide compounds and to bromethalin, not an anticoagulant but a highly potent rodenticide that provides a lethal dose to rodents in a single feeding. The presumptive cause of death was septicemia, possibly secondary to enteritis, according to the report.

“A contributing factor may have been that she was young and stressed by having kittens,” Sikich said. “She was a good mother and she didn’t abandon them. She kept on coming back to the den and nursing them even in her likely poor state of health.”

P-67 was originally tagged as a kitten herself in 2018, also in the Simi Hills, in a den belonging to adult female P-62. The father of P-91 and P-92 is suspected to be P-78. Biologists tracked the two of them traveling together over a period of multiple days earlier this year. P-78 is currently living in the Santa Susana Mountains, although he has also spent a considerable amount of time east of Highway 5 in the San Gabriel Mountains, the first collared animal in the study to do so.

The kittens are now about three months old and they are showing typical wild cat behaviors – stalking, wrestling, and climbing. Officials at the wildlife sanctuary report that the two cats have developed unique personalities. P-91, the female, is bolder, while P-92, the male, is laid-back.

“They are inseparable and a great comfort to each other,” says Linda Searles, the sanctuary director.

The kittens’ new “next-door neighbor” will be 15-year-old ‘Tocho’, SWCC’s most prominent mountain lion – and the last mountain lion raised from a kitten at the sanctuary. She said that if they all get along, they will eventually share his large enclosure.

“It’s too bad they couldn’t live in the wild, but we’re happy that they can give our old guy companionship,” Searles said. She said that the lions will serve as ambassadors for the Santa Monica Mountains mountain lion population and their species.