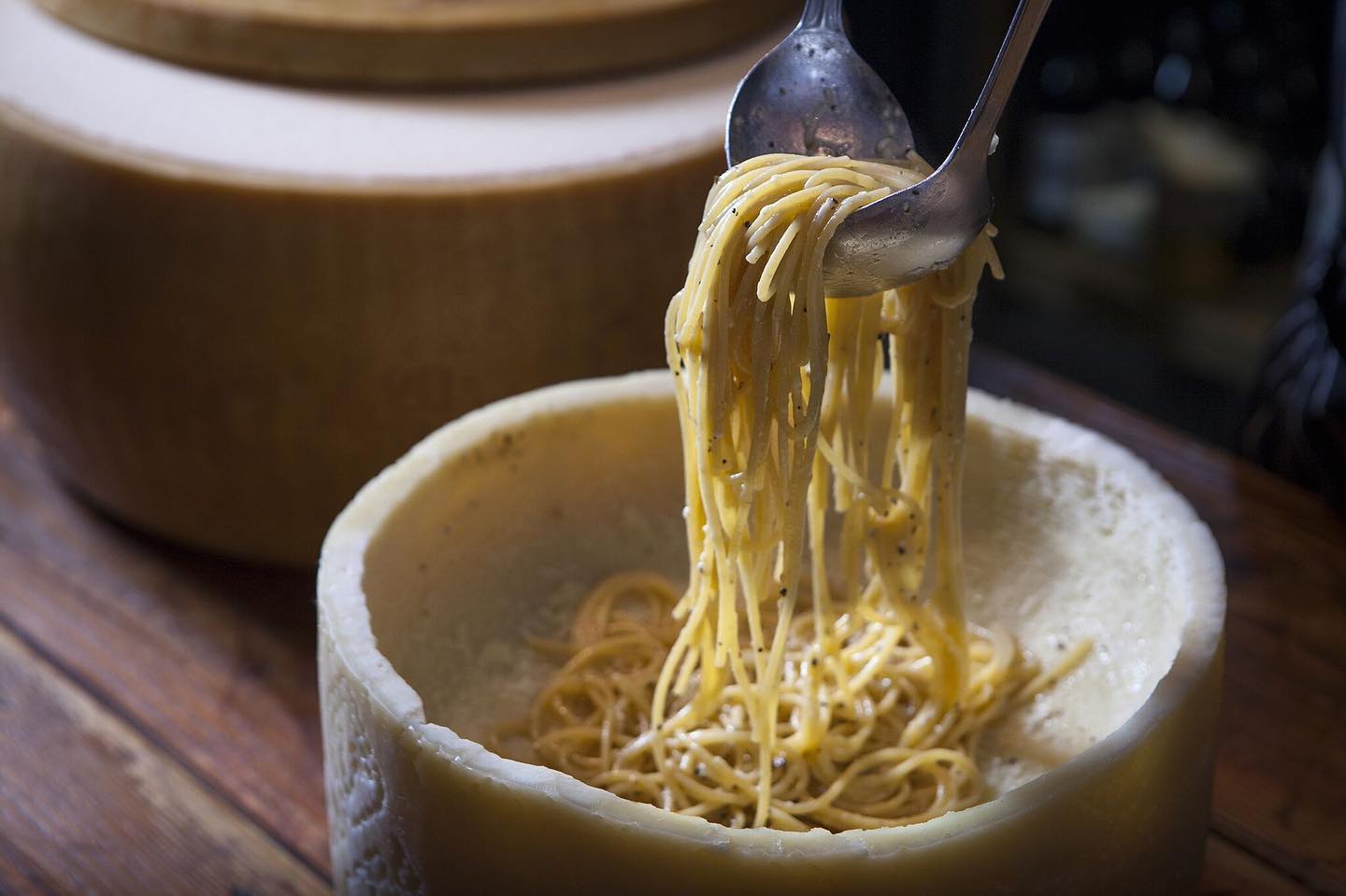 In this follow-up to the Montana Avenue flagship, co-owners Mario Sabatini and Piero Topputo leased, gutted and renovated the space formerly occupied by Chaya at Navy Stree and Main Street in Venice.

Spearheaded by Co-Owner and Executive Chef Piero Topputo, the menu remains consistents with Forma Santa Monica, with dishes exclusive to Venice launching in the coming months. Familiar classics include their signature pastas dalla forma, like the Tortellini with mushrooms, light cream and truffle oil, tossed in a wheel of bella lodi cheese, and the Chitarra Cacio E Pepe tossed in a wheel of pecorino romano.

In addition, a the menu features over 70 cheeses with a cheese bar housing three massive cheese wheels, cut lengthwise and used as giant bowls to toss the pasta dalla format.

While the Santa Monica location serves beer and wine only, Forma Venice has full bar and cocktail list created by local mixologist, Vincenzo Marianella, the mastermind behind cocktail programs at Fia and Providence.

Due to Los Angeles County COVID-19 dining restrictions, Forma is only open for dining on the patio.

Forma Venice will be open for dinner from 4:00 pm to 10:30 pm daily, with plans to expand their hours for lunch in the near future.

A restauranteur has opened an Indonesian restaurant in Venice with hopes of fulfilling an area lacking in the local dining scene.

As reported by What Now Los Angeles, Simpang Asia is set to open on November 9 at Lincoln Plaza, the intersection of Lincoln Boulevard and Vernon Avenue.

“According to [owner Leni Kumalasari], the Venice community seems more open to eating Simpang Asia’s kind of recipes, which she describes as being similar to that of Thai, Indian, and Chinese. Simpang Asia especially emphasizes things like fried rice, noodles, and curry,” What Now Los Angeles wrote.

The restaurant currently has a location open 10433 National Blvd #2. Check out more at http://simpangasia.com/.

As reported by Toddirckallen, Malbec Argentinean Cuisine has closed their Santa Monica location for good at 2628 Wilshire Blvd. Signs on the window announce the space is for lease and the location has been removed from the website. The Toluca Lake, Pasadena and Eagle Rock locations still seem to be open.

Nearby Malbec at 3001 Wilshire Blvd, Toddirckallen reported that Mediterranean Luna Grill has closed, saying the windows are papered over while a note on the front announces that they are closed.

Fresh salads and sides are also available, including traditional Greek salads and Avgolemono – “lemon soup”. In addition, the “Nick’s Fries” are smothered with feta, garlic, spicy yogurt and any gyro meat or falafel.

In August 2019, Swingers closed their Santa Monica location on Lincoln Boulevard. Then in April of this year, the diner closed their 8020 Beverly Blvd location in Los Angeles.

As reported by Eater LA, however, former general manager Stephanie Wilson bought the restaurant from Committed, Inc., the Sean MacPherson-owned restaurant group after the April closure and plans to reopen it in the near future.

According to Eater, when Swinger reopens it will be from 7 a.m. to 10 p.m., with outdoor seating and takeout, with the same classic menu of course.