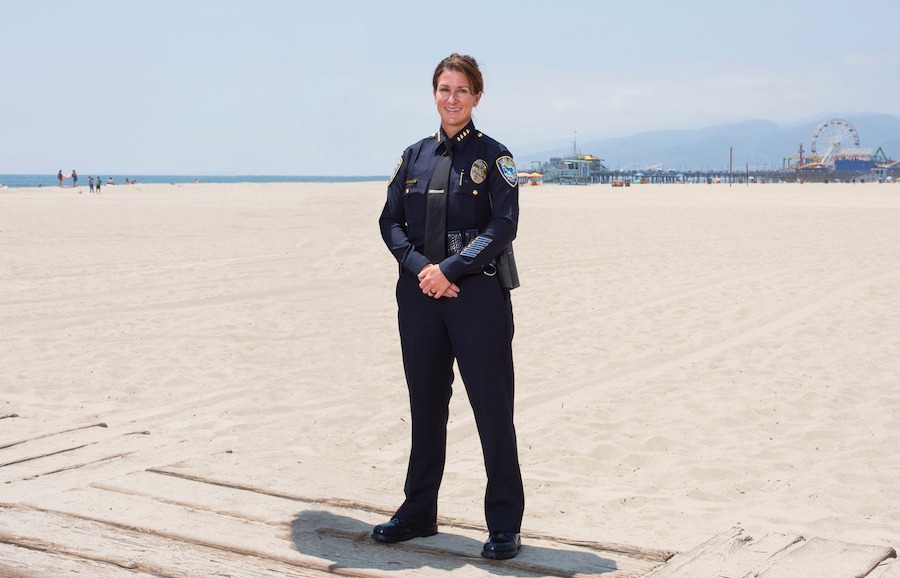 Santa Monica has announced its chief of police Cynthia Renaud is retiring, citing “strained community-police relations” following May 31 civil unrest and looting in the city.

“Serving as Chief in Santa Monica has been one of the highlights of my career,” Renaud said. “I am proud of our record over the past two years in times of unprecedented scrutiny and challenge for law enforcement.

Chief Renaud came to Santa Monica in April 2018 after serving as Chief of Police in Folsom for seven years.

Renaud’s leadership came under fire following the Santa Monica Police Department’s (SMPD) May 31 use of tear gas and rubber bullets on a crowd of predominantly peaceful demonstrators protesting the police killing of George Floyd while looters pilfered businesses just blocks away.

“Recognizing that recent events both here in Santa Monica and around the nation have strained community-police relations, Chief Renaud has made the decision to step aside so that the Santa Monica Police Department can continue to move forward,” the City said in response to the question of whether Renaud’s retirement is due to the events of May 31.

In the wake of the May 31 events, a petition was launched calling on Renaud to resign. At the time of publishing, the petition has over 66,000 supporters.

On October 9, the Santa Monica City Attorney’s Office announced the selection of OIR Group to lead an independent after-action review for the events of May 31. According to the City, OIR’s goal is to complete the report and evaluation by April 7, 2021.

“The Chief’s resignation may leave unanswered questions about May 31st, but we remain committed to a thorough and transparent accounting of that day’s events. We have a contract with the OIR Group, and they are already at work,” said Santa Monica Mayor Kevin McKeown.

“No one knows the Santa Monica community and Santa Monica Police Department like our friend and longtime leader, Jackie Seabrooks,” said Interim City Manager Lane Dilg. “This is a critical moment for Santa Monica. I have every confidence in Chief Seabrooks and look forward to working together to provide for community safety and wellbeing, as well as to advance public safety reform work underway.”

Seabrooks retired as Santa Monica’s Chief of Police in September 2017, where she began her career in 1982. Under her leadership, SMPD implemented the body-worn camera program and implicit bias training.

“I am certainly humbled at being asked to once again serve the Santa Monica community,” said Seabrooks. “I am equally excited to begin working alongside the women and men of the Santa Monica Police Department as we continue to focus our attention on all facets of community safety during these unprecedented times.”

Chief Renaud will assume the presidency of the International Association of Chiefs of Police (IACP) on October 23, according to the City.

On October 17, Santa Monica City Council will vote on a separation/retirement agreement in which Chief Renaud would receive severance pay in an amount equal to four months of her base bi-weekly salary. In 2019 Renaud’s regular pay was $290,231 annually.

“Severance pay will be conditioned upon Chief Renaud providing the City with the reasonable information and assistance necessary to allow a smooth transition of duties to her successor as well as participating in interviews and providing materials requested by the OIR Group in conjunction with its review of events leading up to, during, and following the protests, looting, and violence that occurred in Santa Monica on May 31, 2020,” reads a City staff report.