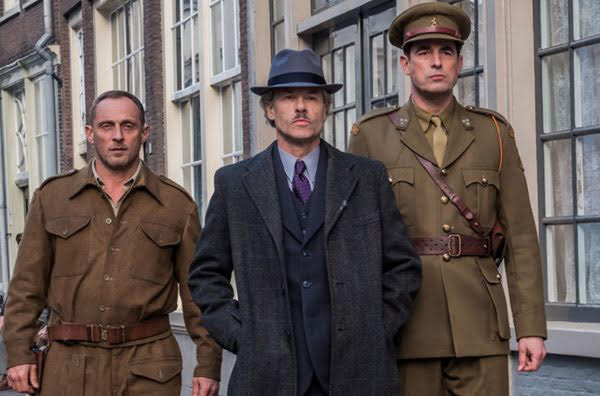 Apparently the “go to guy” for art-related films seems to be the talented Danish actor Claes Bang. He starred in the The Square,
The Burnt Orange Heresy and currently co-stars in The Last Vermeer, written by James McGee, Mark Fergus and Hawk Ostby, based on the book “The Man Who Made Vermeers” by Jonathan Lopez. This whodunit mystery, inspired by a true story, is well directed by Dan Friedkin, who makes an excellent directorial debut. Each of Bangs’ characters is well developed especially in “The Burnt Orange Hersey” where it does a surprising 360. What is most fascinating about co-star Guy Pierce’s work is that he allows his characters to completely take over, leaving no traces of himself. He is one of only a few transformative actors and delivered memorable performances in Memento, L.A. Confidential, and Lawless.

Pierce does it once again as the notorious Dutch painter Han Van Meegeren, an effete bon vivant artist who was famous for his decadent soirees during World War II where top Nazi officials enjoyed overflowing food, wine, and nights of debauchery at one of his over 500 properties in Amsterdam. He also sold Dutch treasures to top Nazi officials, including Hermann Göring. While Van Meegeren enjoyed his lifestyle, Bang’s Captain Joseph (Joe) Piller, a Dutch Jew and a former tailor who loved to play the piano, was fighting in the Resistance. His record was spotless and after the war was assigned to tracking down and identifying stolen works of art, mostly from Jewish people, with the goal of returning them to survivors or their families.

It is now May 29, 1945, three weeks after the fall of Hitler’s Third Reich. While Joe searches for stolen treasures, in the streets there are public executions by firing squads for people guilty of collaboration with the enemy. Joe is particularly interested in how Göring came into possession of Vermeer’s “Christ and the Adulteress,” and traces the sale to Han Van Meegeren, who he arrests. In a stark jail cell, the arrogant artist requests paints, paintbrushes, and canvases. He is to be tried and if convicted, will face the firing squad. The stories that Han tells Joe begin to plant doubts that he is guilty. He insists that he painted the Vermeers and sold the fakes to the Nazis for exorbitant amounts of gilders, up to 1.6 million. In the meantime, the Dutch government wants him in their custody and sends some goons to snatch him from prison. On hearing this, Joe races back to the prison and takes Han to a loft where he can paint while he continues his investigation. The artist reveals that despite having art critics spit on his work, he knew he was an excellent painter and decided he would pull off the hoax of the century by painting a number of pieces and then pawning them off as Vermeers. Those transactions made he and his wife incredibly affluent, owning multiple homes and enjoying a lush lifestyle. However, the government agents ultimately track him down and throw him into their prison. Despite being incarcerated, Van Meegeren maintains his elitist demeanor and still insists he painted those Vermeers. Joe enlists his former army buddy Esper, well played by Roland Møller who discovers a treasure trove of photos and cash hidden under the floorboards of Han’s studio, which included pictures of Joe’s wife attending parties where Nazis were in attendance. He confronts her and she insists that although she worked for a German officer, she was able to funnel information that saved the lives of many people. They separate and an attraction begins to heat up between he and widowed Minna, played by Vicky Krieps who is also assisting him in the investigation.

Han is now on trial and all the Vermeers that he claims he painted are displayed in the packed courtroom. Unfortunately for him, the one person who could back up his claim is deceased. With dramatic flair, he testifies that the art world treated him with distain and he deliberately painted the forgeries that fooled some of the best authenticators in the art world, bragging that one of his counterfeits hangs in Washington’s National Gallery of Art. Experts are called to testify, all of who had authenticated the paintings as being genuine. The accused explains in great detail how he painted the fakes – from the kind of brushes, paints, and canvases he used, as well as the chemicals applied for the aging process. Joe, who is acting as his co-attorney, begs the judges to let him perform an acid test to prove the paintings are fraudulent, but the judges refuse. They convene and in just minutes render a guilty verdict punishable by death. The courtroom explodes in shock and what happens in the closing minutes will have you on the edge of your seat. Yes. It’s an intriguing but true cliffhanger.

Technically, the film is perfect from the settings to costumes to the music but I would be remiss if I didn’t mention Remi Adefarasin cinematography, which beautifully captures the changing physical portrait of post-war Holland.