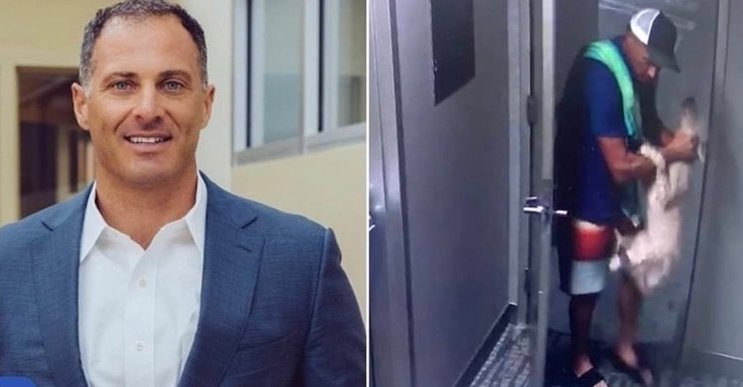 Jeffrey Previte charged with one count of animal neglect

By Sam Catanzaro and Timothy Michael

The former CEO of an environmental firm caught on film abusing his dog could face up to six months in prison after the City of Santa Monica charged him with animal neglect.

On Friday, the Santa Monica City Attorney’s Office announced that it filed one count misdemeanor charge of animal neglect against Jeffrey Previte.

If convicted as charged, Previte faces up to six months in jail and could be ordered to pay a fine of up to $500.

“There’s nothing illegal about what I did,” Previte claimed at the time after his building’s concierge called him at 9 p.m. on August 22 and allegedly tried to escort money from Previte in return for not reporting the incident. “I said if you need to tell the building, tell the building.” Previte continues “The building manager took it very seriously. I find it very unfortunate that we are even talking about this.”

According to the Santa Monica Police Department (SMPD) on September 4, 2020, the Department received information regarding a potential animal cruelty incident in the 1700 block of Ocean Avenue, the location of the Seychelle Condominiums. When the Animal Control Officers arrived at the location, they were presented with a video of the incident and information pertaining to the involved individual, according to the SMPD.

“The officers attempted to contact the individual involved in the incident and check on the well-being of the dog; however, they were unable to locate the individual or the dog,” the SMPD said. “On September 5th officers conducted a follow-up investigation and were able to make contact with the involved individual via telephone. The officers were able to obtain images showing the dog was still in his care. Additional follow up on the case was conducted to check on the condition of the dog in the video.”

After claiming being a victim of extortion Previte then issued an apology letter to his colleagues and friends.

“I want everyone to know that I truly regret my actions on August 22, 2020. Words can’t fully describe how sorry I am for what happened,” Previte wrote. I lost my temper and took unreasonable and unjustifiable action in attempting to discipline my dog Bici. As I have said, words are not enough here. Bici is no longer living with me and is with another loving family. I have also stepped away from my job and am enrolling in anger management training.”