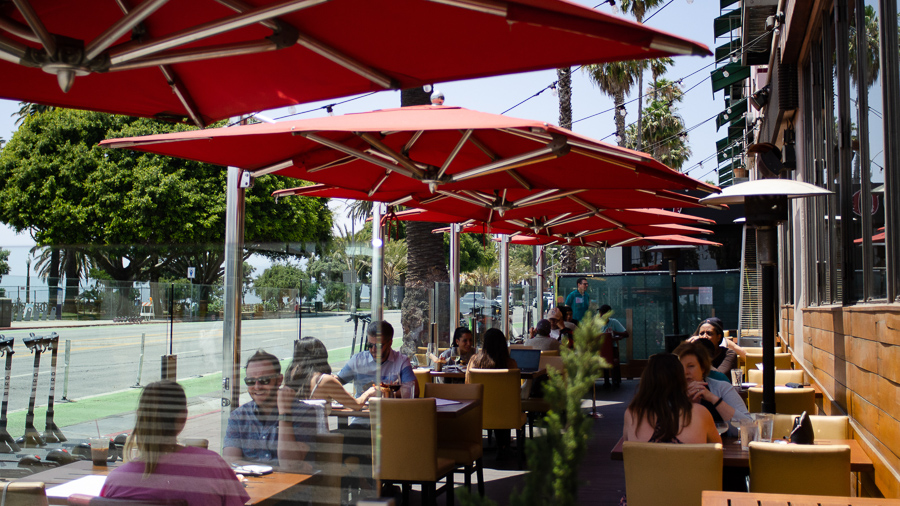 Local restaurants are having to make some big changes in order to comply with the new COVID-19 guidelines. Hear what Westside chefs have to say about the new restrictions that limit restaurant capacity to 50 percent.

LA County officials announced that on November 20 that outdoor dining would be reduced to 50 percent for bars, restaurants, breweries, and wineries. The stricter protocol comes following the rise of COVID-19 cases in LA County for the third time. Recently cases had risen to around 3,000 per day.

In addition, county health officials say that if the five-day average of cases surpasses 4,000, all outdoor dining will be suspended. On Thursday, the county reported over 5,000 cases.

The regulations have provided a new challenge for local restaurants, including many on the Westside.

“Sometimes it feels like our industry is used as the rudder steering this ship — no other industry has been impacted so tumultuously as much as ours has,” Sam Trude of Great White in Venice told Eater LA. “We’re one of the lucky ones because we have a loyal customers supporting us. Our heart goes other restaurants and industries that aren’t able to open.”

Other restaurant owners who have already adapted to pandemic changes say they feel frustrated.

“There is no capacity limit on my patio, we only have nine tables in Palms and 30 tables in Torrance,” Ivan Vasquez of Madre in Torrance, Palms, and West Hollywood told Eater. “With our patio not even getting full we are already at 50 percent capacity. Restaurants like Madre have already spent thousand of dollars in umbrellas, heaters, tables, chairs, grass, lighting, face shields, outdoor barriers, tents, contractor labor cost, canopies, training, sanitizing stations, permits, and licenses.”

Jeffrey Merrihue of Heroic Italian in Santa Monica said the restaurant understands the need for safety but feels like the new outdoor measures are counterproductive and will be harmful.

“Heroic appreciates the need to fight the current second surge of COVID and indeed think the curfew is a good idea. The restriction on outdoor dining, however, makes no sense. All medical studies encourage outdoor activity noting that the vast majority of infections come from under-ventilated indoor activity. Driving people indoors in the middle of the flu season will only make things worse. Also, 95 percent of all outdoor dining is dramatically smaller than the indoor dining it is supposed to augment/replace. This reduction is like splitting a grain of rice into four pieces,” Merrihue told Eater.

Others were more blunt in their assesment.