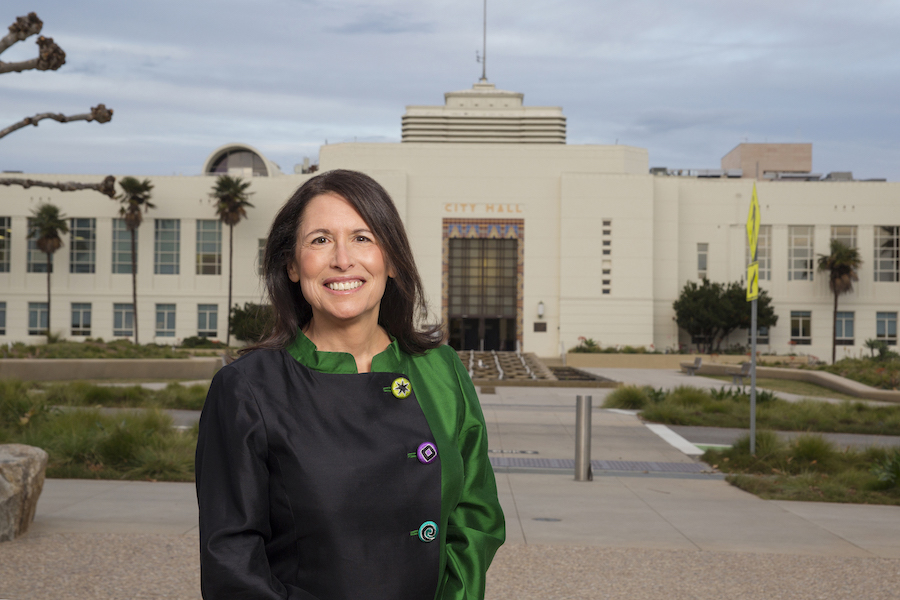 Sue Himmelrich is Santa Monica’s new mayor after being selected by a recently-installed City Council.

“We have an opportunity to move our community forward past this deadly virus, past our differences, and toward a future that we can all be proud of and one that reflects the best of who we are as Santa Monicans,” Mayor Himmelrich said. “I look forward to doing the hard work ahead with my colleagues and to opening lines of two-way communication with community members at a time when connection is harder than ever.”

At a December 8 meeting, City Council selected Himmelrich as Santa Monica’s mayor with a two-year term. Newly-elected Councilmembers Phil Brock, Christine Parra and Oscar de la Torre, along with incumbent Kristen McCowan voted for Himmelrich, who voted for herself. Outgoing mayor Kevin McKeown voted for Gleam Davis, who also voted for herself. In earlier rounds of voting, McKeown unsuccessfully four times motioned to have Davis and Himmelrich each serve a one-year term citing “continuity and leadership and experience.”

“I do believe that the six years I served on the Council qualify me for two years,” Himmelrich said in response to McKeown’s third motion.

Himmelrich– an attorney by trade who has lived in Santa Monica for 28 years and works as Special Counsel for the Western Center on Law and Poverty–joined City Council in 2014 and was re-elected in 2018.

“I have been on this council for six years. I have never sought a leadership position on this council until this moment because I think we are at a critical moment for Santa Monica both because of the pandemic that we all are suffering in and because of the divided nature of our community,” Himmelrich said. “Right out of the box one of the first things I am going to do is set up a personal, not a city, but a personal Zoom meeting that I will hold once a week with the residents of our city to hear what you have to say.”

Following Himmelrich’s selection, Kristin McCowan, a second-generation Santa Monican born and raised in the Pico neighborhood, was chosen as mayor pro tempore, also for a two-year term. McCowan–a former member of the Obama FEMA administration currently working as Executive Director of the Getty House Foundation–became the first Black woman to serve as a Santa Monica City Councilmember when she was appointed to fill a seat left vacant by Greg Morena in July.

“If we can put perceived differences aside, I do think that we can all really work together for the residents of this community,” McCowan said. “I am committed to continuing to work with all Santa Monicans to help our economy recover from COVID, reimagine public safety, compassionately address our unhoused brothers and sisters, improve access to affordable housing and bring about racial justice.”

The meeting, held virtually, began with the official acceptance of the election results and the swearing-in of the newly-elected councilmembers. In the recently-certified election of four councilmembers, challenger and Arts Commissioner Brock finished in first place with 19,319 votes as a member of the slow-growth “Change Slate”.

“I am humbled by the support of over 19,000 of my fellow residents in this election,” Brock during the meeting. “For those of you on this dais who did not support me during the election, I offer my hand in cooperation to work together for this city that we love. I pledge to restore our public safety, dramatically reduce homelessness, stop the overdevelopment of our 145-year-old beachside town and bring the desires of our residents to the forefront of every discussion in this chamber.”

Incumbent Gleam Davis finished in second place with 18,153 votes. Davis– who works as corporate counsel for AT&T–joined the City Council in 2009 to fill the seat left vacant by the passing of Herb Katz.

“I look forward to serving with all of you in the next couple of years. We have a lot to do. It obviously is a very difficult time but I think that if we all recognize that the important thing here is what is best for Santa Monica and all of its constituents, that we will be able to get through these difficult times. Santa Monica is resilient and our resilience stems from our strong belief in community and our strong values,” Davis said.

In third place was challenger Christine Parra, another member of the Change Slate, who works as head of emergency services for Culver City.

“I look forward to working collaboratively with my colleagues, residents, neighborhood groups and businesses to effect change and move our city in a direction that is more resident-oriented with quality of life issues top of mind. It’s my intent to prioritize public safety, homelessness, irresponsible development and real affordable housing solutions for Santa Monica residents, and look at ways on how we can support our small and local businesses,” Parra said.

“Three incumbents lost to three challengers and it is important to recognize that the residents of this city want change. They want to see improvements to public safety. They want to return to the parks and to our public space. They want to make sure that we deal with the homelessness crisis in a way that is responsible and compassionate,” de la Torre said. “We need to stop the irresponsible development that is destroying the character of our city. We need to make sure that our public space is protected and that we expand green space for the residents.”

Also at the meeting, outgoing Mayor Kevin McKeown–who led the city through a pandemic that forced hundreds of city layoffs due to a fiscal shortfall–said Santa Monica is “poised for resurgence.”

“Members of our community have supported each other through a truly challenging year, and we must commit to each other’s health and safety for another few months until we all have access to COVID vaccines,” McKeown said. “Being your Mayor this year has been difficult, certainly, but a great honor. Based on the work we’ve done together, Santa Monica is poised for resurgence as the pandemic recedes and the economy recovers. Led by a new Council and a new Mayor, we will discover a reinvented Santa Monica that proves our commitment and our resilience.”