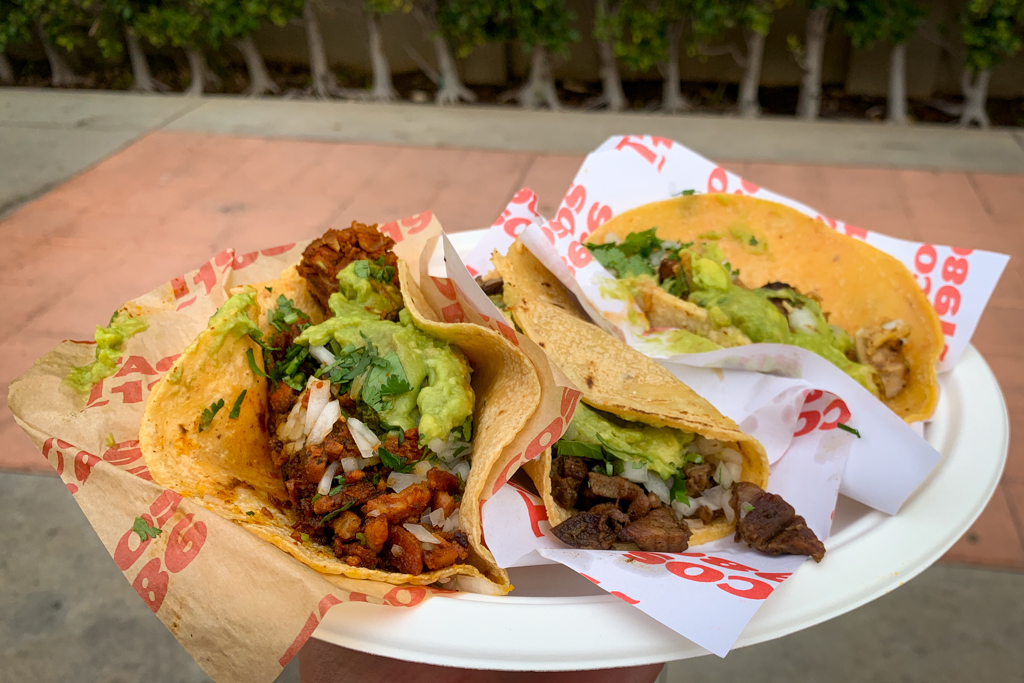 In a city filled with world-class Mexican food, it is difficult for a taco spot to stand out. A Tijuana taqueria in Westwood, however, rises above the fray by offering no-frill, insanely delicious tacos alongside some of the best salsa in town.

Tacos 1986, with locations in Westwood Village, Pasadena, Beverly Grove, Burbank and DTLA, keeps both the menu and food simple. Available are tacos, quesadillas, mulitas and crunchy vampiros filled with either Asada, Adobada, chicken or mushrooms. For lunch, I ordered three tacos: Asada, Adobada and chicken, each $3.25. The food was ready within 10 minutes and I took the feast to the hood of my car to eat.

All the tacos came topped with guacamole, onions and cilantro. I also asked for all three salsas on the side: Verde, hot and mild.

I decided to try the chicken first since it was likely the most subtle. Despite a nice char, the meat is still juicy, a rarity in grilled chicken tacos. The flavor is nothing special but when topped with the top-notch salsas (more on this below), it becomes a very solid taco. Still, the chicken was by far the weakest of the three tacos.

Next up was the Asada taco which stood out by keeping it simple. The meat has that classic Asada flavor with an amazing texture: tender yet slightly crunchy. Without just the guac, onions and cilantro, this is a fabulous taco. With the addition of the salsas (particularly the Verde), the taco becomes special and my favorite of the three tacos.

The Adobada (pork marinated in a “red” chile sauce) is very solid as well. Not quite as good as the Asada, but still a damn good taco. The flavor is subtle in a good way. Oftentimes a really good, saucy taco has the tendency of overpowering your taste buds and when biting into another type of taco the taste is still there. This is not the case with the Adobada at Tacos 1986. It has a good bite alongside some savory-sweetness and just enough taste to not require any salsas.

In addition to the stellar tacos, three additional factors take Tacos 1986 to the next level, the most important being the salsa. The Verde is a perfect balance of sweet, spicy and bitter. The hot has a unique almost hummus-like consistency and goes very well with the chicken. The mild (usually the weakest salsa in my opinion) at Tacos 1986 is extremely flavorful. With hints of garlic, this mild salsa is in many ways similar to a marinara sauce and pairs well with all the tacos.

The next factor is freshly-made tortillas. Slightly larger than an average, the tortillas at Tacos 1986 manage to be sturdy without being thick or chewy. These tortillas allow the restaurant to add a healthy portion of meat to the tacos. This leads to the third factor that takes Tacos 1986 to the next level: portion size. As a hungry man, three tacos often is not enough for me while four tacos seem a bit extravagant. Three tacos at Tacos 1986, however, was the perfect amount of food. If I wanted a light lunch, two would have satisfied me.

Overall, this was one of the better lunches I’ve had in a while. When gauging a restaurant, I like to ask myself “would I take a friend from out of town here?” At Tacos 1986, the answer is a resounding “yes”.

Lincoln Boulevard development to include 30 units By Toi Creel Plans for a multi-family housing development in downtown Santa Monica...

Breaking down the bacon breakfast burrito from Santa Monica’s Holy Guacamole By Kerry Slater A hole in the wall rolls...