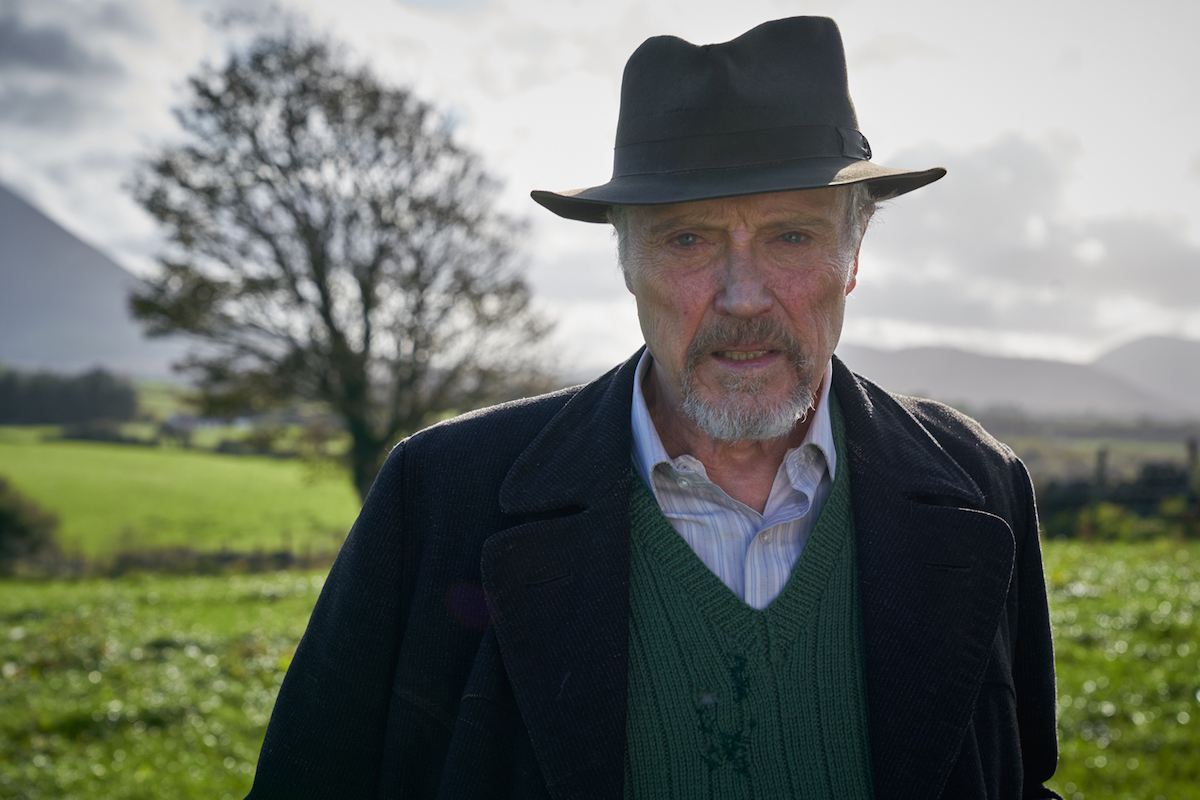 Once upon a time, in Ireland’s bucolic countryside, there lived a farm girl named Rosemary Muldoon (Emily Blunt) who was in love with her next door neighbor, Anthony Reilly (Jamie Dornan,) since she was ten years old.  As she grew up, her love for him never faded as she saw this shy, rather eccentric man as her handsome prince, despite rumors that he was not quite right in the head.  Like most fairy tales, there were a few bumps along the way to possibly achieving her goal, which was to marry him.

With a lone mountain in central Ireland’s rural County Mayo as a backdrop, John Patrick Shanley (Doubt, Moonstruck) has created a love letter to the Irish people with his film Wild Mountain Thyme, the title of which comes from a Celtic folk song.  Written and directed by this highly respected playwright, Shanley adapted the script from his Tony-nominated stage play, Outside Mullingar, capturing on film the heart and soul of the simple people living in this tiny farming community.  The sweeping establishing shots of some of Ireland’s historic sites were beautifully captured by Stephen Goldblatt’s cinematography, whose superb camera work permeated the entire film.  The first voice we hear is that of Tony Reilly, played by the inimitable Christopher Walken, and thus the tale begins.

Now in her thirties and a bit depressed, all Rosemary Muldoon wants is to be married.  She laments, “I have no purpose.  I am just a girl and the world is full of girls.”  Separating the Reilly and Muldoon farms are two gates belonging to the Muldoons, and has been a bone of contention between the two families for decades. Tony is very rough on his son Anthony observing that there was something wrong with his face – that it was that of a Kelly face from his mother’s side. Being riddled with so many insecurities, Anthony accepts yet another thing that is wrong with him.  But, there is something much more profoundly wrong with him that he has keep hidden from everyone, including Rosemary.  To add even more insult to injury, besides pressuring his son, to get married, aging Tony finally tells him that he’s probably never going to marry and is not going to leave the farm to him but instead will sell the land to his nephew Adam, a hot-shot Wall Street tycoon well played by Jon Hamm.  This hard-core New Yorker has no idea about the life of these farmers and shows up in a Rolls-Royce, which Rosemary thinks is laughable.  Anthony realizes that if he wants to keep the farm, he’d best propose to Rosemary.  In the meadow facing a donkey, he practices what he is going to say and gets down on one knee in front of the donkey, asking for her hand in marriage.  Overheard by one of the townspeople, needless to say the word spread, reinforcing the belief that there was something very wrong with him.   Anthony is hell bent on proposing, but before going through the two gates, he searches in his pocket for something that he cannot find and abruptly turns around and leaves.  In the meantime, like in any good Irish story we have Rosemary’s dear mother, Aiofe Muldoon, wonderfully played by Dearbhla Molloy, who reprised her stage role.  She is quite ill and as it turns out, so is Anthony’s dad, and when almost on his death bed, decides to make amends with his son and at last professes his love for him.  Whip out a tissue for the scene between father and son as it’s one of the most emotional scenes in the film.  With both parents now gone, these two now 30-something friends will each own their respective farms.   There is a brief attempt at romance between Rosemary and Adam which quickly fizzles out, making her even lonelier and more determined than ever to get her man.   What ensues is a hilarious scene of seduction unlike anything you’ve ever seen.  The most talented Emily Blunt delivers what could be called a cunning tour-de-force performance for all stops are off and we see the full scope of her extraordinary acting skills.  She is truly delightful as is Jamie Dornan’s characterization of sad-sack Anthony.  But don’t stress.  Anthony works up the courage to reveal his deep, dark secret, which is really weird, and her response will be surprisingly different from what you might expect.  Now, what Irish tale would be complete without a rousing bar sequence and Shanlan delivers such a scene where Rosemary and Anthony sing a beautiful Irish ballad. The question is:  Did the princess finally get her reluctant prince?  Watch the film to find out the answer to that question.