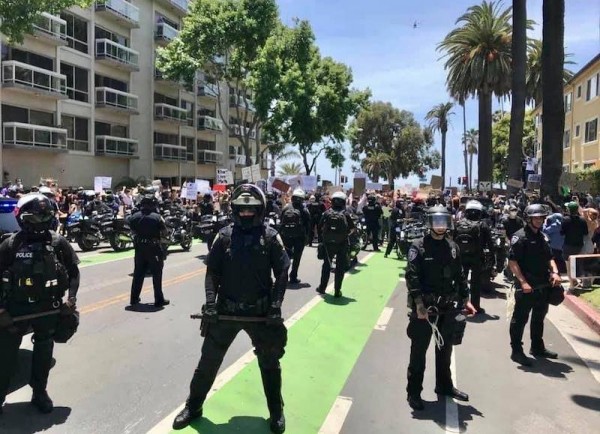 Claim settled between City of Santa Monica and police union

Santa Monica lawmakers recently approved a settlement to pay Santa Monica police officers overtime for work during the May 31 civil unrest and looting.

On December 29, 2020, Santa Monica City Council unanimously approved a settlement to pay Santa Monica Police Department (SMPD) officers $85,000 in overtime wages for work related to the events of May 31.

“The City does not admit the allegation, or any entitlement to overtime compensation, but to avoid the expense and burden of further litigation, we recommend settlement,” said Santa Monica City Attorney George Cardona at the meeting.

On May 31, rioters, taking advantage of a peaceful protest against the police killing of George Floyd, looted hundreds of Santa Monica businesses. The SMPD was criticized for its response to the event, at one point firing tear gas and rubber bullets on a crowd of protestors while just blocks away looters tore through downtown Santa Monica. Former SMPD Chief Cynthia Renaud stepped-down months later due to her handling of the unrest.

The recent settlement covers only lieutenants and captains represented by the union Santa Monica Police Officers’ Association (POA), who had filed a claim against Renaud and Interim City Manager Lane Dilg on August 25. The union sought overtime compensation between May 31 and June 12, citing its contract with the city that provides overtime compensation for officers working special events.

“On or about May 31, 2020, then Chief of Police Cynthia Renaud ordered all Lieutenants, Captains, and the Acting Deputy Chief to work during a special event related to protests that occurred between May 31, 2020 through June 12, 2020 resulting in work full 18 hour days during the period of protests,” reads the claim. “Like a concert or marathon…a protest is a unique occurrence that constitutes a special event outside normal duties as management employees.”

The settlement also modifies the city’s contract with the POA. Changes include: narrowing the definition of a special event, giving the police chief discretion to pay overtime during special events, limiting union members’ ability to grieve an SMPD Chief’s decision relating to overtime pay for special events.