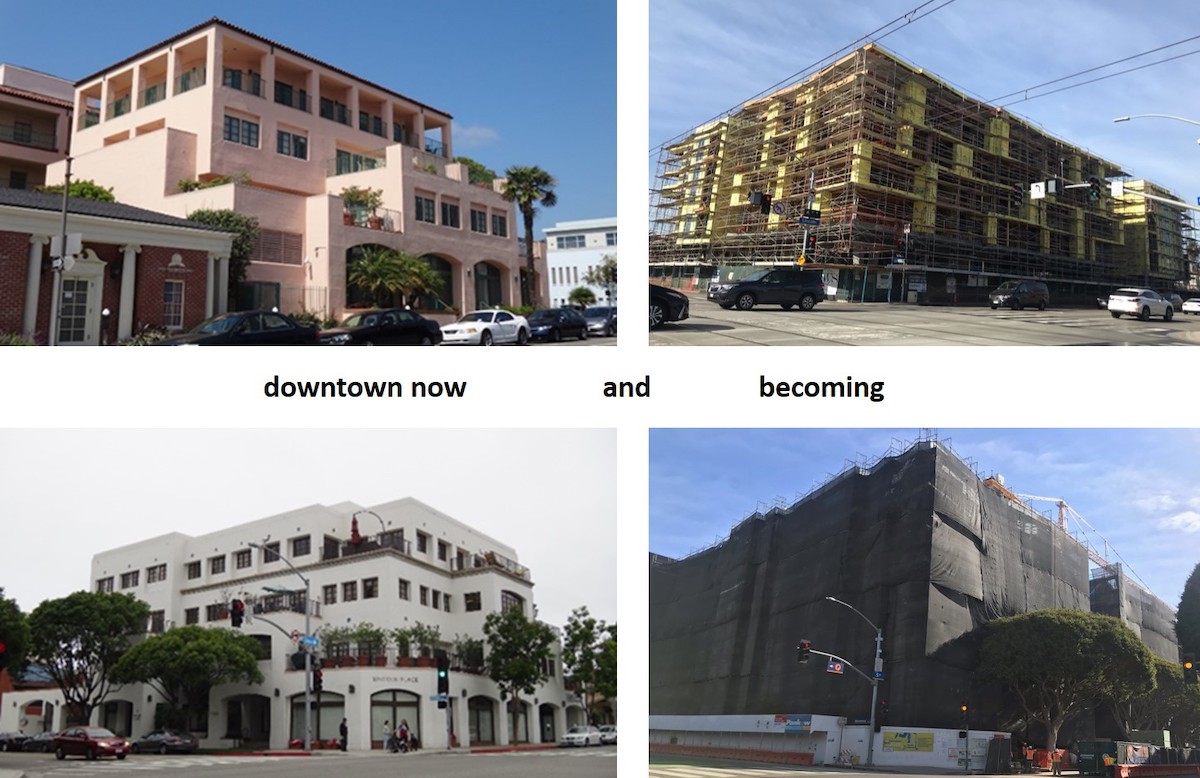 Every 8 years, the state requires cities to update their planning code’s “housing element” to reflect the number of dwelling units that SCAG (Southern California Association of Governments) determines each city within their countywide jurisdiction is required to provide under threat of financial penalty.  Without explanation, this number increased from 1,600 units in the current cycle (2014 – 2021) to 8,900 in the next cycle (2022 – 2029), with 6,000 of these units to meet “affordable” standards.

Last week’s Part 1 article focused on what I’m calling a failed marriage between recent city councils and the development community in providing only 6 – 8% of “inclusionary housing” instead of a goal of 30% while managing to increase market rents on the remaining units including workforce housing and contributing to homelessness!

This week’s article focuses on the development communities effort to “upzone” commercial and multi-family residential projects with increased size, height, and density to meet the inflated SCAG numbers, further jeopardizing our city’s DNA.

And next week’s article refutes the need for upzoning while outlining the ability to meet whatever the number of units that growth can accommodate without exceeding our infrastructure or losing our relaxed beachfront environment.

Santa Monica is a low-rise beachfront community of 94,000 residents.  Its recreation together with the arts gives identity to the city.  But Santa Monica is being asked to expand the population by 20% in the next 8 years.  Is there a city that has grown 20% in 8 years, and if so, what is the quality of life in that city?  Even though Santa Monica is the 2nd densest city on the California coast – there are no other coastal communities that were assigned more than 55% of the housing increase that we were assigned!

Every city needs a housing element, but also an overall plan that coordinates its transportation, open space, cultural and institutional sectors, commercial and residential elements in concert with each other.  And it’s critical that these activities and numbers are reasonably correct in order to determine existing and needed infrastructure.  Moreover, how can the city afford $2.9 billion dollars to build 6,000 affordable units?

In an effort to address the housing shortage, with currently 4,000 vacant apartments in Santa Monica, our city government over the past two decades has unintentionally or otherwise made a bargain with the devil as well as with developers to address this shortage.  But our housing crisis is not the amount of housing, but one of affordability, gentrification and increased homelessness.

Why upzone when existing zoning and the market can comfortably provide – if even necessary – the increase being discussed.  Increasing housing supply through deregulation of size, height, and density is nonsense – benefits only developers and land speculators.  Where will the money come from for required infrastructure and how will it affect our quality of life?  And how many affordable units will be demolished to build these 8,900 units?  Reviewing the development envelope that exists along our commercial boulevards and downtown area, it’s quite clear that increasing zoning capacity is categorically unnecessary whether we build 890 units or 8,900 units.

Upzoning has not and will not produce low-cost housing, in fact, it makes the housing crisis even worse.  In an effort to reduce costs, Vancouver upzoned density throughout the city and only exacerbated affordability.  And here in Santa Monica, the NMS sale of buildings will “pull up market values all over the city” quoting a noted commercial real estate firm.  There are no trickle-down economic benefits.  This mandate only further gentrifies our community, driving out current low-income residents.  It does not increase the supply of affordable housing, it only supports real estate speculation!  And current projections suggest both city and state population is static, if not declining.

We’ve done far too much piecemeal planning and development.  Upzoning will quickly lose our sense of community and character.  Our downtown will continue to “canyonize” !  We can’t continue to trash our environment.

And what has caused prior and recently re-elected councilmembers to come into office favoring lower density and height limits, only to later vote with the development community?  Was it the need to cover campaign debts, or future campaigns? Whatever the reason, it has not been beneficial for the community to witness the transformation.

As our country wrestles with internal divisions, so does Santa Monica. The development community, in addition to controlling Santa Monica, has now overtaken Sacramento, with the primary purpose of increasing land value.  With less restriction on land and density on coastal property, prices will escalate even more!  And 8.900 new units brings infrastructure costs and needs front and center.  The housing crisis should not become justification for real estate speculation.

Developers and Sacramento should not take over the city’s planning function.  SCAG numbers could be an ecological disaster as buildings over 3 stories can’t be net zero energy usage with current technology!

Is Santa Monica a mid-rise or a high-rise city?  Prior City Councils have focused on housing and densification, whereas residents are focused on quality of life!  But as previously mentioned, the housing crisis is one of economic inequality, not a housing shortage.  There is absolutely no need to “upzone,” but there are two basic issues to resolve – 1) affordable housing and 2) accommodating growth within density and design guidelines that retain Santa Monica’s DNA!