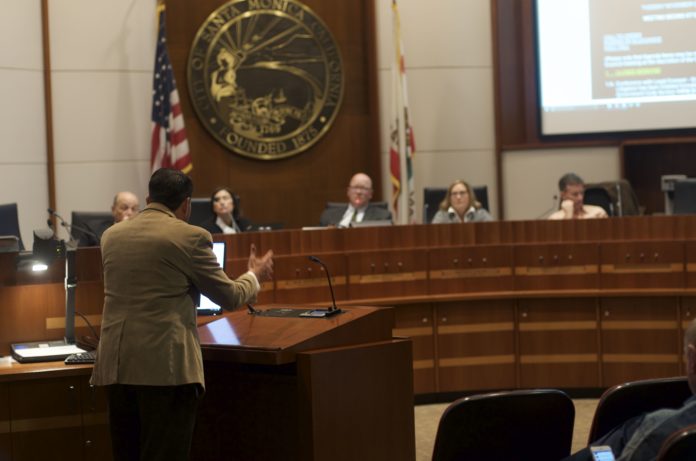 Tensions flared and and pointed accusations were raised at this week’s Santa Monica City Council meeting among lawmakers during a debate over whether Councilmember Oscar de a Torre can participate in action surrounding a voting rights case brought against the city by his wife.

In a 2019 ruling the Los Angeles Superior Court Judge ordered that all future elections for seats on the Santa Monica City Council be based on a seven-district map drawn by an expert for the plaintiffs, including a 30 percent Latino district. The City then appealed this decision.

At the January 26 Santa Monica City Council meeting, lawmakers voted on whether Councilmember Oscar de la Torre can participate in discussions and decisions relating to the case. De la Torre’s wife is plaintiff Maria Loya and until November 2020 he served on the Pico Neighborhood Association’s board.

Santa Monica Interim City Attorney George Cardona, in a staff report, recommended that the Council decide de la Torre has a Common Law conflict of interest (as opposed to a financial conflict). The City is still awaiting guidance from California’s Fair Political Practices Commission (FPCC) on the matter. According to Cardona, however, the agency will not advise on Common Law conflicts “unless they were to break from their past practice.”

De la Torre, it should be noted, said he would abide by any FPCC ruling and also any ruling from the California Attorney General.

In the end, Council voted 4-2 with one abstention to exclude de la Torre from participation in any closed session or confidential conversation concerning the CRVA lawsuit and voting on any decisions relating to the case. De la Torre and Councilmember Christine Parra voted to allow de la Torre to continue to participate in discussions and decisions relating to the case. Councilmembers Gleam Davis, Kevin McKeown and Mayor Sue Himmelrich voted to disqualify de la Torre from these discussions. Councilmember Phil Brock cast a vote of abstention.

The matter, however, was not decided until over an hour and a half of heated debate on the issue.

Towards the beginning of the discussion, a heated exchange played out among de la Torre, the Interim City Attorney Cardona and Mayor Sue Himmelrich.

“I sat through the trial and made occasional appearances. The primary appearances were made by outside counsel who was retained,” Cardona answered.

“Did you advise the previous City Council in the course of that case to not engage in any meaningful settlement discussions and instead pay tens of millions of dollars to your friends at Gibson, Dunn & Crutcher [the law firm representing the City]? de la Torre asked.

“I can’t answer that question. That would breach privilege…” Cardona began to answer before Mayor Himmelrich jumped into the conversation.

“I am going to object. George [Cardona], you shouldn’t answer these questions. Oscar [de la Torre], what we have instructed the City Attorney to do, until it is determined that you don’t have a conflict, is not something you are privy to. In fact, I am offended that you are asking that question. Oscar, we are in a public meeting. What we tell our attorneys to do about a settlement is as private as what you tell your attorneys to do,” Himmelrich said.

Towards the end of the back and forth, Councilmember Phil Brock–who abstained from the vote–spoke about the tone of the discussion.

“I am frustrated by the tone of this meeting and the fact that we are going so long on this disruptive issue.” Brock said. “I am concerned about how our Council is perceived from the outside.”

Tensions Carry Over to Council’s Discussion and Vote

After the questioning of Cardona and a public comment period–in which most of the callers supported allowing de la Torre to participate in the discussions surrounding the case–Councilmembers shared their opinions on the matter before voting.

Mayor Himmelrich compared the situation to the football game in explaining why she believed de la Torre should be excluded from the discussions.

“It’s like a football game,” Himmelich said. “If I am going into a huddle to my last charge towards the goal line, I am not inviting the coach for the other team into my strategy session about the play I am about to call. It just not make sense. Similarly, I would never be asking Maria Loya or PNA to attend their sessions with their lawyer Mr. [Kevin] Shenkman to discuss what their strategy is going to be on this case where they are opponents. And we cannot look at this like the litigation is identical to the issue of district elections. They are separate issues. We can discuss district elections, what they should look like, whether we should have them, whether we need other charter reform with Oscar de la Torre in the room, you know at the table, and discussing all of that.”

Councilmember Gleam Davis shared a similar opinion to her colleague in her remarks explaining her eventual vote to disqualify de la Torre from discussions.

“This is not about Oscar’s opinions. This is not about Coucilmember de la Torre’s bias,” Davis said. “It has to do with the very clear fact that Mr. de la Torre was in fact part of the group, head of the group, that decided to sue the City. That he is married to the individually named plaintiff in the lawsuit, and that those facts in and of themselves create a legal, a Common Law, of legal conflict of interest.”

In response to these points, de la Torre argued that his connection to the case is no different than other Councilmembers participating in areas that they are passionate about.

The Councilmember, who was elected this past November, proceeded to accuse the City of “fighting for white supremacy” by challenging the case in court.

“The City chose to pay the most expensive lawyers they could find, Gibson, Dunn & Crutcher, to attack the California Voting Rights Act and the important minority voting rights that it protects. The City also refused to let the taxpayers of Santa Monica know how much of their taxes have been paid to Gibson, Dunn & Crutcher, I think we all know that number is very high. Most certainly in the tens of millions and that is why as an elected official, I want to be involved to stop the blood letting. The residents want us to stop wasting taxpayer dollars and that is my fiduciary responsibility to do that,” de la Torre said. “That money has been spent to protect the seats of Councilmembers. In the process that money was spent fighting white supremacy. Now you may think, ‘Oscar has lost his mind. Accusing the famously liberal City of Santa Monica of fighting for white supremacy.’ But that is exactly what it did and it still is doing by attacking the CRVA here in Santa Monica and jeopardizing the act statewide.”

Following these pointed remarks, Interim City Manager Lane Dilg (the former City Attorney) took aim at some of the comments that were raised, calling them “outrageous”.

“I think some of the comments made tonight were outrageous. I want to say in this particular moment in our country’s history we have seen the need to verify information. We have seen the use of baseless allegations and accusations printed in sources that do not take time to verify,” Dilg said. “I am a constitutional lawyer and a civil rights lawyer. I have worked for the ACLU as a civil rights lawyer. I am not seeking $22 million from the city and I want to be very clear that this city and all of our communities deserve good public servants and continued attacks on public servants does not move anyone forward.”