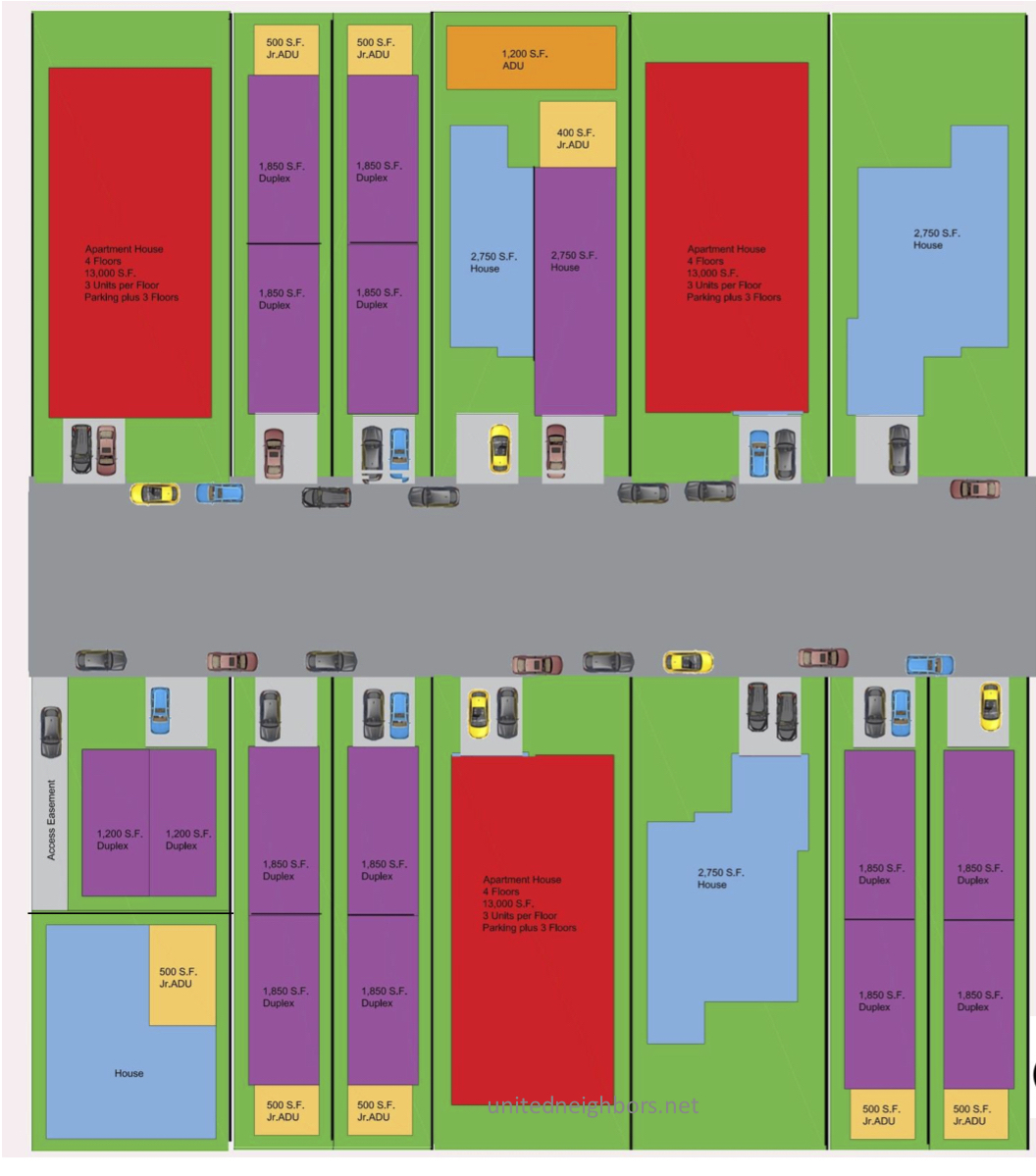 Like zombies that refuse to die, every year Scott Weiner, the California Senator from San Francisco, comes up with new bills to wreck our City and State. His latest incarnations are SB 9 and SB10. Two bills, that if passed, are designed to purposefully destroy single family homes in our City’s R-1 districts. SB 9 is carefully camouflaged as a “duplex bill” with the seemingly innocent purpose of allowing R-1 lots to be split in two and then developed. In reality However, these bills would allow 4 to 8 times more housing on each R1 lot destroying the quality of the entire neighborhood. Furthermore, SB10 allows 10 units on any residential lot.

These drawings, prepared for United Neighbors by  architect Jeffrey Kalban show how R-1 districts would be destroyed by SB 9 and SB10. On the first drawing shows what is already CURRENTLY allowed on a typical Santa Monica 50’x150’ R-1 lot; A single family residence(blue) say 2750 sq feet with a small detached Accessory Dwelling Unit (ADU orange) of say 625 sq feet (could be up to 1200 sq ft) and an attached  Junior ADU (yellow) say 400 sq ft which might be the converted garage. This totals a nominal 3375 sq ft.

The second drawing shows what SB 9 forces Cities to allow. First the lot gets split into two mandatory equal sized lots to guarantee the demolition of the existing main house. Then on each of the two lots a duplex can be placed plus a junior ADU (500 sq ft) by right and,  if allowed by the City (not mandated by SB 9), also a full ADU (1200 sq ft). This could total 8200 sq ft with 4’ sideyard setbacks ( compared to the current normal 7.5’ ) and  only a 4’ rear setback compared to the 25’ currently required for the main R-1 building.Notice the complete lot buildout with no room for trees, patios, usable back yards etc. and most importantly buildings so close together there’s no privacy for the adjacent neighbors.

Another damage SB9 does, apart from encouraging the unstoppable demolition of thousands of beautiful Santa Monica homes, is that NO  parking is required in most of Santa Monica since virtually the entire City is within 1/2 mile of a major transit stop. So you can imagine what the curbside parking overload is going to be. In the front of the formerly 50’ wide lot there is only room for 2 parallel parked cars so these “duplex” projects with their potential 12 to 16 cars (2 cars per unit is not unusual for couples living in the R-1 District)  would spark vicious parking wars.  Developers will initially dump this parking overload on the street, but because these will still be multimillion dollar homes, in spite of its advocates’ bogus claim that this is affordable housing, each lot will want its own private  parking. At the end, each 25’ wide lot will want a 20’ wide driveway so  there will be virtually NO street parking left at all.

While the lot could also be split in half the other direction it would require a walkway or driveway easement (absent a rear alley)   so the building on the rear half could reach the street. While this would lead to better appearing buildings (not 17’  wide skinny houses), they would be slightly smaller so less likely to be developed.

After doing this much damage and destroying the R-1 zone, Weiner then wheels out SB10. This would allow a simple majority of 4 Council persons to override any existing local zoning and permit a  building, by right of 10 units, plus 2 ADUs and 2 junior ADUs on ANY residentially zoned parcel of any size including the R-1 zone. Particularly evil is that SB10 also gives this  same council majority statutory the right to  overturn  ANY locally voted initiative, for example the Airport to Park proposition LC. In other words as soon as a pro developer majority of  Council persons get elected, the residents are powerless to effect any control over their City. SB10 has no height limits, no area limits, nor of course any parking or affordability requirements.

The development of such SB10 buildings in the current R-1 zone would probably be 4 story buildings (shown in red) of about 13000 square feet with the whole first floor for parking about 10 cars. Needless to say a 10 unit apartment building in Santa Monica would need parking for about 20 cars.. This effectively changes the entire R-1 district to something denser than even our City’s R-4  districts.

Naturally SB9 and SB10 precludes the City from charging the speculators ANY fees for the increased demand for water, gas, power, cable TV or phone. Obviously there is no protection of the solar rights of adjacent residences who have or might want to have solar hot water or electrical panels. Likewise there is no protection for any of the R-1 trees which provide typically about 80% of the urban tree canopy.  Even more egregious is that  this massive rezoning can be done with no EIR (environmental impact report) and no consideration for its impact on all basic city services: fire, police, schools, and libraries. Finally SB 9 guarantees there is no way to meet our 2023 water self sufficiency goals.

And of course there is no requirement in SB9 or SB10 that these developments be affordable in any way giving proof they are only about increasing speculative land values and profits for developers.

In the last two plans we can see the difference between  the existing R-1 fabric and its appearance after the impact of SB9 and SB10. Needless to say these bills would destroy our R-1 zones with absolutely no increase in affordability but would ruin the quality of the neighborhoods and burden the existing residents of the entire City with enormous infrastructure costs that developers would happily avoid. SB9 and 10 are really a “no land speculator left behind” program. The R-1 density goals are already being met, more cost effectively, by the current laws allowing ADUs: no additional legislation is needed. The rest of the City’s density could more than amply be met by developing the existing boulevard zoning capacity.

Fortunately our City Council has taken a position against SB9 and SB10 as currently written. Unfortunately, there is no way that these can be re written to anyone’s benefit except for land speculators. Today R1 residents have no idea this catastrophe is headed toward their peaceful homes. Let your council persons and your state representatives know that SB9 and 10 are Trojan horses that should be killed before they enter and ruin our City.

Thanks to Jeffrey Kablan and Maria Pavlou Kablan for the graphics

"SB9 and 10 are Trojan horses that should be killed before they enter and ruin our City," writes Mario Fonda-Bonardi in the latest SMa.r.t. Column. Graphics: Jeffrey Kablan and Maria Pavlou Kablan.
Crime

"SB9 and 10 are Trojan horses that should be killed before they enter and ruin our City," writes Mario Fonda-Bonardi in the latest SMa.r.t. Column. Graphics: Jeffrey Kablan and Maria Pavlou Kablan.
Westside Wellness

"SB9 and 10 are Trojan horses that should be killed before they enter and ruin our City," writes Mario Fonda-Bonardi in the latest SMa.r.t. Column. Graphics: Jeffrey Kablan and Maria Pavlou Kablan.
Transportation