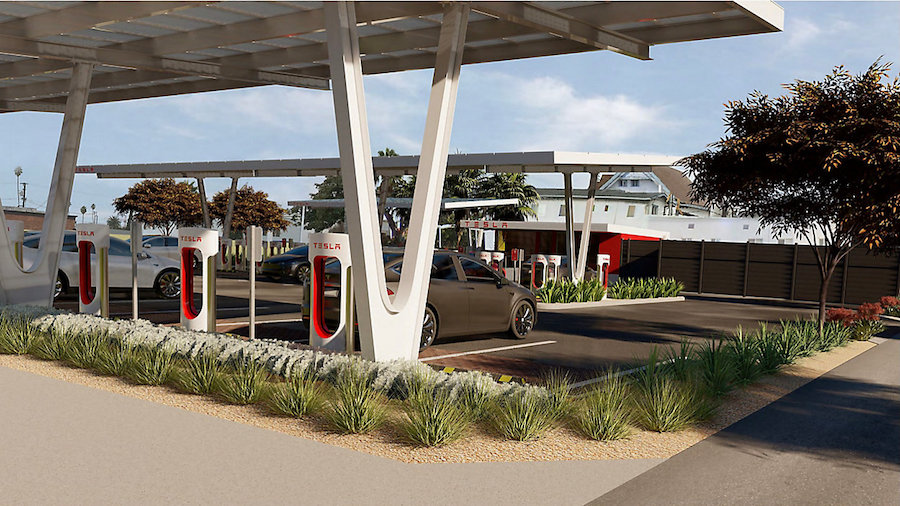 Charging station would provide power to over 50 vehicles

Located by the alley near 14th Street and Santa Monica Boulevard, Musk plans for the 62- stall charging station to also feature a retro diner and screen for movies.

Despite Musk’s hopes, those details have yet to be included in the latest plans submitted to council. In late March, Council voted to exempt the plans from a moratorium on commercial development. Before then, the project had been put on hold. According to the Santa Monica Lookout, the timeline for the project has had a lot of stops and starts. In early March, Council voted 5 to 2 to support a Conditional Use Permit (CUP) approved by the Planning Commission. This plan had details including restrooms, support equipment and solar canopies on the site.

The Tesla station was just one of several projects removed from the Interim Zoning Ordinance (IZO) hold list. Council member Kevin McKeown gave the go ahead to staff on Tuesday March 30, following the discovery that the Station would not be able to include housing as defined by the Suitable Sites Inventory for the Housing Element. Planning staff had originally envisioned the site holding 70 residential units split between the East and West lots. This potential housing could have also contributed to Santa Monica’s need for affordable housing. The city has a mandate to construct over 6,000 new affordable housing units within the next eight years.

The final approval for the motion for the station will come before Council on April 13.