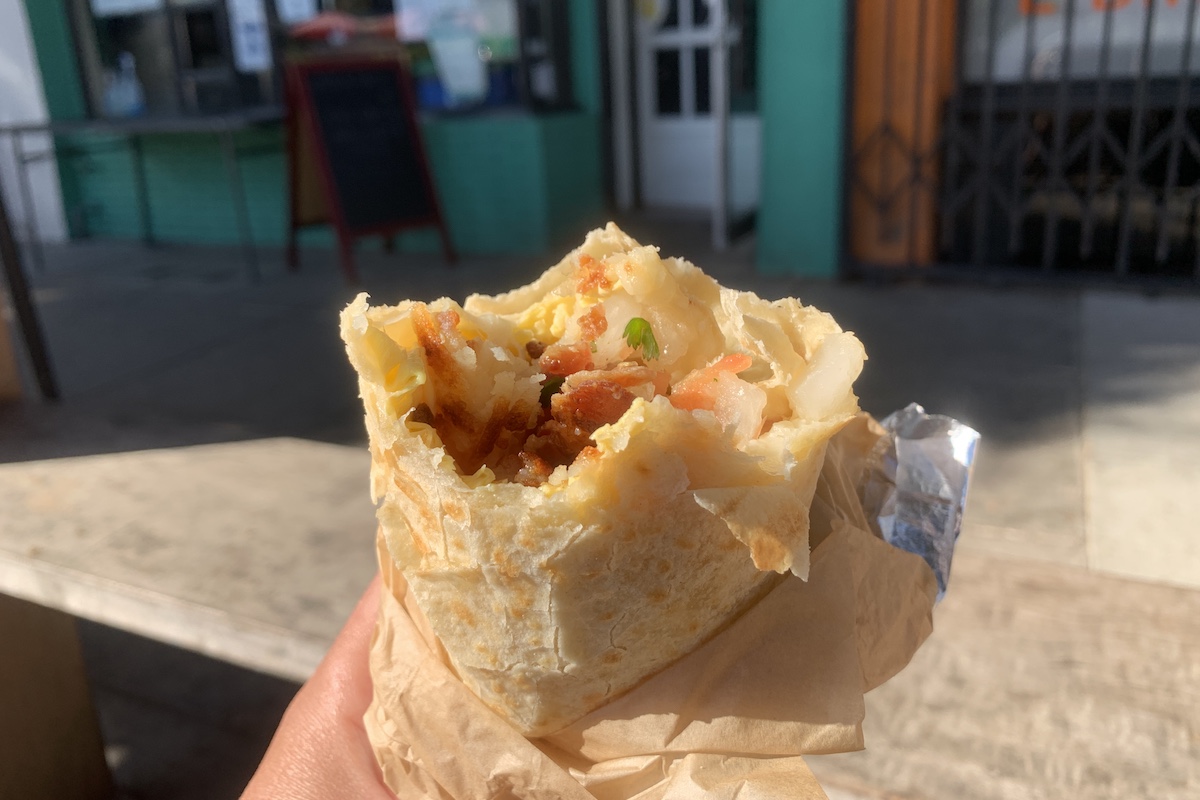 A hole in the wall rolls up one of the best breakfast burritos on the Westside.

Bacon is the first thing I tasted when biting into a bacon breakfast burrito ($10 with tip) at Holy Guacamole on Main Street in Santa Monica. This is a testament to the construction of the burrito: from end to end there are no dull patches. Cheese, salsa, hash browns and eggs join the party in the second bite and stay until the end. There is nothing fancy about this breakfast burrito, but each component is done perfectly so let’s break it down.

Starting on the outside we have the tortilla which contributes in two important ways. To begin with, it is folded in a manner that stays intact from start to finish and without any bites that are just tortilla. Second, the tortilla spends some time on the griddle, giving the burrito a great crunch.

Let’s talk about the eggs next. In many ways, the eggs are the weakest part of the burrito and this is a good thing. Many breakfast burritos suffer, in my opinion, because the eggs take up too much volume and dominate the flavor palette. At Holy Guacamole, the eggs take a back seat, acting as a platform for the other components to come through.

Next we get to the bacon, which there is a lot of. Two things stand out regarding the bacon in this burrito. First it is cooked to perfection–crunchy yet not burnt–providing both taste and texture to the burrito. Second, it is chopped as opposed to diced or included as a whole slice. When bacon is diced, it loses that great crunch and also tends to take over the flavor profile of every bite. When whole strips of bacon are included in a breakfast burrito, there are some inconsistent bites where no bacon is present. Chopped, however, the bacon retains the crunch while being distributed evenly.

Another consistent throughout the burrito is cheese. Again, like everything else, it is distributed evenly, not clumped in sections. More importantly, it is melted yet not runny. Nobody likes biting into cold cheese or by contrast having greasy cheese fall out of the bottom of the burrito.

Finally we get to the salsa. The pico de gallo inside the burrito adds a great contrast to the richness of the warm eggs, bacon, potatoes and cheese. And there is a lot of pico de gallo, making this a surprisingly photogenic breakfast burrito. There is also a hot salsa verde and a mild salsa roja for dipping purposes. The roja is okay, but the verde packs a punch while not overwhelming one’s taste buds.