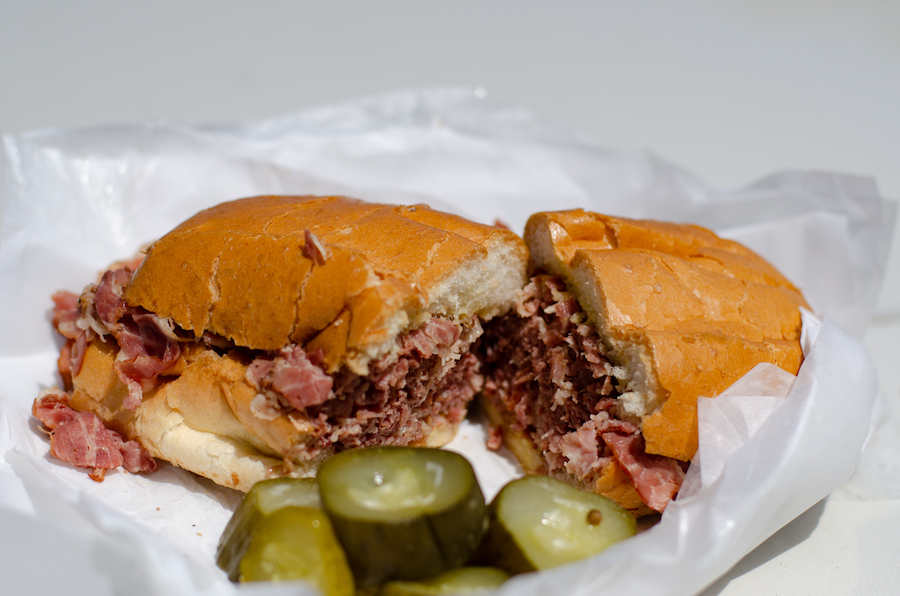 While there are far better sandwiches in Los Angeles, a longtime restaurant serves up a pastrami sandwich that can almost be considered an essential Westside culinary item.

Johnnie’s Pastrami, located at 4017 Sepulveda Blvd in Culver City, is often overlooked due to its proximity to LA-institution Tito’s Tacos. Make no mistake however: Johnnie’s is every bit as essential to the Westside dining scene as Tito’s is.

This review with focus only on Johnnie’s signature item: a French dip pastrami sandwich. Checking in at $14.95, this is not a cheap sandwich, but as I found out later can easily feed two people. The sandwich comes with sliced pickles on the side, which I ordered extra of for 35 cents. Note that Johnnie’s is cash-only, even during the pandemic. In addition, it should be noted that there are currently no seating options available at the restaurant as the patio remains closed.

Waiting for my order, I was able to observe the sandwich being made. This was an incredibly simple operation that consisted of stuffing a mustarded and dipped French roll with heaps of steaming-hot pastrami. Less than five minutes later my sandwich was ready, an impressive speed considering I was there during lunch rush.

The first bite and every subsequent bite thereafter was dominated by meat. I cannot empathize enough how much pastrami is on this sandwich, held together surprisingly well by the soft French roll. While this sandwich is stacked with meat, the thinly sliced pastrami is pretty subtle and on the verge of bland, but in a good way. If the meat was any more seasoned, it would be too salty and overpowering considering its quantity.

I came into the meal pretty hungry, yet despite this I could not finish the whole sandwich and took the rest home. Two people can easily share it for lunch, which makes the $14.95 price tag seem more reasonable. And also pastrami sandwiches are never cheap in general, so one should not be discouraged by the cost. Johnnie’s also offers the option of a half sandwich for $9.75, which I will probably get on my next solo trip to the restaurant.

There are much better pastrami sandwiches in Los Angeles. Langer’s–arguably the best pastrami in the U.S.– and Wexler’s Deli, just to name a few. There are also better French dip sandwiches in Philippe’s and Cole’s. So why is Johnnie’s French dip pastrami an almost essential Westside sandwich? For starters, it is one of the better pastrami sandwiches on the Westside. Second, it fills the culinary niche of a no-frills, hot, filling sandwich made in front of your eyes. Finally, it’s a great example of simple food, something I am a sucker for. Just bread, meat, mustard and broth coming together for a lunch that will hit the spot for any carnivore with an appetite.

While overshadowed by the fame of Tito’s, I think Johnnie’s french dip pastrami is arguably a better food item than a hard shell taco at Tito’s. I may catch some heat from this, but to me Tito’s is overpriced mediocre food. Johnnie’s french dip pastrami, by contrast, is a fairly priced sandwich that may not knock your socks off but is still a very solid offering. Essential? Not quite, but close and worth a visit to next time you are in the area.

Ring in the Year of the Rabbit with a 90-Foot Lightshow at Pacific Park!