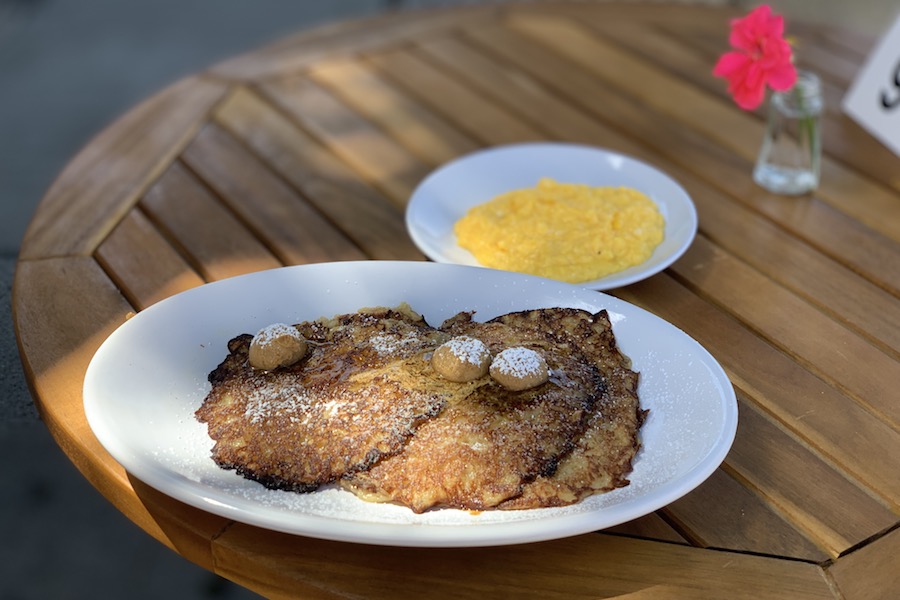 A new breakfast spot on Montana Avenue in Santa Monica serves up griddle cakes that even a self-professed pancake-hater can’t help but love.

Popular West Hollywood restaurant Breakfast by Salt’s Cure opened at 714 Montana Avenue last month, the small space on the south side of the street was formerly home to Italian restaurant Osteria Bigoli that closed at the beginning of the pandemic. In a bold move, the restaurant has opened up just feet away from Marmalade, another breakfast spot.

The menu is straightforward at Breakfast by Salt’s Cure: a handful of griddle cake varieties, eggs, breakfast meats, some greenery, a sandwich and beverages. For a brunch this week, I ordered the OG griddle cakes (served with cinnamon butter) and a side of soft-scrambled eggs and waited outside at a table for my food.

Five-minutes later, breakfast had been served and darn it looked good, and I soon found out it tasted just as good. I started with the soft-scrambled eggs, since cold eggs are an abomination. While the restaurant specializes in griddle cakes, these soft-scrambled eggs were a work of culinary art. Rich, warm, creamy yet not runny, I ate the eggs in under a minute and got to dig into the stack of griddle cakes while they were still piping hot.

Here is where I should probably announce that I normally do not like pancakes, griddle cakes or waffles. In most cases I find without heaps up butter and syrup they taste like nothing. Breakfast by Salt’s Cure, however, serves up griddle cakes that had me wanting more.

The outside is crispy and caramelized. The inside is moist and flavorful. Each griddle cake is pretty thin but these, in my opinion, are meant to be eaten as a stack as opposed to individually. The taste itself is balanced between sweet (thanks to the batter and powdered sugar), savory (thanks to the cinnamon butter) and slightly bitter (thanks to the use of oatmeal in the mix). One thing missing from this description is syrup. As the restaurant writes on its website, however, these griddle cakes do not need it, a sentiment I wholeheartedly agree with.

“Sorry not sorry, but at Breakfast by Salt’s Cure we do not offer syrup with our Griddle Cakes. Why? You don’t need it. The batter itself has the perfect amount of sweetness you seek, and when topped with our Sea Salt Butter and a padding of powdered sugar, you are good to go. Next question,” they write.

The total cost of my breakfast with tip and tax with $14, which may seem steep for just pancakes and eggs. Given that Breakfast by Salt’s Cure is on the posh Montana Avenue and also serves up some elite griddle cakes, however, this is a justifiable price in my opinion.

So how do I rate the meal? Earlier this year, when reviewing the The OMG sandwich from Heroic Italian in Santa Monica, I wrote “When gauging a restaurant’s rating, I like to tend to reserve ratings of 8 and above for places that I would take a friend from out of town to.” The griddle cakes from Breakfast by Salt’s Cure, perfectly-cooked eggs, combined with the fact that it’s within walking distance of my home makes this restaurant definitely worth taking a visiting friend to. Or just myself, as I will surely be returning again.