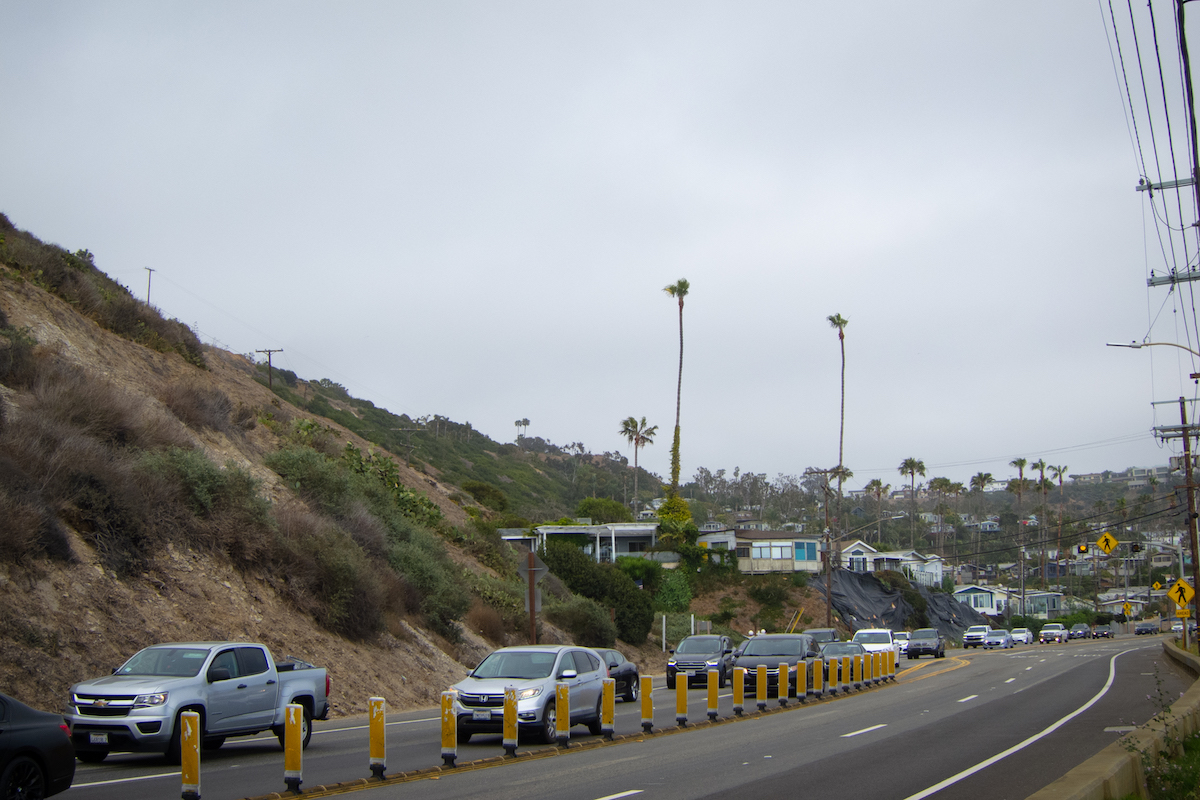 “In March, our team found four sites containing combustible materials along our hillsides,” PPTFH Chair Sharon Kilbride wrote in the organization’s March-April newsletter. “Two of the sites were in the lower Via bluffs in the dry brush. Hilton, a homeless man and convicted arsonist, had constructed an elaborate fire pit. Hilton has been warned several times not to enter the restricted fire area. Last year alone he started three small spot fires that were extinguished by LAFD. Yet he continues to build his bizarre fire pits made of stones, coals, ceramic tiles and lumber, always in the same location, and marked by his signature red paint.”

The Los Angeles Police Department (LAPD) told the Santa Monica Mirror that it was aware of the individual, who is currently on probation relating to a Santa Monica arson case.

“We are aware of a male that you referenced in your email. West LA has two officers and a Senior Lead Officer that work specifically in the Palisades. These officers monitor the hills for fire concerns and check the area [where] the male you described frequents daily,” wrote Captain Ryan Whiteman of the LAPD’s West Los Angeles Patrol Division. “The male is on probation for arson from a case in Santa Monica. Currently, he is in good standing with the County Department of Probation.”

The Los Angeles County Department of Probation could not immediately be reached for comment.

According to the LAFD Arson division, the man was not the target of any open investigations as of May 4, 2021.

“Their team is also aware of the male and history,” Whiteman said. “Our officers work in partnership with Pacific Palisades Task Force to provide the best service to our community members experiencing homelessness. The challenge is those who are service resistant.”

The PPTFH also noted that Hilton has been resistant to service and outreach in the past and may suffer from a mental illness.

“Hilton appears to suffer from some form of mental illness and always refuses services. LAPD beach detail and First Responder volunteers monitor this area routinely and only find his newly constructed fire pits. He always vanishes before the team can apprehend him. In the month of March, our team cleaned and dismantled his newly created fire pits on three different occasions. Our team is challenged by individuals suffering from mental illness. It is particularly concerning when persons such as Hilton exhibit dangerous behavior that threatens the safety of our community,” the PPTFH wrote.

According to the PPTFH, most of the 47 homeless individuals their First Responder volunteers engaged in March with were concentrated in the area from Santa Monica Canyon to Temescal Canyon, including three people camping in fire-prone hillside areas.

The PPTFH was formed in 2014 as an independent group of community volunteers committed to compassionately addressing the serious issues associated with homelessness in the Palisades. The organization, relying on community support, funds a full-time, professional outreach team that works daily in Pacific Palisades to engage homeless individuals and connect them with the essential services they need. Visit https://www.pptfh.org/ for more information.