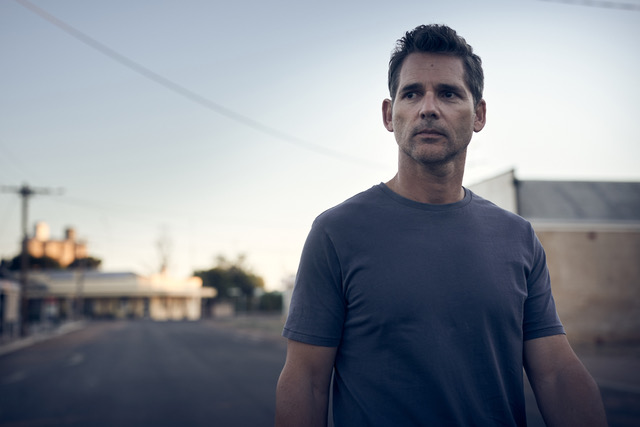 Australian bred Eric Bana is a cinematic treasure, racking up a series of powerful performances in an array of films too many to list. Some of my personal favorites are Black Hawk Down, Hulk, Troy, Munich, The Other Boleyn Girl, Star Trek, and the fascinating The Time Traveler’s Wife. Add to his body of unforgettable performances is his latest film The Dry, in which he delivers yet another thoughtful, methodical characterization, quietly simmering with emotion and guaranteed to keep you guessing until the unpredictable ending.

Based on the best-selling novel by Jane Harper, Robert Connolly powerfully directs this noir film from the screenplay co-written with Harry Cripps. This riveting, deliberately slow-moving moody story begins with a shot of the exterior of a house on the outskirts of Kiewarra, a fictional town in Australia’s outback. We hear the sound of a baby crying and slowly, ever so slowly Stefan Duscio’s excellent cinematography takes us into the interior of this blood-splattered home where Luke Hadler, (Martin Dingle Wall) his wife Karen, (Rosanna Lockhart) and young son are dead. The baby was spared. The presumption is that it was a double murder/suicide. The deceased couple’s childhood friend, now Federal Agent Aaron Falk (Eric Bana,) is returning to his hometown after 20 years to attend the funeral. As he drives along, the camera captures the endless miles of arid, drought infected land catapulting him back to his teenage days swimming in the river with his friends. Joe Klocek plays young Aaron and his girlfriend, 17-year-old Ellie Deacon, is played by Bebe Bettencourt, whose drowning still remains a mystery. Although never proven, both young Aaron and young Luke (Sam Corlett,) who alibied for each other, were suspects in her death causing the Falk family to move to Melbourne. On his return for Luke’s funeral, Ellie’s father, Mal (William Zappa) once again accuses Aaron of the murder of his daughter. Our protagonist becomes more and more convinced that Luke did not murder his family and decides to stay on after the funeral to try to unofficially solve both murders which he thinks might be connected. Since our visiting Federal Agent doesn’t have any jurisdiction, he works with the local law enforcement officer Sergeant Raco, effectively played by Keir O’Donnell, who is just as anxious as his friend to solve the current murder and maybe the past crime as well. He was devastated by the shocking murder scene and, although he has no proof, feels that something is not quite right – and maybe, just maybe there is a hidden clue that hasn’t revealed itself. Another of Aaron’s childhood friends is Gretchen, nicely portrayed by Genevieve O’Reilly, with her younger self played by Claude Scott-Mitchell. She spends time with Aaron who is trying to get the bottom of this intriguing murder mystery. In one of the fascinating flashbacks, he is putting a bracelet on Ellie’s wrist which accidently falls into a small hole in the brush. He retrieves it and affixes it to her wrist. Returning to that scene, Aaron discovers something hidden in that same spot which gives him a clue as to what might have happened to her. While in town, our hero visits the local school he attended which is now in the hands of principal Scott (John Polson) who is harried, but friendly, and seemingly happy to see Aaron. Ultimately, he not who he appears to be along with another of the townspeople.

Director Connolly weaves a giant tapestry with inter-related threads, carefully and slowly pulling each strand through until the plot and subplots strands fit perfectly into the right place, eventually creating a picture of the truth. Editors Alexandre de Franceschi and Nick Meyers, meticulously cut the film so that each thread lands in exactly the right place to further the suspense and possible motives behind each of the murders. The director assembled a talented ensemble of supporting cast members including, Luke Hadler’s parents Gerry (Bruce Spence) and Barb (Julia Blake,) Scott’s wife Sandra (Renne Lim,) James Frecheville (Jamie Sullivan,) Matt Nable (Grant) and Daniel Frederiksen as Dr. Leigh. So, whether you see this film in theaters that are now happily open for business or stream it in the comfort of your living room, grab a bag of popcorn, sit back, and watch this exciting, unique drama unfold.