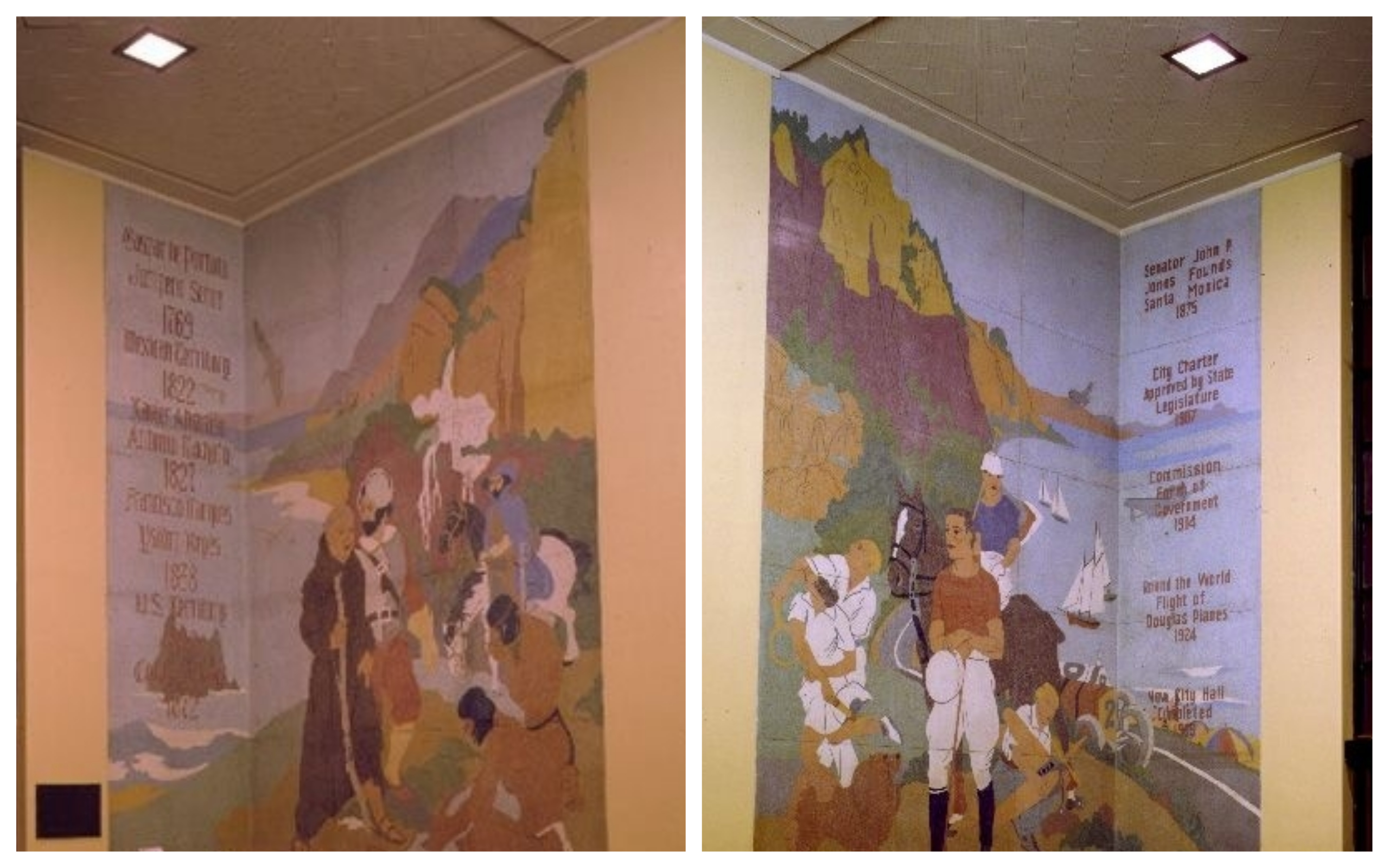 A mural is being covered over inside the historic landmark Santa Monica City Hall building. This decision follows upon a 6–1 vote by city council members on April 11 in favor of obscuring a work of art some have deemed racist, offensive and illustrative of white supremacy. At a point in time when the country as a whole is struggling with—and fighting over—the fundamental idea of truth and its widespread abuse, Santa Monica’s actions are a bellwether of our Nation’s cultural maturity and intellectual integrity. Will we be found wanting?

The mural, History of Santa Monica, was created by Stanton Macdonald-Wright (1890–1973). Macdonald-Wright grew up in Santa Monica, eventually joining a wave of American artists who went to study art in Paris in the years before WWI. Today, his work is on view in major museums throughout the world. During the 1920s and 30s, every artist and art aficionado in the vicinity of Los Angeles knew of him. Macdonald-Wright was a skillful painter, persuasive speaker, and indefatigable advocate of modernism. He was, too, a person with his own faults and foibles.

During the Great Depression, Macdonald-Wright was tapped to head the Federal Art Project (FAP) for Southern California (part of the alphabet soup of the Works Progress Administration, the WPA). Murals formed an integral part of FAP production across the country, including in Southern California. Wanting murals made under his direction to be unique, Macdonald-Wright updated ancient classical mosaic with the invention of Petrachrome, a process that involved colored stone and concrete. He disallowed murals with explicit political content, believing that murals of epic size with an audience stretching into the far future should be free from topical themes.

It was Macdonald-Wright who designed the History of Santa Monica mural that is now about to be covered over by order of the Santa Monica City Council. The mural’s subject matter is an idealized visual narrative of the naming of Santa Monica. According to legend, Father Juan Crespi, one of the diarists of the Portola expedition of 1769, arrived at the location of the springs which were shown to them by Native Americans. Emotionally moved, Father Crespi said that the streams of water reminded him of the tears of Saint Monica, and this utterance gave birth to the name of city. The springs still exist today and are tended by descendants of Tongva/Gabrieleno Native Americans on the grounds of University High School.

This mural is now decried as racist. To arrive at this view, one must look at the mural and make the following interpretation: The Native Americans at the foreground of the mural are kneeling in servility to the Europeans. Full stop. Based on this interpretation, City Councilman Oscar de la Torre has said that the mural is “a blatant symbol of colonialism and white supremacy, akin to Confederate monuments across the United States.”

The problem here is that de la Torre’s interpretation is false.

Let us look closely at the Native Americans depicted to understand why. First, the only way for a human body, without a cup of any kind, to drink from a spring on ground is to kneel down to where the water is. Which is exactly what one of the Native Americans in this mural does. Indeed, this figure does not look at the Europeans, nor do they look at him. And, this observation is key: The Native American in front of and next to the kneeling figure is sitting cross-legged! Is this the position of one paying homage to a superior? If one figure was kneeling in homage, why not both? The answer: Because neither is.

Also key: Father Crespi and the Conquistador next to him are both seen walking. Imagine what logic dictates should happen in the next moment—they both walk right into the stream and bump into the Native Americans. Often in murals, the actors depicted share the same overall space but are meant to be understood as being in their own frame, or “cell,” they are not connected to each other by logic, but by the larger story being told. This explains why the neither pair seems to be aware of each other.

The History of Santa Monica’s central message, that all’s well with the world, is very nearly pollyannish. Macdonald-Wright would have agreed. He knew that a viewer may see this mural only a few times in life, if that, and it was his desire that this experience of art be memorable in scale, color and energy, wrapped around a positive spin on Santa Monica’s history, and a spin it was. He knew this.

That knowledge does not make the History of Santa Monica mural racist.

Correctly understanding the History of Santa Monica teaches us a lot. It teaches that there is far more to an image than meets the eye. It teaches that art may function very much like advertising, selling the public on a product, and that product in this case is the City of Santa Monica. That feeling may swell to suggest that art may function as propaganda (a big step up from advertising), and, indeed, it very often does. Once a viewer learns this, it is very hard to look at Presidential portraits, for example, in the same manner as before. Or any art, from any time.

And there is a very powerful reason for art to often function in ways similar to propaganda: Art, from its very beginnings, celebrates what societies value. Gothic Cathedrals gave architectural monumentality to faith. The pyramids, likewise, provided the mathematical grandeur and scale appropriate to the pharaoh. A bride dresses with well-considered elegance for her wedding. A brightly-colored birthday cake is topped with candles, a blazing red Camaro is decorated with painted flames. Art is intimately tied to status: The more important is a person, place or thing, the more a society works to make it special.

The WPA was a heroic effort to put Americans back to work during the Great Depression. The FAP gave American artists the opportunity to express their feelings and what came forth was extraordinarily varied in theme and style. But this place, America, was a constant subject. Artists rendered America over and over as expansive, endowed with countless riches, and wide open to possibility. Romantic? Certainly. But the art nonetheless routinely made clear what the country valued, and that was America itself as a place and a political possibility.

The History of Santa Monica mural is one of these works of art. A single image cannot hope to give a detailed history of anything, and that is not its purpose. The History of Santa Monica mural, with all of its calculated purity, proclaims that this is a good place, and that the people in it are good, including the Conquistador, the priest, and the Native Americans. The mural does not detail atrocities in the way of Picasso’s Guernica, but even in that masterpiece, highlighting the agonies of war serves to point toward what we value—peace. American art would have its own versions of Guernica soon enough.

What is happening right now in the City of Santa Monica is not an insignificant issue nor one that ends at the city’s borders. Before we cover our cultural landmarks, and the History of Santa Monica is one, we must study them closely, and understand, inasmuch as we can, what it is we will lose. In the case of this mural, the city and our country would lose a memorable example of art made at a time when a threatened world reached to find its better selves. Members of the City Council of the City of Santa Monica need to revisit the decision they have made not in terms of the politically expedient, but rather by the light of art’s most enduring purpose—to praise the best of life.