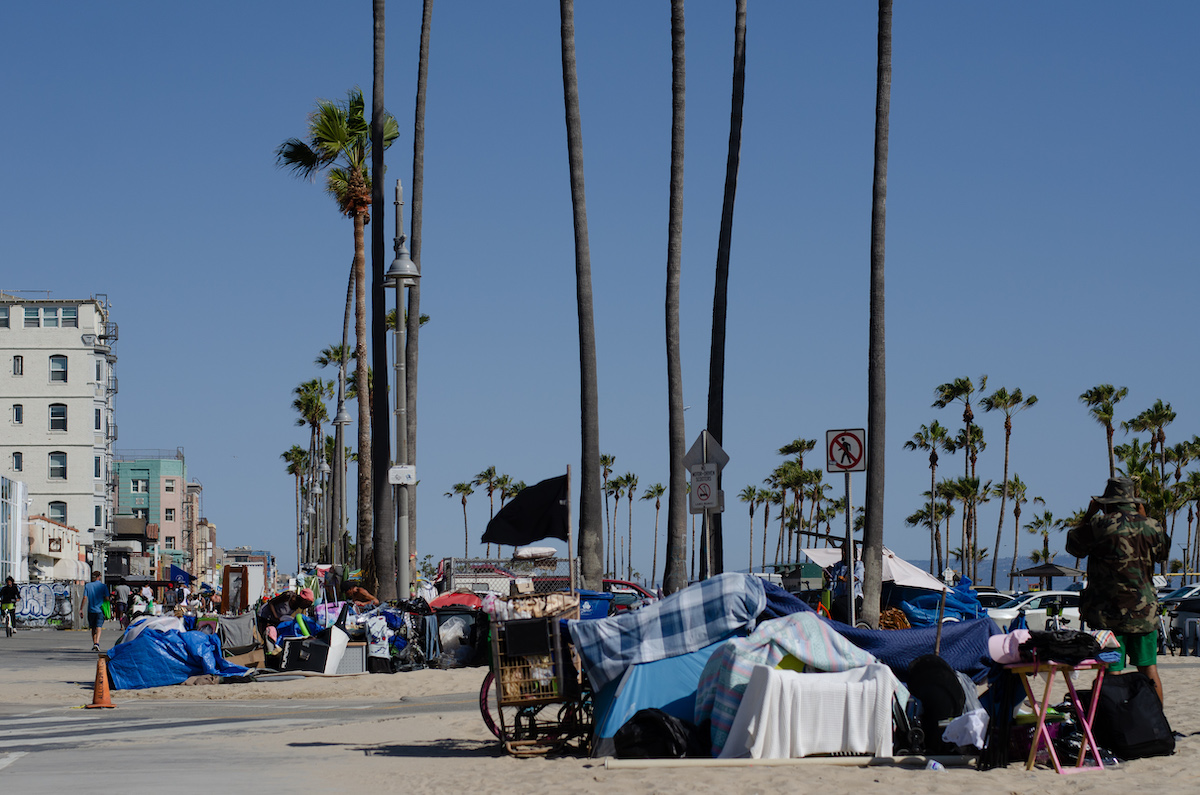 Plan to clear Boardwalk by Fourth of July met with applause, condemnation

Los Angeles County Sheriff Alex Villanueva’s plan to clear encampments on Ocean Front Walk by the Fourth of July has been met with markedly different reactions from Venice organizations and stakeholders.

Last Monday Villanueva visited the Boardwalk to announce a plan to clear encampments there by Fourth of July. In his remarks, Villanueva took aim at City of Los Angeles officials, blaming them for the prevalence of encampments in the area.

A day after Villanueva made these remarks, LASD’s Homeless Outreach Services Team came to the Venice Boardwalk to start the process of clearing encampments and connecting homeless individuals to housing. LASD Lieutenant Geff Deedrick, the head of HOST, told NBC 4 that cleaning Boardwalk encampments by July 4 is a goal, but not a deadline, and that it could take much longer.

The Boardwalk falls under Los Angeles Police Department (LAPD) jurisdiction, but the Department said in a statement to the Associated Press that it supports Villanueva’s plans and is willing to work with partner agencies to improve safety and support for the homeless community.

“The Los Angeles Police Department is committed to working with all of our public safety partner agencies and elected officials to improve the safety of our communities,” the LAPD said,” Including efforts to increase outreach and provide needed housing and supportive services in the Venice Beach community and elsewhere.”

On June 10 a group of seven Venice organizations released a joint statement pushing back against Villanueva’s actions.

“Time and time again, this approach has proven to fail in Los Angeles, and cause harm to people already dealing with crisis, trauma, and the extreme lack of affordable housing across our region and especially on the Westside. While the Sheriff claimed his team would engage in outreach for a few weeks before clearing the area by the 4th of July, his outreach team is not connected to the housing and service organizations in Venice and there are nowhere near enough resources, unfortunately, to house everyone in three weeks. Additionally, outreach connected to threats of enforcement and displacement only further isolates most people who have been pushed around from the streets to shelters to jail and back to the streets for years,” reads the statement from Grass Roots Neighbors, Safe Place for Youth, Venice Black, Indigenous and People of Color Elders, Venice Community Housing, Venice Equity Alliance, Venice Family Clinic and Venice Justice Committee.

“Not one politician, one law enforcement official, one non-profit, one neighborhood group is going to suddenly have the ability to solve this crisis because it’s summer and people think that tourists, visitors and local housed and unhoused people are unable to share the beautiful and inclusive space of the Boardwalk and Venice Beach. We actually can share the space, be kind to unhoused neighbors, continue the local outreach and street medicine efforts that support people until they are housed, and put more resources into permanent housing solutions for folks on our streets,” the statement continues.

In stark contrast to this statement, on June 14 another collection of Venice organizations announced their support for Villanueva’s plan. These groups are the Venice Stakeholders Association (VSA) and Venice United, representing residents, and the Venice Chamber of Commerce and Venice Beach Merchants Association.

“The Venice community has longed for just this kind intervention for several years,” said Mark Ryavec, VSA president and member of the Venice Neighborhood Council.

“The City of Los Angeles has abandoned us and ignored our repeated calls for enforcement of the city ordinance that bans tents and camping in city parks and beaches,” Ryavec added.  “It’s enforced at Will Rogers Beach and in San Pedro’s beach parks, but oddly not enforced in Venice.”

George Francisco, the president of the Venice Chamber of Commerce, said, “The city’s failure to help those living on the beach to find shelter has hurt the homeless…and has hurt hundreds of our businesses.  Sadly, it has made the public scared to visit Venice.”

“We applaud the Sheriff’s decision to assign the highly-experienced HOST team to help this population link to services and shelter,”  Francisco added.