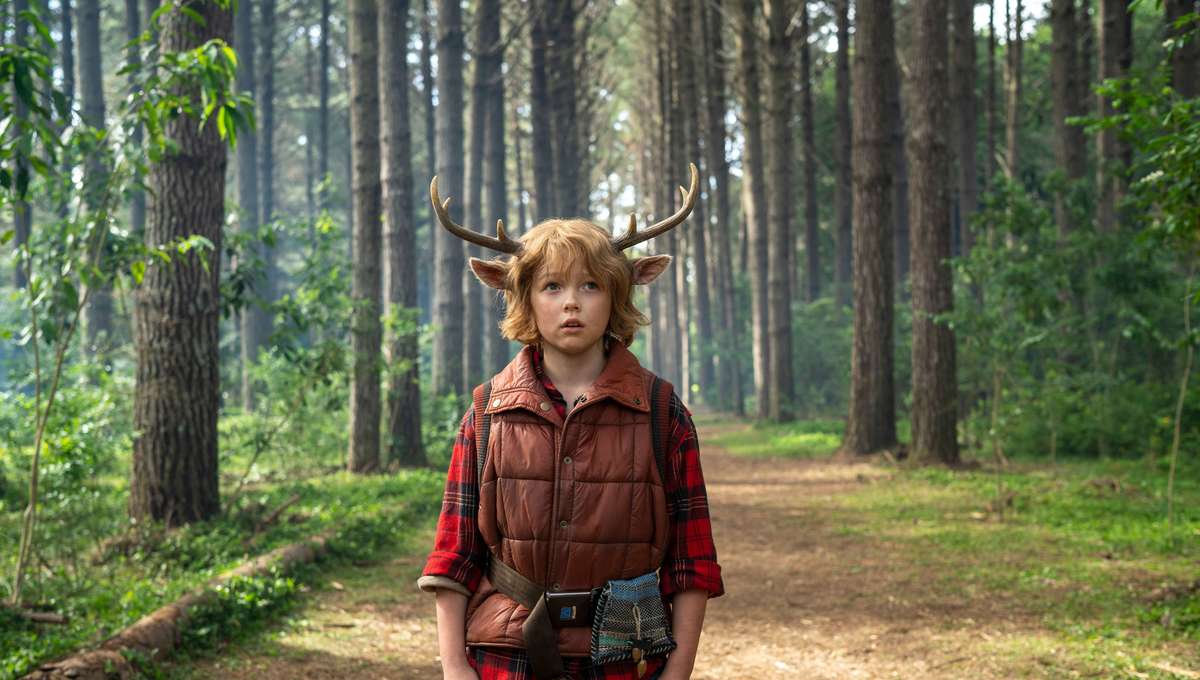 At first you may say to yourself, “Oh this is kinda cheesy.” Give it a few minutes…I’m pretty sure you’ll be completely awed, upon being swept into the world of Sweet Tooth. It really is another dimension, yet reflects our world with a painfully sharp focus. The environment is not flashy, and the simplicity of it lets it seem real.

It’s an idea as ancient as the art of storytelling to imagine beings that are part human and part animal. Sweet Tooth brings to light our severely broken connections with nature, our fragile relationships with the animals, plants, insects, bacteria, viruses and natural elements and forces that surround us. The idea of disease causing horror and isolation and a situation we cannot control, seems part of our human history and it certainly hits home today.

Sweet Tooth is based on an American comic book of the same name, written and drawn by Jeff Lemire and published by DC Comics in 2013. The TV series created and directed by Jim Mickle loosely follows the Lemire’s story. Mickle was inspired to make films when, as a young teen, he first saw Army of Darkness (1992) starring Bruce Campbell. Later Mickle and a fellow NYU student developed a horror film about gentrification in New York City called Mulberry Street. In July 2020 New Zealand granted permission for Mickle and his team to film Sweet Tooth, in spite of COVID restrictions. The production was delayed when conditions worsened. They finished the shoot in December 2020.

The cast is not made up of big name stars. Mickle had the courage to cast relatively unknown actors. The star of the series, Christian Convery, was born in Vancouver, BC in November 2009. His first acting job was in a toilet paper commercial in Toronto. He has gone on to play major roles in films such as Hearts of Spring, Playing with Fire, and Beautiful Boy. As “Gus,” or “Sweet Tooth” he is completely believable and charming. Nonso Anozie is his unlikely companion, “Jepperd” or “Big Man” as Gus calls him. Anozie is of Nigerian descent, born in London. At 6’6” he is a superb artist who began his career as an award-winning Shakespearean actor. One director said of Anozie’s work, “I need to say about Nonso that he is one of the most promising and soulful young actors I have encountered in England.” The other cast members are all remarkable. James Brolin narrates the story.

This is an absolutely imaginative show with many creative elements. Each main human character’s introduction begins with a montage of the people they interacted with on a daily basis during normal times – just a short clip of these people. Due to the skill of the director, these faces seem familiar and plaintive. You identify with them.

What seems at first to be a simple fantastical saga of a post apocalyptic world is really a fairy tale for our times. It addresses our fears, our wonder and ultimate insecurity about our place in the world. As discoveries in physics about the universe and our planet expand, they seem to magnify our feeling of smallness in the greater order of things. The sense of being a tiny part of a larger universe, of insignificance, is frightening when we truly face it. Yet when we enter the realm of imagination, we see that in fact each of us is as vast as the cosmos itself. This is the magic of a story like Sweet Tooth.