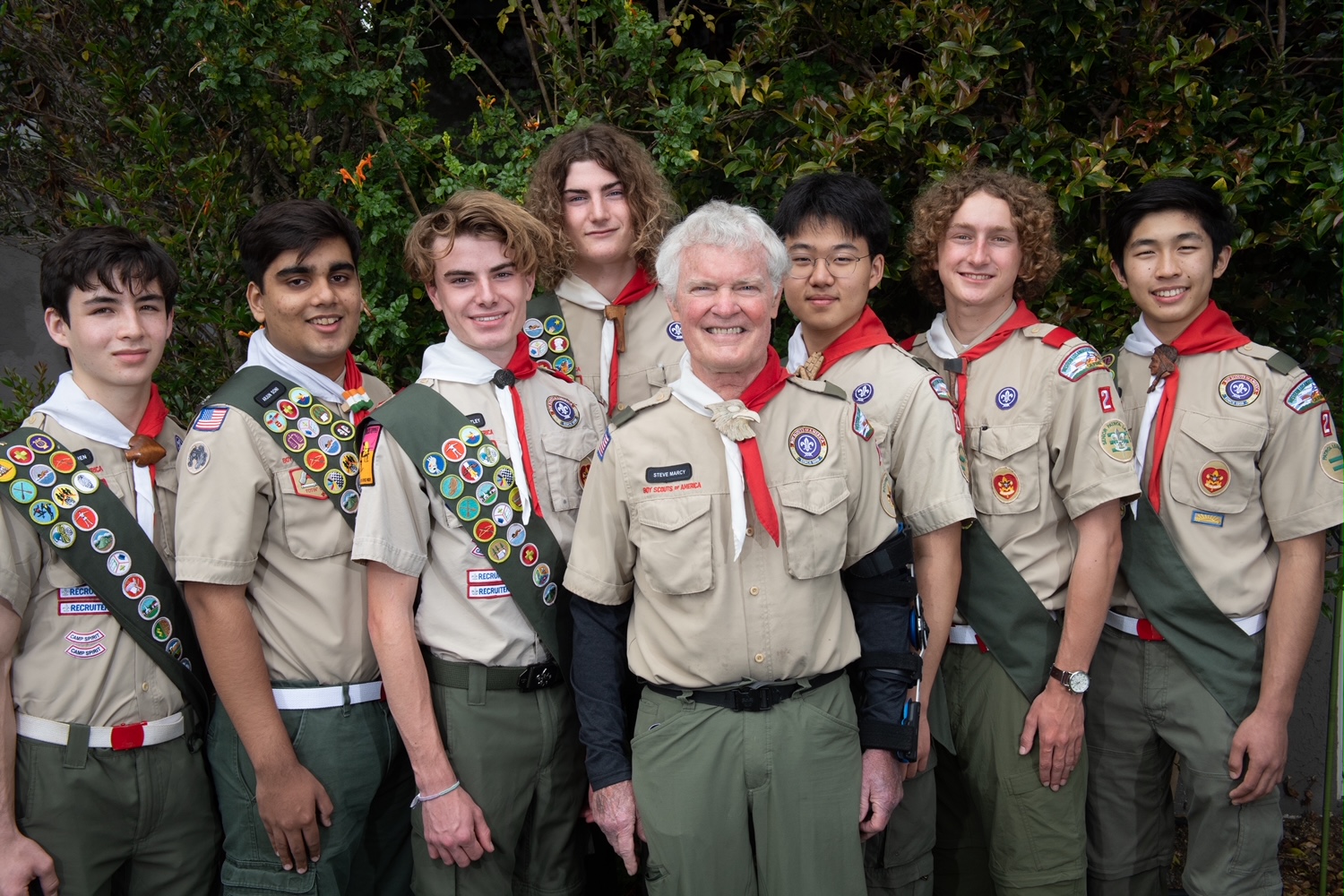 In June 2021, eleven Santa Monica teenagers will be recognized with the highest rank one can earn in the Scouts BSA (formerly Boy Scouts of America). Four of the eleven earned the honor in 2020 but were denied an official ceremony due to the Covid-19 pandemic.

All eleven Scouts will be honored at the Troop 2 Eagle Court of Honor on Sunday, June 13th. The private ceremony will be held at the Gabrielino Tongva Springs in Los Angeles.

The Eagle rank honors exemplary effort, leadership, and service. Only six percent of Scouts achieve the rank of Eagle. In addition to demonstrating proficiency in first aid, citizenship, camping, swimming, emergency preparedness, and many other skills, Eagle candidates must coordinate and complete a community service project that demonstrates significant leadership abilities. Each of the Scouts being honored led a major project to improve the quality of life of people in the community. All projects included many hours of planning and manual labor by Troup 2 Scouts, working under the direction of the Eagle candidates.

Trent Schroer designed and built a sandbox for the Westchester Parents Nursery School to replace an old sandbox. The new sandbox is 28′ by 22.5′ and is filled with fifty thousand pounds of sand. The children at WPNS were able to briefly enjoy Trent’s sandbox before quarantine started, but he made sure that they will be able to enjoy it long after the quarantine ends. Trent gives a special thanks to Gary Pavlica for coaching him with the building of the sandbox.

Nicolas Vaillancourt developed his Eagle Project to help grow the local FIRST Tech Challenge robotics community for the years to come. For two days in December, Nicolas led 30+ volunteers in constructing field perimeters for robotics competitions. He then donated these perimeters to novice teams in economically disadvantaged communities in the Los Angeles region. Nicolas is happy that he was able to share his love for robotics to inspire future generations of students at schools with limited STEM learning opportunities.

Brian Yang did his Eagle Project at the Gabrielino Tongva Springs Foundation, a Native American Reserve. He removed invasive ivies and juncos plants from the reservation and replanted some of it with native plants. Brian wanted to preserve both the land and culture that the reservation held. Some of the most challenging parts of the project were to direct the Scouts to do the labor, because it was more difficult than expected.

For his Eagle Project, Michael Yang designed and constructed two storage containers at the University Parents Nursery School. He repainted faded lines and floor markings for door openings on the ground and tidied up the outdoor yard and play structure. His hope was to give back to the Westwood community and provide the nursery school with a refurbished yard and additional infrastructure to help all of the students and parents. During his project, Michael enjoyed the technical aspects of constructing from a design and learning how to adapt to unpredictable situations.

Dakota Bartley’s Eagle Project took place at The First School, a preschool in Santa Monica. The project involved stripping off sun-damaged, peeling paint in the school’s exterior courtyard area, which was then repainted. Because this project was carried out during the pandemic, scrupulous planning was required to ensure a safe and efficient environment for all of the volunteers. Dakota was very appreciative of the Scout volunteers who helped him transform the school’s courtyard into a welcoming setting.

For his Eagle Project, Connor Burton Chen organized donations of food, clothing, sanitization items, and more to The People Concern, a local nonprofit organization assisting the homeless population of Los Angeles. He says that while his goal of assembling 50 care packages over the course of his project felt ambitious, having a supportive team of Scouts, friends, and family made this an attainable and fulfilling mission.

Brian Kim’s Eagle Project was at the Gabrielino Tongva Springs Foundation and involved landscaping around the upper pond. This work involved clearing the area of invasive plant species, which were then replaced with native varieties. Brian says he was proud to contribute to the preservation of this historic area for the community to enjoy.

Jacob Jong Won Kim’s Eagle Project took place at the Kuruvungna Springs, a sacred Tongva Native American freshwater spring preserve in West LA, where he landscaped one of the ponds and replaced invasive plants with native varieties. Although there were some unexpected complications, Jacob says that the hard-working nature of the Scouts and their skills in cooperation allowed the project to be completed effectively and efficiently. He remarked that it was very rewarding to see the results of his project when he compared the final result to photographs of the prior state of the site.

Arjun Soni’s Eagle project involved revival of the medicinal herb garden at the Historic Gabrieleno Tongva Native Springs. Restoring the garden was a step towards bringing this heritage land back to life. The project will ensure sustainability, and bring others an awareness of its denizens. It also encourages knowledge of the various medicinal and therapeutic uses of these native plants. In these challenging times, the Scouts proved that with discipline and coordination a team can complete the most challenging missions.

Oisin Whitebloom’s Eagle project was fixing, reinforcing, and covering a Kiiy, a type of hut historically made by the Tongva Tribe for sleeping and cooking, with Tule, a type of reed. The work was done at the Gabrielino Tongva Springs in Los Angeles. The Project involved collecting, shaping, and weaving Tule onto the Kiiy. The Tule used was donated by the The Ballona Wetlands State Ecological Reserve. The work provided Scouts with knot tying skills, woodworking skills, and knowledge on the Tongva tribe. The most challenging part of the project was gathering and transporting the Tule from the Ballona Wetlands to the Tongva Springs.

Jack Zemke’s Eagle Project took place at the sacred Gabrielino Tongva Springs and involved clearing, leveling, and installing a flagstone observation area adjacent to a pond on the site. The newly installed feature allows visitors to stand at the water’s edge and take in all the natural beauty that the Tongva Springs have to offer. Jack says his favorite part about the project was working in a beautiful area with a rich culture and history.

Troop 2 is one of the oldest and largest Scout troops in the western United States. In its remarkable 74-year history, Troop 2 has awarded Eagle Scout rank to 375 deserving individuals. The storied troop has traveled to Scout camps and high adventure destinations throughout the United States, and all together Troop 2 Scouts have saved more than 67 lives using CPR, water rescue, first aid, and other skills and training.