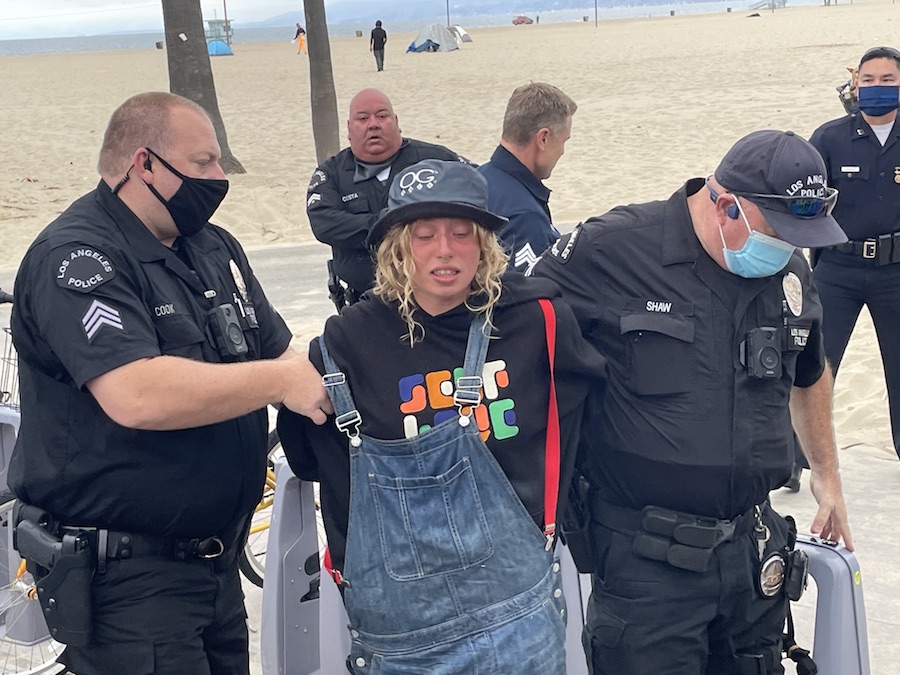 A woman wielding a knife got within feet of LA mayoral candidate Joe Buscaino at a Venice Beach rally this morning near the Santa Monica border.

The incident occurred just moments after Buscaino finished delivering his remarks calling for “common sense, not nonsense” when it comes to dealing with homeless encampments in Los Angeles.

Nico Ruderman, standing close to Buscaino, was watching the woman – known locally as “Angel” – because she “looked a little off.”

Venice resident Nico Ruderman says he locked eyes with the woman who said “I’m going to start killing people.” He took off running with @JoeBuscaino.

Ruderman came to listen to the speech and is behind the campaign to recall @mikebonin. pic.twitter.com/mSRpRql23y

In Santa Monica overnight camping on public property is illegal (and enforced); in Los Angeles, encampments on sidewalks and the boardwalk are tolerated.

LA needs to do more to break the cycle of poverty, build housing faster and provide job training, said Buscaino. Affordable housing options of all varieties need to be approved, according to Buscaino.

Every neighborhood needs the equivalent of a senior lead officer – a highly successful LAPD program – who specializes in dealing in outreach efforts to homeless individuals, Buscaino argued.

Buscaino called for an end to LAHSA (Los Angeles Housing Services Authority), which he said represents an ineffective use of $300 million a year.  The City of Los Angeles contracts out much of its homeless program to LAHSA.

“We need to be nimble,” said Buscaino.  “LA is facing an emergency and we need to act with urgency. Nothing is impossible.”

The Santa Monica Mirror has reached out the LAPD requesting more info surrounding the incident. In an initial response, the Department said that “The suspect has not been booked, she is still in process. Once she is booked we will release the information.”