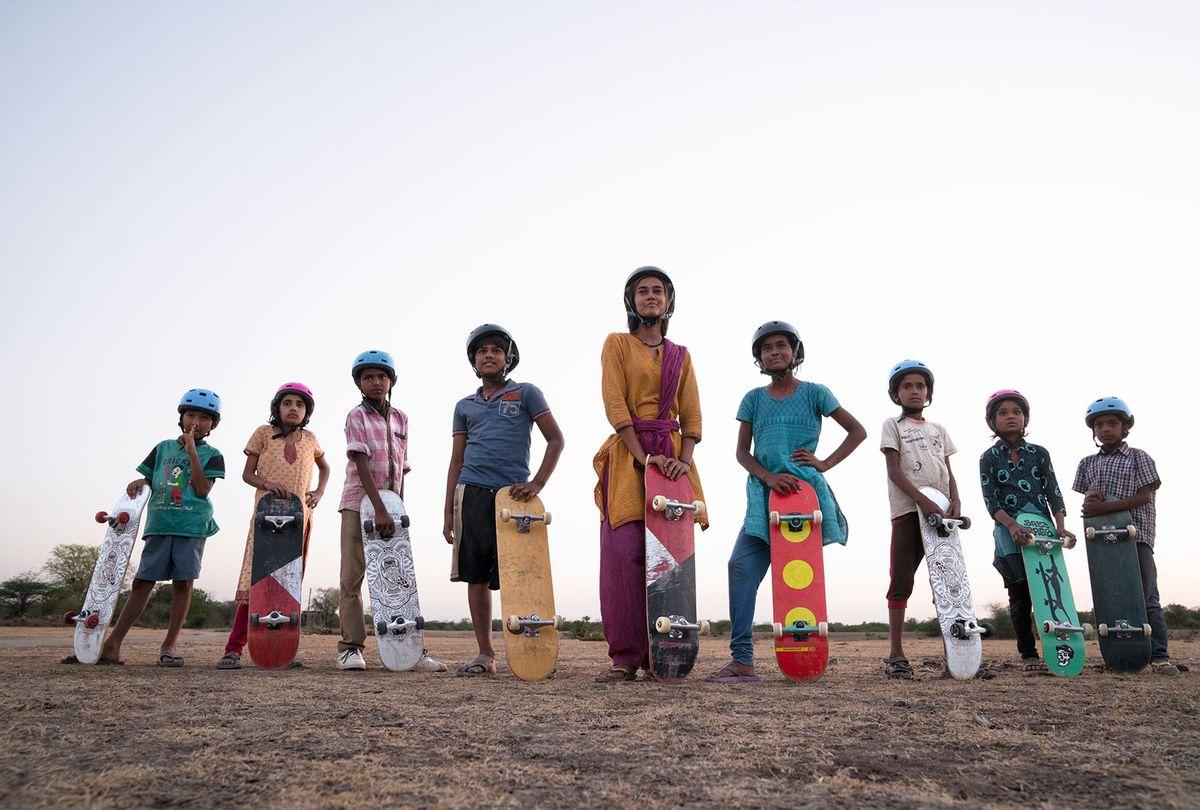 Skateboarding, like cycling and running, connects you to the earth while giving you a sense of flight and freedom. It’s exhilarating and different from any other sport. I’ve known avid skateboarders who travel to other cities to experience famous skateboarding locations. The effect of mastering the sport, even with rudimentary skill, is magical. Now skateboarding is an Olympic sport, first included in the Games in 2016.

This very special movie, Skater Girl, is about how the art of skateboarding changes the lives of some enterprising kids in a “lower caste” village in India. It’s a heartfelt story of a girl trying to break out of the framework society has placed on her bound by age-old restrictive tradition. She discovers and falls in love with this sport that will crack the boundaries of her existence. The film was shot on location in one of the poorest areas in central India, Khempur, Rajasthan, in 2019.

Santa Monica resident Michael Pellico is one of the producers of Skater Girl. He happens to be my neighbor, so I was able to find out first hand about the making of this film. Pellico is a gifted medical researcher, chemist and inventor who has developed groundbreaking products. He’s also a screenwriter, and a writer of short stories and wonderful children’s books, inspired mostly by his niece.  The oldest of eleven children whose parents both worked long hours, Pellico helped raise his siblings in Chicago. He entertained the kids with stories. Today he enchants his nieces and nephews with his tales. He is an example of my theory that scientific and mathematical brilliance is usually accompanied by a vibrant imagination.

The film’s director/writer/cinematographer Manjari Makijany, is the daughter of a Bollywood actor. She completed UCLA’s Professional Screenwriter Program, worked as a second assistant director, and was one of eight women chosen to participate in the AFI Conservatory’s Directing Workshop for Women in 2016. She has directed award-winning short films.

Pellicol met Makijany while working on another Indian film in 2017. He says that in the beginning the Skater Girl script had almost a documentary feel and he helped with the evolution of the narrative into more of a coming-of-age story and social commentary. He feels that it’s important that each scene unfolds as it would in real life. The filmmakers interviewed hundreds of kids about the story and it became a composite of the experience of the youth of India.

The actors are very real – the filmmakers used actual residents of the location to portray the villagers and kids. This is the first film for Rachel Saanchita Gupta. She plays the central character, “Prema,” who struggles painfully to embrace her new sense of identity against a backdrop of grim cultural boundaries set in the history of her society. Amy Maghera and Jonathan Readwin play the catalysts who bring a new world view to the village in the form of skateboarding.

Skater Girl crosses cultural and stylistic lines between Bollywood and Hollywood, with skateboarding instead of dancing bringing the village enlightenment and joy. This is an uplifting movie you can watch with the whole family. An added positive outcome of this film is that one of the largest skate parks in India, at over 15,000 square feet, was constructed as part of the film sets and is now a beacon for skaters throughout Rajasthan. In a sense it provides an escape from the weight of the world.