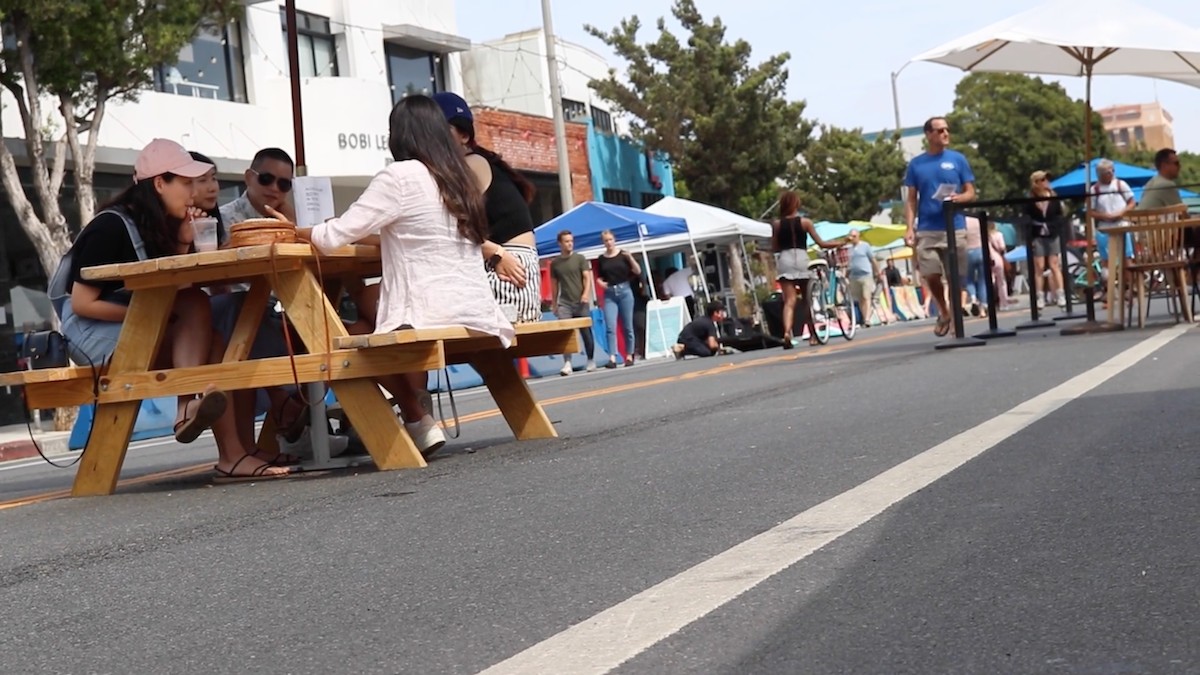 The summer’s second iteration of pedestrian-only use for a segment of Santa Monica’s Main Street will take place this weekend, a program that during the first weekend most attendees said was positive but less than half of merchants said it led to better business.

The pilot program, initiated by the Main Street Business Improvement Association (MSBIA) and Ocean Park Association (OPA), was approved by Santa Monica City Council in June and debuted July 24-25. Known as “Sharing an Open Main Street”, the program applies to the two blocks between Hill and Kinney streets.

According to the City of Santa Monica, based on an on-site survey conducted by OPA and also survey responses received after the weekend, a majority of residents indicated the first weekend in July was a positive program.

“An on-site survey taken during the first Sharing an Open Main Street in July found that 95% of 241 respondents were positive about the pilot. About two-thirds noted the ‘positive impact’ on the community and Main Street businesses. The respondents said they ‘enjoyed the community/family nature of the event,’ and ‘felt safe,’” wrote Debbie Lee, Santa Monica’s Chief Communications Officer, in an email statement. “Including additional survey responses after the weekend (total of 491), 76% of respondents were positive overall versus 19% negative, with about half requesting more activities and entertainment for the upcoming weekends.”

In addition, 80 percent of attendees said they walked or cycled to the event, per the survey.

According to Lee, the City has received seven emails from residents that shared their view that the closure didn’t add value to the community and caused more traffic.

“Staff will continue to closely monitor the three remaining pilot events in collaboration with MSBIA and OPA as well as take steps to mitigate any issues that may arise,” Lee said.

The OPA survey also showed 69 percent of respondents spent more time on Main Street due to the event and 76 percent wanted to attend future events. According to the City, based on the results of this survey this weekend there will be more activities and entertainment throughout the open street in response to community feedback.

In a separate study conducted by the MSBIA, 47 percent of businesses said their business did better during the event, 29 percent said about the same, 14 percent said worse and 10 percent responded “other”. Among businesses, 55 percent said they loved the sense of community and 51 percent loved the absence of cars. In addition, 45 percent said they saw increased foot traffic as the biggest benefit of the program while only 32 percent said it brought a new sense of life to the corridor.

From an operational perspective, the City said it monitored traffic and pedestrians during the first weekend and has made adjustments to the traffic control plan to reflect a full closure at Main and Ashland for this upcoming weekend.

“This will improve pedestrian flow and continuity. The City will also continue to disable all e-scooter and e-bike use within the pedestrian zone to reduce potential conflicts among the various modes,” Lee said.  “The City will continue to evaluate the pilot closure by collecting and assessing traffic volumes and on-street parking activities. Baseline data was collected prior to pilot closure and again during the first weekend. A memo summarizing the findings will be provided to City Council this fall.”